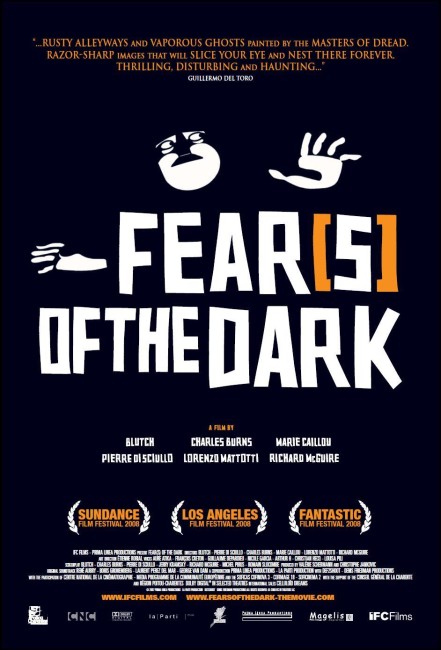 1:- A cruel marquis hunts people with his vicious hounds. 2:- Eric is a lonely child who grows up with a fascination with insects. Going to university, Eric’s loneliness intensifies as he finds he does not know how to relate to people. In the library, he meets Laura, a student in one of his classes, and summons the courage to ask her out. Their date goes very successfully and she invites herself back to his apartment for the night. Soon after, she settles in, becoming attentive to Eric but increasingly controlling and resentful when he has to go out for any reason. 3:- Japanese schoolgirl Sumako Ayauma registers at a new school but is taunted by her classmates because she lives near where the famous samurai Hajime was killed. Travelling home, Sumako is haunted by ghosts as she nears Samurai Hajime’s grave. In between, she keeps waking up in a hospital as a doctor forces injections into her. 4:- A young boy and his friend speculate about the disappearances of people and animals in their village. His friend then goes missing too. The villagers bring in a famous hunter to track and kill the beast responsible. 5:- A man takes refuge from a snowstorm in a big empty mansion. As he wanders in the dark with a candle, he realizes that the house may be haunted.

Fear(s) of the Dark is a French-made film that is a compilation of animated shorts from various directors, all on horror subjects (or perhaps more accurately the assigned subject of fear). The directors are all previous unknowns who mostly come from a background in graphic novels and illustration – at most, a couple of them have made a single short film each prior to this.

None of the stories are given a name. There is a loose connecting thread that comes interspersed between the segments where various abstract patterns play out on the screen, narrated by a voice that seems afraid of everything. It is a rather vague piece that seems to have been narrated stream-of-consciousness. If nothing else, this episode should at least be commended for taking the fear aspect of the title literally.

The first segment from Blutch concerns a marquis and his pet hounds, which he enjoys unleashing to terrorize whomever he comes across. For reasons not clear, this segment is broken up into pieces interspersed between the first three stories. One suspects this is a technique that weakens the segment as a narrative. The story is not strong – it consists of no more than the marquis attacking various people before an ending where the dogs turn on him – and the break-up tends to make it even more diffuse. The episode however does have some exquisite, highly expressive pencil-drawn animation and shadings that look like the engravings of Gustav Doré.

While this episode fails to work, the second story (the bug episode) works extremely well. In an abrupt stylistic change, the marquis story’s pencil shadings are replaced by stark solid-line drawings, which appear to have been conducted by an ink or felt pen, and the difference in styles is abrupt. The story discovers a headspace like something out of Franz Kafka’s Metamorphosis (1915) or David Cronenberg’s The Fly (1986). The director successfully pinpoints the state of mind of a person who is extremely isolated. The relationship that develops turns into something disturbing and the overall effect is creepy. Of all the stories in the film, this is the one that works the best as an actual horror story, as opposed to an episode where one is impressed by the artwork and animation.

The third episode is a slight piece that the director in question had made as a homage to Japanese horror. One tends to feel that Japanese horror has become a muchly overworked vein in recent years, both by the Japanese and the Americans who keep remaking into English every successful work to emerge, and that there is not enough of a distance in time for the episode here to be making homages. This episode has even less narrative than any of the others and the big twist ending is anticlimactic. The artwork is again different to any of the other episodes, resembling something that embodies both traditional Japanese elements but giving the impression it has all been composed on a computer.

It is debatable which of the episodes has the most dazzling artwork, but the two last episodes surely hold the contest in a dead heat tie. The fourth episode is a monster story where the artwork comes in dazzling impressionistic shadings that make great play out of the ambiguity of shadow. The episode captures a remarkable atmosphere. The main parts of the story about the hunter tracking the crocodile are straightforward but the hunter and the shooting of the crocodile are exaggerated stylised figures that take place in an impressionistic swirl of half-shadows.

The narrator’s introduction to the story comes in a series of impressionistic images where one scene is constantly morphing into the next like some trompe l’oeil image. The most haunting aspects of the episode are the narrator’s belief in dream figures coming down from clouds and his claim to maybe see his missing friend as a figure hopping across the fields. This is one episode that one wishes had been stretched out to a full-length film.

The other episode that dazzles artistically is the last. Again, on a level of plot description, this is fairly straightforward as a story – a man takes refuge in an old mansion and realizes it is haunted. However, all the effect in the episode comes in the artwork. This is composed all in solid blocks of either white or black (indeed, the only colour throughout the entire film is some red blood splattered in the Japanese episode).

The figures in the episode are often crude and repetitive shapes and patterns but all the effect comes in the way the man’s torch lights up an entire room or shows the ghost girl behind him amid the patterns, or in the contrast of black and white – a tiny speck of light opening up in a entire frame of black as the man tries to break out of the attic, the boys outside disappearing and reappearing amid the field of all-white as they run up and down the hill and especially the final wide-angle shot of the house with the man trapped inside surrounded by an entire blank screen of white snow.