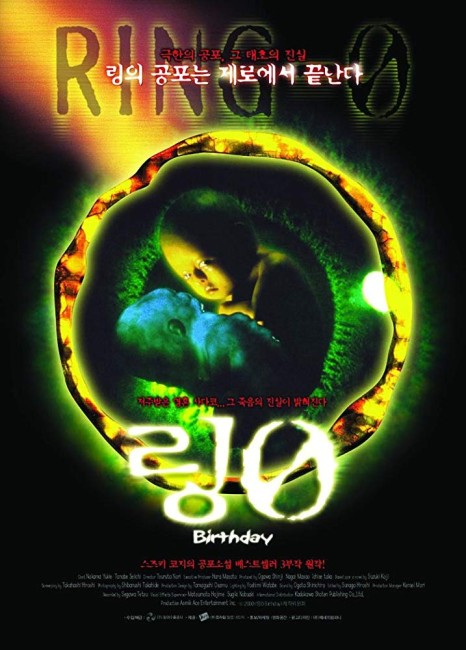 Thirty years earlier. All the journalists that were present at the ESP experiment trials involving Sadako Yamamura’s mother have been mysteriously killed. The reporter Miyaji tracks Sadako down where she is now a student at a drama class in Tokyo. Sadako gets the lead role in a play after the actress that she is understudying for dies in mysterious circumstances. Sadako is attracted to the soundman Toyama but the others in the cast find her strange. Miyaji’s arrival serves to bring out Sadako’s disturbed past and her latent psychic powers.

This time Hideo Nakata, the director of the first two films, is no longer involved, although the prequel does feature a screenplay from Koji Suzuki, who had written the original novels that had spawned the Ring phenomenon. There are several things that are immediately noticeable with this sequel. The first of these is that the new director Norio Tsuruta has affected a change in the mood of the films. The first two films founded themselves on a series of way-out scares, where director Hideo Nakata achieved a genuine sense of eerie unworldliness; Ring 0: Birthdays is much quieter by comparison.

Certainly here Norio Tsuruta creates some spooky moments – the scene where the girl in white drifts through the dressing room, presaged by the sudden still fall of red rose petals; and a lovely moment shot in all medium angle as Sadako approaches a patient in a wheelchair at the hospital, touches him and then suddenly he gets up and walks. Most haunting of all is Yukie Nakama, who has a blank, intensely introverted presence as Sadako. She has the ability to communicate a haunted stillness simply by her look alone.

On the other hand, some scares are simply repetitions of those from the other two films – the appearance of the mother whose reflection flip-flops in a mirror; and a variant on the climactic appearance of the Sadako from the tv screen. Mostly, Ring 0: Birthdays is so quiet that in comparison to the other Ring films that it seems almost fatally underwhelming in impact and undeniably a disappointment.

What is also more than clearly apparent from Ring 0 is that the entire Ring franchise was never intended as a coherent saga. In attempting to expand it out and tell more about the Sadako story and her mother both in both Ring 2 and here, the producers/writers have ended up creating an incoherent hodgepodge of ideas. It is never entirely clear, for instance, where Ring 0: Birthdays is meant to fit into the Sadako backstory. Little is explained about the experiment and the mother’s suicide, which are the events that one was interested in hearing about, not the vague psychic powers-come-Carrie (1976) takeoff that this film seems intent on conducting.

More importantly, nothing at all is explained about why the mother’s ghost is lingering, and crucially, how we go from Sadako being disposed of down the well to the creation of a cursed videotape that kills people within seven days. Even more confusingly, Ring 0 introduces the notion that there is not one Sadako but two and that there is a twin sister floating around amidst all the hauntings somewhere.