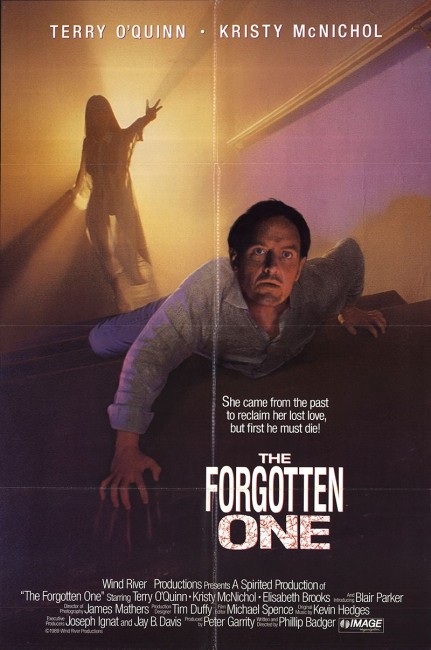 Writer Bob Anderson, moves into a new house, still grief-stricken by the death of his wife. However, the house appears to be haunted. Gradually Bob becomes involved with two women – neighbour Barbara Stupple and another woman Evelyn James. It becomes apparent that Evelyn is the ghost of a woman who was bricked up alive by her husband in the last century and now wants Bob to join her on the other side.

The Forgotten One starts out as a promisingly above average ghost story. It doesn’t quite succeed but it is certainly more interesting than the usual run of campy splatter films out there. It is an old-fashioned ghost story and it engages in some rare things these days like atmospheric build-up.

Director Phillip Badger creates some often subtle moments – the ghost being seen in the bath but there only being a candle that snuffs out in the breeze when a person enters; or a love scene where we suddenly realize that the ghost’s seduction of Terry O’Quinn is really an attempt to kill him by leaving the gas on. However, the film is a little too sedate and slow-paced to truly stand out and it is only the downbeat ending that unexpectedly reverses expectation that lifts the film out of the routine. It is also very darkly photographed, which makes for difficult viewing on the small screen.

Terry O’Quinn is a fine actor whose friendly, naturalistic charisma and Southern drawl can often be one of the best parts about a film or tv series – see The Stepfather (1987) or tv’s Lost (2004-10). Unfortunately, the film gets him to drop this and play in seemingly random bursts of craven hysteria and cringing cowardliness. It is a genuinely unappealing performance – one keeps wondering what the three women in the film, who are all attracted to him, see in him.