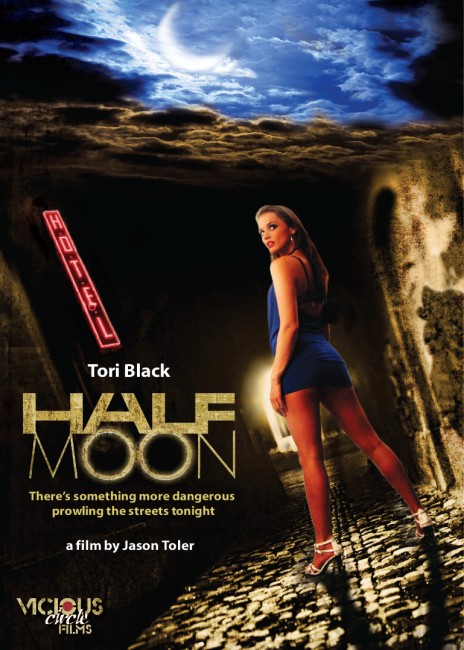 The prostitute Rose walks the streets. A fellow prostitute Tammy tells her how she is awaiting a call from a customer who is going to pay her $3000 for one night. Tammy leaves her handbag with Rose while she goes to pee in an alley, only to be busted by a cop. Just then Tammy’s phone rings and Rose answers and goes to a motel room to meet the $3000 client Jacob. He asks Rose to sit down and eat with him. He seems to prefer to talk rather than have sex and she finds that he is ill. When she goes into the bathroom, she discovers a bag that contains a gun, drugs, handcuffs and ropes. She panics, thinking he is going to assault her and jabs him with one of his syringes. She calls her pimp for help and they try to break into Jacob’s safe while he is unconscious. When Jacob comes around tied up, he tries to persuade Rose let him go because he is a werewolf and about to transform unless he can obtain treatment.

Half Moon is a debut feature from Chicago-based Jason Toler. Toler is an African-American director who had previously worked in music video. The most notable name on the credits of Half Moon is that of Tori Black. I had no knowledge of Tori Black before watching Half Moon but find that she is a 23 year-old adult film actress who has appeared in no less than 195 pornographic films between 2007 and 2011 – that is an average of 48 films per year (nearly one per week – and we’re not even at the end of 2011 yet). The other girls in the cast are also played by adult film actresses. It appears that since the success of Zombie Strippers! (2008) with adult actress Jenna Jameson that porn stars have been now turning to the horror genre to go legit – see also Bloodlust Zombies (2011) with Alexis Texas.

I am not giving away any major surprises to by letting people know that Half Moon is a werewolf film. Even though the film keeps you in a state of doubt about such for most of the running time, this big surprise is clued away on the film’s dvd cover. In an interview, Jason Toler tells how he made a point of conceiving the film for shooting on a low-budget – as a result, he has contained the entire film in a single motel room with the exception of about three scenes at the start and end.

This gives Half Moon an unusual set-up – the entire film consists of a prostitute (Tori Black) and a john (Marek Matousek) in a motel room talking. It almost makes Half Moon into a lycanthropic My Dinner with Andre (1981) – although the genre film it most resembles is Dance of the Damned (1985), which had a stripper and a vampire becoming friends and discussing their mutual lives. There is a Lewtonian aspect to the film here where Marek Matousek claims to be a werewolf but the film remains carefully ambiguous about such until the very end, offering arguments both for and against Tori Black believing these claims.

I was impressed with what Jason Toler pulled off with Half Moon. There is the odd technical gaffe – some slight dropoffs in sound recording quality between shots, video-shot camerawork that is occasionally rough around the edges. There is a surprisingly convincing full body werewolf effect that appears at the end, although this is slightly undone by a cheap morphing effect to represent the transformation.

That is not important, as the rest of the film is more than successful in carrying Jason Toler’s vision over any technical rough spots. The set-up and the confrontation between the two characters is interesting. Particularly well written is the section towards the end where Marek Matousek tells Tori Black that she has no idea what it is like having no control over his body and she responds with a “yes, I do” and proceeds into a monologue about how she does so every day dealing with clients and pimps that only want to use her rather than show any human affection.

The two principal characters are well conceived and the two actors do a good job in playing them. Particularly good is Marek Matousek, a previous unknown who plays the part with a courteous charm and likeability. Indeed, Matousek is an actor that one fully expects to be hearing more from sometime soon.

Tori Black is a more mixed option. There are times you are not sure if her empty-headed thing is an act or not. Nevertheless, by the end of the film, she carries the complexities of the character, which range between streetwise toughness and a vulnerability, with credibility. There is also a strong and convincingly assertive performance from Torey D. Sutton as Tori Black’s pimp.