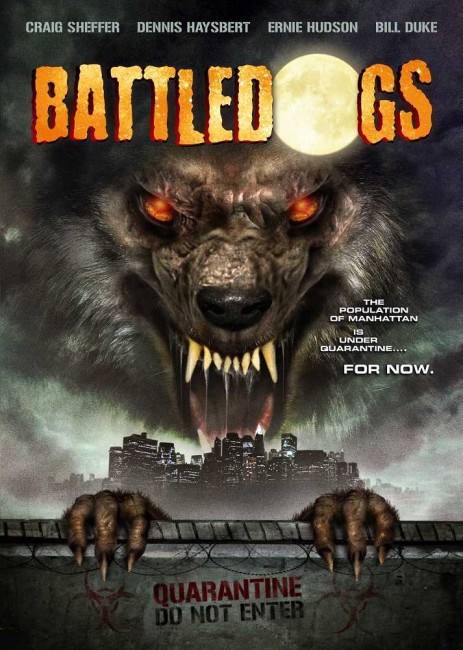 Wildlife photographer Donna Voorhees is passing through JFK Airport, returning from the Canadian wilds. In the women’s bathroom, she transforms into a werewolf. As she rampages through the terminal, her bite infects others and they in turn infect dozens of others in very quick course. The military arrive and gas the wolves where they are transported to Ward’s Island. USARMID doctor Major Brian Hoffman is brought in. As Hoffman attempts to locate Patient Zero and the cause of the transformation, he comes up against military head Lieutenant-General Christopher Monning who wants to appropriate the wolves as military weapons. As Hoffman tries to protect Donna, Monning decides that Hoffman is in his way and must be eliminated.

The Asylum is a company specialising in low-budget films that come out mimicking the titles of big-budget, high-profile releases in the hopes that people won’t look too closely or notice the difference. It is a strategy they call ‘mockbusters’ and has produced titles such as Snakes on a Train (2006), I Am Omega (2007), Transmorphers (2007), Allan Quatermain and the Temple of Skulls (2008), The 18 Year Old Virgin (2009), Paranormal Entity (2009), Battle of Los Angeles (2011), Abraham Lincoln vs. Zombies (2012) and Age of the Hobbits (2012), among others.

Surprisingly enough, Battledogs is not one of The Aslum’s mockbusters but is another of their regular monster movies. The film is directed by Alexander Yellen who has worked as primarily a cinematographer on other Asylum and low-budget films, as well as occasional second unit director. The only other film Yellen has directed was the subsequent horror film Finders Keepers (2014), as well as episodes of The Asylum’s tv series Z Nation (2014-8).

The Asylum’s films are often cheap and tatty, although once in a while have the capacity to surprise you and produce something decent – occasions like Alien Abduction (2005), Nazis at the Center of the Earth (2012), Hansel & Gretel (2013), Sharknado 3: Oh Hell No! (2015) and Monster Island (2019). The surprise about Battledogs is that it is one of these halfway reasonable Asylum monster movies.

The premise of werewolves being co-opted as potential weapons is an original idea and the film makes an interesting and worthwhile script out of it. The film dispenses with much in the way of werewolf lore – no full moons and silver bullets, for instance. In fact, the term werewolf is not even mentioned once throughout. Also the werewolf bites spread more akin to a zombie infection – 200+ people in the terminal end up affected within a matter of minutes. (For a more detailed overview of the genre see Werewolf Films).

One of the major drawbacks of Battledogs is a frequent one with any film from The Asylum – the werewolf effects are cut-price digital effects work produced by The Asylum’s usual in-house crew and look frequently shabby. On the other hand, the climactic scenes with the Air Force planes bombing downtown New York contains a much higher quality of effects than the rest of the film.

The film has a far better cast line-up than usual for the average film from The Asylum. There’s Ariana Richards, once the kid in Jurassic Park (1993), in her last role before her retirement from acting to become a painter. Dennis Haysbert does a fine job filling out the cliché role of the dangerous rogue military officer. Kate Vernon turns up as scientist and Ernie Hudson as the airport’s manager, along with Wes Studi as one of the soldiers.