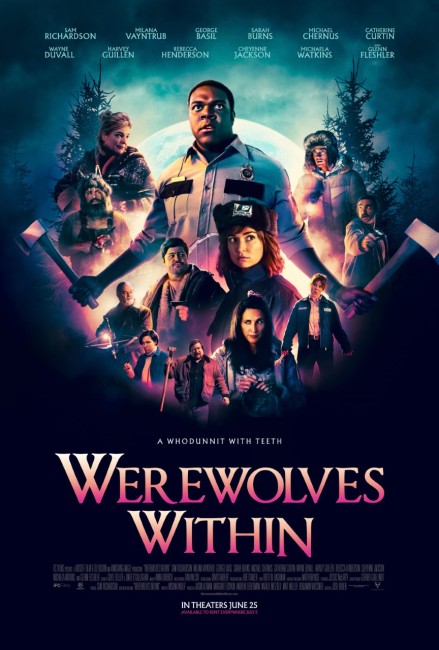 Finn Wheeler takes a position as a ranger in the remote town of Beaverfield and moves into a room at the local hotel. He is introduced to the locals by the friendly and flirtatious postie Cecily Moore. As a snowstorm affects the town, the power goes out. In going out to investigate, Finn finds that somebody has slashed all the generators. He also finds the body of the hotelkeeper’s missing husband beneath the porch. As various of the townspeople gather at the hotel for the night, the scientist Jane Ellis is certain there is a werewolf among the group. The werewolf begins attacking members of the party and the question is who among those gathered is the werewolf.

Werewolves Within (2016) was a Virtual Reality videogame introduced to be played on Oculus Rift or Playstation VR. It was a variation on the party game Werewolf where you try to guess who amongst those gathered is a werewolf while the person who is the werewolf is allowed to lie. The setting for the videogame is a Mediaeval village where players are villagers who are assigned roles like Tracker, Gossip, Astrologer and the like with each having different abilities. The players sit around a table inside VR and try to expose who among them is the werewolf.

Most videogame adaptations either fall into being action or adventure films – shooting up zombies, aliens etc, or else martial combat action or about venturing in to raid tombs, solving puzzles, joining campaigns and the like. There is almost no examples that one can point to in the list of Videogame Adaptations that does not fall into one or the other of these. Thus it is rare to see a film adapted from a videogame that breaks that mold.

My expectation from the outset was that Werewolves Within would be a variant on the Resident Evil films with people fighting against werewolves instead of zombies and mutants. However, what we get is more like a werewolf whodunnit where the protagonist is required to work out who among the people gathered at the hotel is the werewolf. Surprisingly enough, this is not the first werewolf whodunnit with the first being The Undying Monster (1942), followed by The Beast Must Die (1974), which had a hunter bringing a group of people to his estate and trying to guess which among them was the werewolf. (For a more detailed overview see Werewolf Films).

This is something that Werewolves Within pulls off in highly engaging ways. Though the mediaeval village is updated to the present day, all of the characters are written and played with a good deal of colour and in some cases a reasonable sense of humour. Milana Vayntrub steals many of the early parts of the show with her friendly, easy-going, flirtatious postie. I must admit I found Sam Richardson to be such a Chris Tucker lookalike I kept expecting him to break out into one of Tucker’s motormouth performances. The actual appearances of any werewolf are kept sparing – we see nothing until right at the end. It all works far more entertainingly than anything one expected going in,

Werewolves Within was the second feature-length film for Josh Ruben, better known as a comedy actor. Ruben had previously made the horror comedy Scare Me (2020).