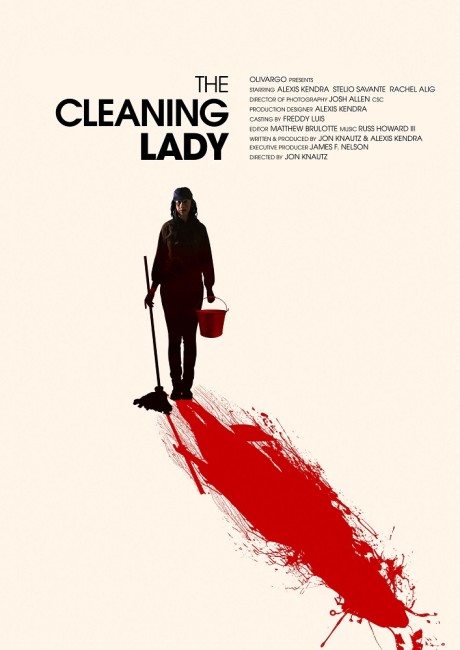 Alice is trying to disentangle herself from her married boyfriend Michael who shows no signs of leaving his wife Helen. She is attending a support group where the other attendees urge her to cut things off with him. She tries but is drawn back in by his persistence. At the same time, Alice offers Shelly, the building’s janitor, money to work as her cleaning lady. Shelly is hideously disfigured due to having had a pot of scalding water thrown in her face as a child. Alice starts to connect with the shy Shelly. However, Shelly has disturbed secrets of her own that relate back to her abusive childhood where she was forced to work as a child prostitute by her mother.

The Cleaning Lady comes from Canadian director Jon Knautz who has made other genre efforts such as Jack Brooks, Monster Slayer (2007), The Shrine (2010) and co-directed Girlhouse (2014). I was impressed with Knautz’s previous film Goddess of Love (2015), which remains his best work to date.

Goddess of Love was the first creative collaboration between Knautz and leading lady Alexis Kendra who had previously appeared in a small part in Girlhouse. Besides playing the lead in Goddess of Love, Kendra also wrote the screenplay, acted as producer and production designer. Knautz and Kendra then went on the make the basics of this film as the ten-minute short film The Cleaning Lady (2016) and then expanded it as a full-length film, with both co-writing and producing the film and Kendra playing the lead role while also doubling as production designer.

The Cleaning Lady sets up a promising scenario with Alexis Kendra as a woman involved with a married man (Stelio Savante) and trying to emotionally disentangle herself to the extent that she needs to attend a support group. Alexis seems set up as someone impossibly beautiful, leading a life of privileged assumption – it is never, for instance, made clear what she does to support herself.

The interesting scenario that comes into play is when Alexis befriends the titular cleaning lady Rachel Alig, who has bad facial burns, hides behind a baseball cap and seems so shy and downtrodden she can barely speak above a whisper. This sets up a dynamic where you are not quite sure what way the relationship is going to go – I half expected that we would have Rachel Alig going out and killing boyfriend Stelio Savante on Alexis’s behalf.

Things get decidedly strange about the time that Rachel Alig sneaks into Alexis Kendra’s bedroom and places a plaster cast over Alexis’s face as she sleeps (all without any air holes in it so it would surely be something where Alexis would not be expected to wake up from) to make a mould and we then see her taking the mask and putting it on. There is quite an unexpected jolt in the scene where Alexis Kendra lies back on her bed and is abruptly grabbed from behind by Rachel Alig.

I was expecting The Cleaning Lady would be another Goddess of Love. On the other hand, it feels like a film that assembles all the elements but never quite brings them together, There is much in the way of flashbacks to Shelly’s abusive past and alcoholic mother who pimps her out to paedophiles. We get that Shelly is envious of Alice and desires what she has. The film then turns into a muddled Imprisonment Thriller, although here the focus is all wrong – the emphasis is less on the psychology of captor and captive or Alexis’s attempts to escape than we get suspense scenes centred around the peripheral character of Alexis’s boyfriend’s wife (Elizabeth Sandy) who follows Rachel Alig to her home. When it comes to the scenes with the person locked up in the storage container, it is not even clear who this individual is.