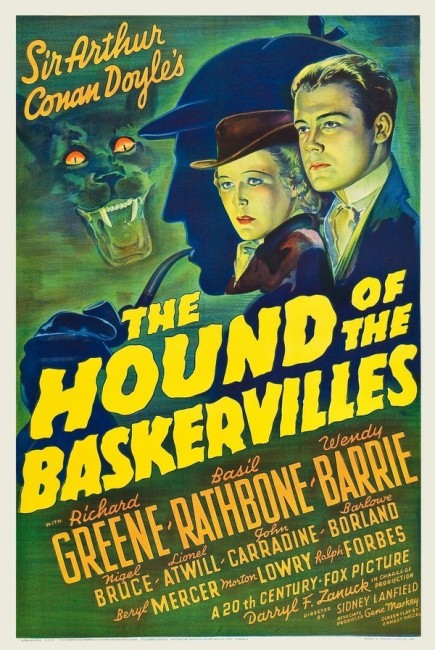 Following the death of Sir Charles Baskerville on the Dartmoor Baskerville estate, Sherlock Holmes receives a visit from a friend of the Baskerville family who is dissatisfied with the coroner’s official verdict. It is reputed that the descendants of the Baskerville family are all fatally haunted by a giant hound because of the misdeeds of a 17th Century ancestor. The latest Baskerville descendant Sir Henry arrives to accept his inheritance and immediately becomes the subject of mysterious doings as a ghostly hound is spotted on the moors. Sherlock Holmes goes undercover to ascertain the agency behind this.

Arthur Conan Doyle’s The Hound of the Baskervilles (1902) seems an odd choice to start a series with. It is a logical choice in that it is one of the handful of novel-length Sherlock Holmes adventures but it is also a story in which by any faithful telling the central character of Holmes is absent for nearly half the story. (Oddly enough though, The Hound of the Baskervilles remains the most popular of all Sherlock Holmes stories in film adaptations – see below for other screen versions).

There is an uncertainty about the adaptation here – perhaps it is that 20th Century Fox had no established cinematic English-language Holmes milieu to draw upon up to that point – and Sidney Lanfield seems caught between directing it as a gangster film and a horror film. The uncertainty is even evident in the cast list, which places boyish romantic lead Richard Greene who plays Sir Henry above the name of Basil Rathbone who plays Holmes.

The clues seem irrelevant and the exposition of the mystery takes place in several static pieces of stodgy extract. However, the film has considerable atmosphere in its seances, fog-bound moor scenes and hansom cab pursuits. The moors have a moody gloominess, although ultimately are obviously stagebound. Basil Rathbone and Nigel Bruce make a good pairing, the lean bony-faced Rathbone projecting a keen intellectual fascination and having clear fun when it comes to the disguises. Nigel Bruce perfects his jolly porridge of a Watson, a role that he turned into a reliable comic prop throughout the rest of the series.