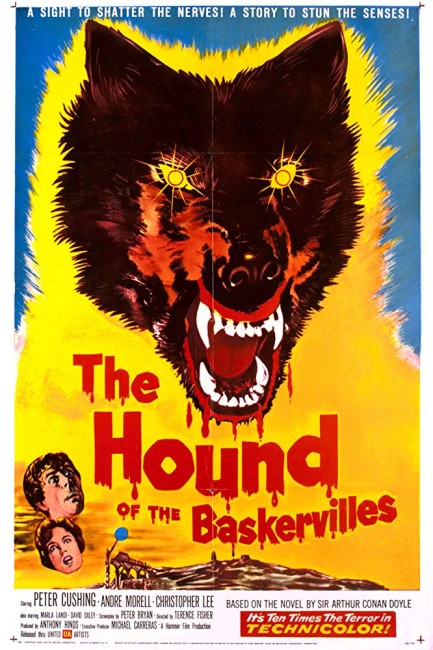 Sherlock Holmes and Dr Watson receive a visit from the physician Richard Mortimer. Mortimer tells them the story of the curse that haunts the Baskerville family. This came about after the ancestor Sir Hugo Baskerville pursued and murdered a servant girl with his dogs, only to then be killed himself by a supernatural hound. The same ghostly hound is believed to have killed all the heirs to the Baskerville title, including most recently Sir Charles Baskerville. Holmes and Watson meet the new heir Sir Henry and accompany him to the Baskerville estate in Devon. There they determine mysterious happenings and great evil are afoot. Holmes tries to get to the bottom of the mystery and find whether the hound heard baying on the moors is a supernatural agency or a more mundane plot to murder Sir Henry.

The Hound of the Baskervilles was one of the early Hammer films, made not long after the successes of The Curse of Frankenstein (1957) and Dracula/The Horror of Dracula (1958), which had propelled Hammer into a major horror-producing studio. The Hound of the Baskervilles assembles much of the talent that was the core of Hammer’s early successes – director Terence Fisher, stars Peter Cushing and Christopher Lee, producer Anthony Hinds, cinematographer Jack Asher, musician James Bernard, production designer Bernard Robinson and Roy Ashton on makeup.

The film is generally faithful to the Conan Doyle story – certainly, it adheres a good deal closer to the original story than either of Hammer’s Frankenstein and Dracula adaptations do to their respective sources. However, there are a number of distinct changes that seem to have been made to twist the story into a more characteristic Terence Fisher film. Notedly, this is the only known adaptation of The Hound of the Baskervilles that explores the details of the Baskerville curse, with Fisher adding a ten minute prologue that adds a Hellfire Club element to the story, showing Sir Hugo pursuing a peasant girl (Judi Moyens) through the bogs with his hounds and stabbing her. A recurrent theme of Terence Fisher’s Hammer films – see The Curse of Frankenstein, The Horror of Dracula, Dracula – Prince of Darkness (1966) – is his fascination with the patina of civility that the aristocracy and polite society maintains and the carnality and savagery that exists not far beneath the surface (an element that cannot be said to exist in the Conan Doyle version of the story).

One element of the Conan Doyle story that is dispensed with is where Holmes goes in disguise and lives out on the moors. It is a sensible decision to remove this as it is always one bugbear about any film adaptation of The Hound of the Baskervilles – that it keeps the central character of Holmes off-screen for a good part of the story. Although doing so leaves some ungainly gaps – like how Holmes still sends Dr Watson in advance, leaving the reasons for his absence vague.

The most distinctive change is the ending [PLOT SPOILERS] where the villain now becomes Cecile rather than Stapleton. Cecile was a minor character in the book and has become the equivalent of Stapleton’s wife Beryl (although is made into his sister here in order to add a romantic element with Christopher Lee’s Sir Henry). It is revealed that she is seeking revenge against the Baskerville lineage for the rape and murder of her ancestor. In doing so, she becomes yet another version of Hammer’s vision of the feminine monstrous, someone who swings between the extremes of being either beautiful and seductive or deadly.

The Hound of the Baskervilles is a magnificent production with Hammer giving it the full force of the opulence they afforded their early films. It is a considerable joy seeing the rich, brimming production values of early Hammer brought to bear in creating Baker Street and Baskerville Hall, in the lavishness of the costumes and particularly the superb mix of colours. This is possibly one of the most luxurious of all Sherlock Holmes films. The colour restoration in the dvd release makes one want to sing out. The moors come emphasised in browns and greys so that when it comes to the scene where Marla Landi is pursued while wearing a red and blue dress, the effect is utterly vibrant. Almost every other Hammer film remains stagebound but this is one of the few that go out of doors, where Terence Fisher and cinematographer Jack Asher create a landscape of brooding mist, sinister mires and bared horizons and then with striking effect show them lit up with lights at night or with figures standing on the hillside. Surprisingly, the one thing that Terence Fisher does not do is make The Hound of the Baskervilles into more of a horror movie. The hound only appears at the end – although when it does it is certainly an evil looking creation, yet it makes far fewer appearances that in almost any other adaptation of the story.

Peter Cushing’s Sherlock Holmes is a variable affair. Cushing gives us some of Holmes’s sharp brilliance, although his essayal of the role is a little colourless up against the two definitive screen Holmes portrayals – the fierce intelligence of Basil Rathbone in the 20th Century Fox/Universal films of the 1940s and the mercurial and charismatic brilliance of Jeremy Brett in Granada’s various The Adventures – , The Casebook – and The Return of Sherlock Holmes tv series between 1984 and 1994. Cushing has clearly modelled his performance on Basil Rathbone but where he should be projecting fierce intelligence, he tends to come across as too mellow. What we end up with is Peter Cushing the calm, mild-mannered gentleman with occasional manic bursts as he seizes upon vital clues.

On the other hand, it is difficult watching Christopher Lee playing the role of the relatively milquetoast and non-threatening Sir Henry and view the role without the baggage of the sinister magnetism that Lee brought to just about every other performance he gave in a Hammer film and not keep thinking he is up to something. Andre Morell is perfectly cast as the jolly old duffer of a Watson.