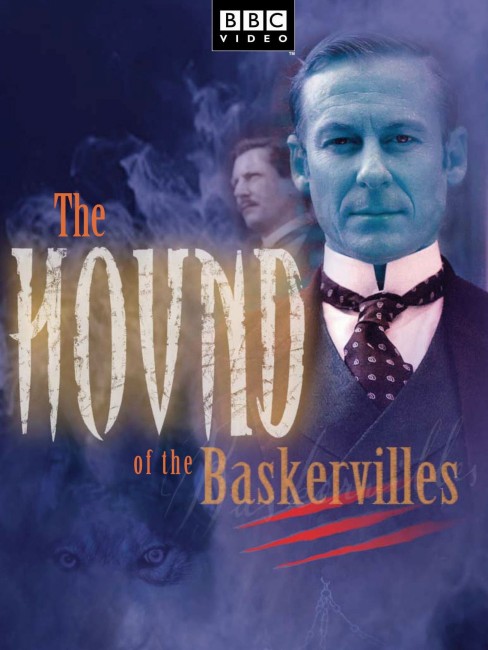 Even though it is based on a story that has become overly familiar through various other film versions, this BBC adaptation still holds a number of surprises. Allan Cubitt’s teleplay plays all the usual twists with considerable suspense. Cubitt also dramatically widens the story considerably – the film opens with the escape of the convict Selden through the moors and we see other scenes that usually take place offstage like the attack on Sherlock Holmes during his investigation of the coach.

Cubitt also brings out many aspects that other adaptations do not such as Beryl’s warnings and Holmes’s pursuit of the mysterious bearded man in the hansom cab who gives his name as Sherlock Holmes. We even see Holmes casually shooting up cocaine within the first few minutes. There is also the addition of a seance scene, which is interrupted with a considerable jolt as the hound slams up against the window. The hound is made to seem unearthly and its appearances are directed with an undeniable ferocity.

There have certainly been a number of changes made to the story. The big mid-story twist revelation about Holmes being in disguise on the moor all along has been dropped – he is merely lurking hidden. The adaptation also eliminates some of the minor characters from the book such as the litigious crank Frankland and his daughter Laura Lyons, as well as Beryl Stapleton’s Costa Rican origin.

The biggest change is to bring Stapleton out of the shadows at about the three-quarter mark rather than at the end and to then to build him up into a super-villain – as Holmes says at one point: “We have never had a foe more worthy of our steel.” As Stapleton, Richard E. Grant plays with a calculating intelligence and cold-blooded danger, especially in the scenes where we see him toying with Neve McIntosh. On the other hand, the film’s failing is that The Hound of the Baskervilles is not the sort of story that is suited to a Moriarty-like super-villain and Richard E. Grant’s Stapleton never gets the time on screen that one feels he should considering what the role has been inflated into.

One of the most interesting aspects of the film is the casting and reconceptualisation of the central roles of Sherlock Holmes and Dr Watson. As Holmes, there is the excellent Australian actor Richard Roxburgh who came to prominence as the villainous Duke in the hit Moulin Rouge (2001). Roxburgh seems determined to stamp the role of Sherlock Holmes as his own, playing the part with a mellifluous booming voice as though he were still performing in theatre and having to project to the back of the audience.

Even more radical is the film’s presentation of Dr Watson. Dr Watson is a role that is usually cast with an actor in their fifties, whereas here Ian Hart is age 38 (which is possibly, with the exception of Young Sherlock Holmes (1985), the youngest age that Watson has ever been played on screen, at least up until the casting of the 37 year-old Jude Law as Watson in Sherlock Holmes (2009), which similarly revised the Holmes-Watson relationship). Ian Hart plays Watson with a peppery crossness and forthright imperturbability. The film also puts a spin on the relationship between the two, which is traditionally characterised as their being the best of friends. At the climax of the film, Watson stands up against Holmes in an outburst of anger and in the very last line tells Holmes that he does not trust him. As Sir Henry, Matt Day, another Australian expatriate, plays with a dashingly boyish handsomeness.

Like the previous best version of the story, Hammer’s The Hound of the Baskervilles (1959), this version makes much of the period detail. Although, where Hammer’s version was rich in setting and colour, this version plays everything the opposite way for an austere and darkly gloomy realism. The moors (actually the Isle of Man rather than Dartmoor) are shot with a sense of dismal, weather-beaten inhospitability. The film also makes scrupulous effort to litter the background with period detail – including the Victorian era’s fads for naturalism, spirituality and amateur archaeology, with Stapleton even shown to be a phrenologist at one point. This feels as though it is the first Sherlock Holmes adaptation to be taking place in a period setting rather than a series of cosy Victorian drawing room sets. The result is one of the best Sherlock Holmes screen adaptations to date and arguably the best of all screen versions of The Hound of the Baskervilles that we have.

(Nominee for Best Actor (Richard Roxburgh) at this site’s Best of 2002 Awards).