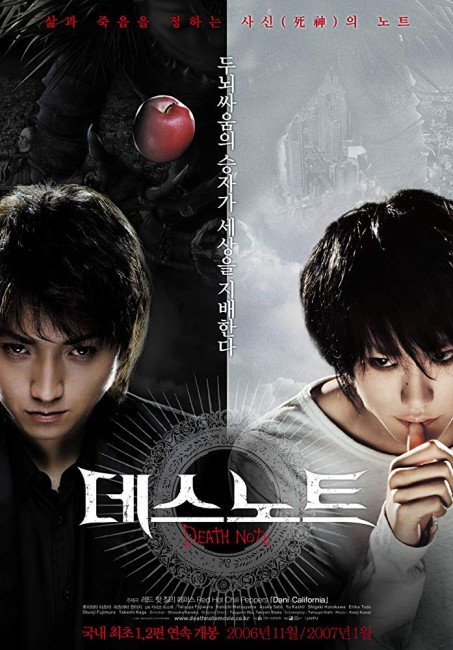 Across Japan, a mystery figure known only as Kira has the ability to cause people anywhere to suddenly have heart-attacks and die. Kira’s victims are always criminals who are guilty but have managed to slip through the system. Many regard Kira as a hero. The police try to find Kira’s identity but have no clues. In actuality, Kira is Light Yagami, the student son of the lead detective on the Kira investigation. One day, Light found a book entitled Death Note and discovered that if he wrote anybody’s full name in it they would die of a heart-attack, or by whatever means he described, within moments. Light was visited by the death god Ryuk who had originally dropped the book who then became Light’s constant companion invisible to all others. The police are contacted by the brilliant detective known only as L, who keeps his identity hidden. L has an uncanny ability to predict each of Light’s moves. By tapping into his father’s computer, Light is able to work out what the police are doing and keep ahead of the investigation. Now, Light must find ways of outwitting the increasingly ingenious traps that L lays for him.

Death Note is based on a popular manga that appeared in weekly comic-book Shonen Jump between 2003 and 2006, and was later collected in a twelve-volume series. The manga was then adapted into two movies, Death Note here and Death Note: The Last Name (2006), which came out three months later the same year. There was also an anime series Death Note (2006-7), which lasted for 39 episodes. The popularity of the Death Note phenomenon has also resulted in a stand-alone film L: Change the World (2008), which concerns L’s activities subsequent to the films; Death Note (2015), an eleven-episode tv mini-series remake of the manga, a further film Death Note: Light Up the New World (2016); and the English-language remake Death Note (2017).

Death Note was made by Shusuke Kaneko, a Japanese director who emerged with enormous promise during the late 1990s with his revision of the Gamera series in Gamera, The Guardian of the Universe (1995), Gamera 2: Assault of Legion (1996) and Gamera 3: Revenge of Iris (1999), and other impressive effects-driven films such as Cross Fire/Pyrokinesis (2000) and Toho’s Godzilla Mothra and King Ghidorah: Giant Monsters All-Out Attack (2001). Kaneko’s star dipped below the horizon somewhat in the 00s with films that never quite held the same promise as these earlier works such as the fantasy musical Toast of Love (2002) and Azumi 2: Death or Love (2005). Happily, Shusuke Kaneko returns to form with the Death Note films, although he subsequently abandoned genre filmmaking for several years up until Danger Dolls (2014) about a girl action team and the time travel comedy Linking Love (2017).

In terms of its premise, Death Note feels like another riff on Ring (1998) and sequels – a curse is launched that causes people to die within a prescribed time period – crossbred with the Stephen King short story Typewriter of the Gods (1983), which was filmed as an episode of Tales from the Darkside (1983-6), about a man who discovers a word processor that can re-edit and delete reality.

I must admit I started watching Death Note thinking that the film had a limited premise – teenager finds if he writes people’s name in a book that then they die of a heart-attack. As the film sets in, no attempt is made to spice the deaths up – we go through one death after another and Shusuke Kaneko lacks interest in varying the methods in any way. If this were an American film, it would surely concentrate the story on a conveyor belt of novelty deaths a la Final Destination (2000) and sequels.

The film starts to kick in when we get to the introduction of the character of L. The battle of wits between Light and L is what makes the film. This is not something that gains its full flight until one comes to the sequel Death Note: The Last Name, nevertheless what we have here is still highly amusing. When we finally get to meet L about halfway through, Kenichi Matsuyama gives a supremely weird performance, hunched over and socially withdrawn, eating strange combinations of confectionery and desserts every time we see him and yet also capable of dazzling bursts of elucidation and (rather amusingly) always managing to outguess every single one of Tatsuya Fujimura’s attempts to outwit him. One of the more interesting things about Death Note is that, though Kenichi Matsuyama’s Light is killing people right and left, the film, at least up until the end, never casts him outrightly as a villain or a hero.

Certainly, Death Note is different to other J-horror films – Shusuke Kaneko has no interest in scaring people or creating a mood of unearthly uncanniness, rather his focus throughout seems to be an equal mix of Machiavellian suspense turnings and humour. As horror, Death Note is low key. What is also noticeable about Death Note is that Shusuke Kaneko has wound back on the dazzling special effects that marked all of his films from the Gamera series through to his Godzilla entry. In these, Kaneko announced himself as possibly the finest special effects director working in modern Japanese fantastic cinema – his work on the Gamera series in particular ended up redefining the barrier for effects work on the kaiju eiga; Death Note is relatively restrained in this regard and not at all reliant on effects (while his films after the Death Note series have abandoned fantastic material and special effects altogether). The single exception is the digitally created character of the death god Ryuk.

(Nominee for Best Supporting Actor (Kenichi Matsumaya) at this site’s Best of 2006 Awards).