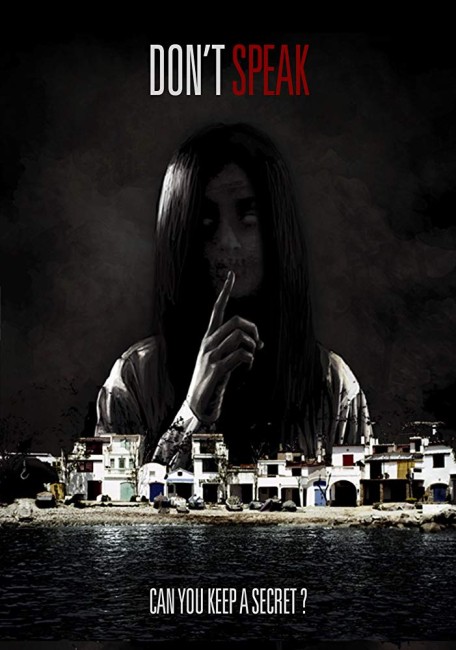 Steve has borrowed his father’s boat to go out partying with his sister Sophie and five other friends. In the midst of the party, Steve badly cuts his foot. The others decide the best idea would be to moor at a nearby island and seek medical help in the village. Once ashore they find the island strangely deserted. They encounter only a handful of people who urge them not to speak or make a sound. As the search the island, various of the party disappear. They learn the story of the man in the big house who was mobbed by the villagers for believing he killed his children who has returned from the grave to kill every person on the island.

It took me a long time to get into Don’t Speak and I can’t say I ever did. The film pitches itself as a horror film with teen protagonists. It tries to appear as though it is an American production to better sell itself. However, it has been filmed with a non-American (Spanish) cast. As a result, things feel off particularly when the actors open their mouths and start speaking a form of American that nobody from the US would ever recognise. None of the characters are particularly likeable into the bargain – some of them seem so self-absorbed and complainy that you sit waiting for them to be killed off. Moreover, many of them often seem amateurs – Sara Gil’s performance being one notable example.

The film does have the benefit of an interesting location – Cala s’Alguer, a small town on the Costa Brava, about seventy miles northeast of Barcelona. The town is built around a bay and has a series of unique individually coloured houses that makes for a very different looking locale. (It unfortunately looks nothing at all like any location in the USA. Nor is Cala s’Alguer an island despite what the film wants to convince us). The downside is that the town looks more like the promenade for a set of beach houses and, although the cast go running around the wooded area nearby and indoors at various points, it is only the frontispiece that looks unique.

The huge disappointment of the film is that despite a catchy premise of people not being able to speak, the film never uses this gimmick in any way. People are urged not to speak lest they be killed however the film never gives us any scenes where people are actually killed for speaking or even where their speaking creates a sense of danger as you would kind of expect given the premise. The menace that is killing people is not even very well established as a threat. One also must say that director Amadeu Artasona’s set ups are not very well staged. The film does arrive at a hardly interesting or very well explained mundane ending where we find that what went on was due to the murder of the landowner’s child and a further twist is then placed on this.