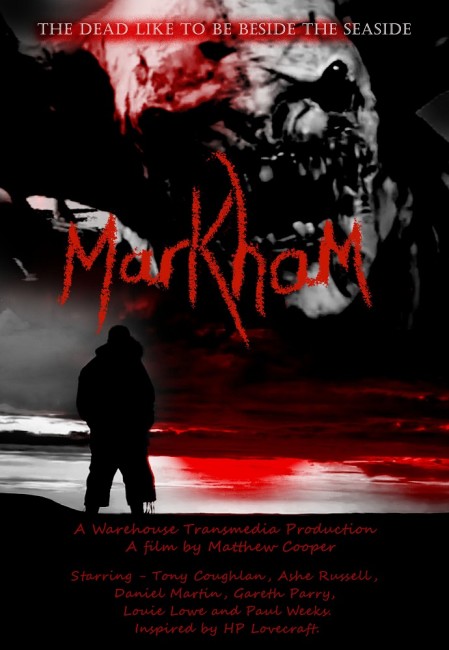 Jack is hired by the film director Rob who wants him to go to the town of Markham and shoot some reality-based horror footage for a Russian backer. Jack heads to Markham, near Whitby in the north of England, and finds it to be a strange town. Unknown to Jack, Rob is secretly filming using actors he has set up to interact with him.

Markham was a feature-length debut for British director Matthew Cooper. Cooper had previously made several short films and worked as a scriptwriter on popular UK tv shows like Emmerdale Farm (1972- ), Eastenders (1985- ) and Hollyoaks (1995- ).

With Markham, Matthew Cooper makes an H.P. Lovecraft film. Lovecraft was an author writing in the 1920s and 30s whose work broods with a sense of cosmic horror, of scientists uncovering forbidden knowledge, elder gods slumbering and awaiting to be released and the like. (For greater detail see Lovecraftian Films). Although other reviewers have made the assumption that Markham is based on an existing Lovecraft story, this is not the case and it only draws on Lovecraft in a generalised sense. Matthew Cooper has announced plans to make several other Lovecraft films.

Matthew Cooper shot the film in Whitby, Yorkshire, whose greatest claim to fame is that it is the location where Bram Stoker’s Dracula (1897) takes place. Markham comes with some of the most stunning black-and-white photography I have seen in any film in some time. Cooper (who conducts the photography himself) creates beautiful shots of the roads, skies, churches, of figures crossing bare and empty fields, and the town itself (which becomes something quite sinister under the b/w lighting). There is one breathtaking shot of the clouds above the town lit up by flashes of seemingly eldritch lightning that you leaves you not sure whether it is an actual shot or one created by effects.

On the other hand, Markham is all mood and … well nothing else. Exactly what is going on is utterly confusing. Thomas Cody is given the assignment by director Ashe Russell to go to Markham (in fact Whitby) and get some Candid Camera-style horror reactions for a never-seen Russian backer. It then confusingly appears that rather than actually shooting any footage that Russell has hired an actor (Tony Coughlan) to give dire warnings to Cody and is secretly filming him. The film takes on a weirdly meta-fictional level – sections of the script even come overlaid on the screen describing what is happening at one point. 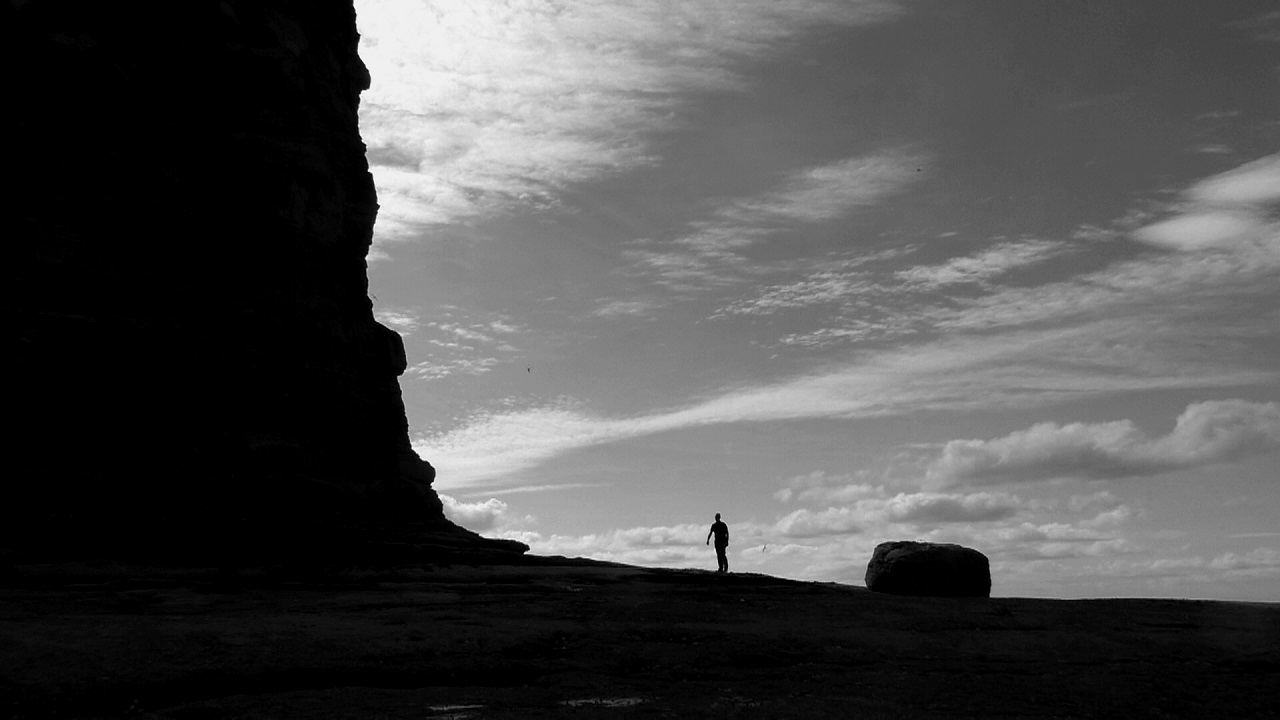 There are assorted scenes where Thomas Cody wanders around the town and in voiceover quite effectively contrasts Whitby past and present (represented by stock footage of the town in its heyday) with usual Lovecraftian portentous dialogue. There are some scenes where Russell has spiked Thomas Cody’s teabags with hallucinogens and he experiences a trip, including a rowdy mob of people (that we never see) outside his hotel room. The latter sections of the film fragment off with Cody running amok, killing various locals and the film crew, then stabbing Ashe Russell and assuming directorial control of the film. The opening credits come overlaid with a bunch of contemporary buzzwords like Covid-19, Fake News, Epstein, Russian Interference, and tell us “We are watching you watch this film,” which makes it sound like a mad YouTube conspiracy video even though these have no relevance to the film that follows.

This is one of the most frustrating and incoherent films I have seen in some time. It seems to be a film that operates without any kind of plot, just the never-too-clear one about Thomas Cody being set up by a filmmaker. This also seems far removed from H.P. Lovecraft. What the film lacks is any of the essence of Lovecraft – the plot set-up leaves you with the expectation of something akin to The Shadow Over Innsmouth (1931) where the narrator discovers the locals are involved in miscegenation with fish people. The only Lovecraftian element we get is a visit to a dolmen that is referred to as ancient artefact; a really crappy optical of a fish person that attacks two crew members in the opening scene; and an even worse effect of a two-headed snake that is supposed to represent the appearance of Cthulhu at the end.

(Winner for Best Cinematography at this site’s Best of 2020 Awards).