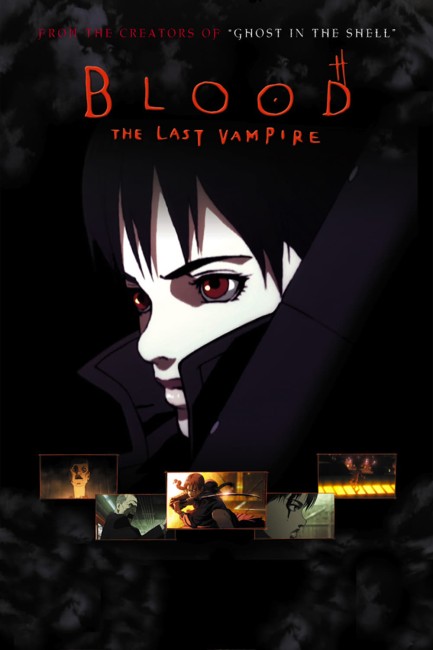 Japan, 1956. The vampire Saya is employed by a covert American force that is dedicated to wiping out demons. She is sent undercover as a pupil to the school at the Yokota American military base. There she exposes two demons posing as schoolgirls. As the fight to kill the demons escalates into bloody violence, an innocent school nurse is drawn into the conflict.

It is not the general policy of this site to review short films (films under one hour in length). One exception should be made for Blood: The Last Vampire. Firstly, because it has been released on video as though it were a feature-length film, even though it is only 45 minutes in length. (It is combined with a ‘making of’ featurette, which is nearly as long as the film, to pad the running time out, but this is a cheat). Secondly so, because it is an anime of exceptional artistry.

The basic concept of Blood: The Last Vampire falls somewhere between a traditional demon war anime such as Wicked City (1987) and Legend of the Overfiend (1989) and the stylised swordplay of Highlander (1986) and the dense hyperreal detail of a modern reworking of a film noir. It reminds of the then recent anime Jin-Roh: The Wolf Brigade (1998), which also came from the same production company Production I.G. and was scripted by Blood: The Last Vampire‘s executive producer Mamoru Oshii, the director of Ghost in the Shell (1995) and Avalon (2001). Both Blood: The Last Vampire and Jin-Roh feature a similar post-War Japan as setting and concern an organised covert taskforce hunting supernatural monsters. Both films are also stylistically similar in their focus on banal and rundown everyday backgrounds of the post-War period. That said, Blood: The Last Vampire works better as a story than Jin-Roh did.

The quality of animation is stunning – especially in the fact that such artistry has been placed into a non-commercial format such as the short feature. When the bomber comes over the screen to land at the airbase early on, one not only sees it move in breathtaking 3D detail but also hears the full effect of it on the stereo soundtrack. There is a stunning opening sequence, cut in between the credits, set in a railway station. The film drinks in the slow minutiae of detail of the station and as the train starts moving, before exploding out into action in a dazzling pullback down the length of the carriage as the heroine comes after and kills a creature amid the strobing flashes of half-light.

The film draws a striking bleakness and lack of sentimentality out of its characters. Particularly good is the character of the unnamed Japanese schoolteacher who is drawn into the action as an innocent bystander – her uncomprehending fear has immense conviction. The short climaxes on a stunning action sequence with the heroine and schoolteacher trapped in a burning airplane hangar, with the heroine fighting off the demons with a spade as they break in through the skylight, the near-catatonic teacher going to shoot herself, the dazzling image of the demon unfurling its wings and flying off from the roof of the hangar, and the heroine racing aboard a Jeep as the demon attempts to flee by catching onto the wing of a bomber as it takes off.

Blood: The Last Vampire is a film that one almost wishes was a feature-length film. Certainly, the plot is underdeveloped – one wishes more time had been spent fleshing out who the heroine is, how she came to be the last vampire of the title (which is never actually referred to or explained in the film itself), her relationship with the American secret service and in explaining what the demonic forces are. The film is notedly made with a political edge – being set around the US military occupation of Japan immediately post-World War II. It is cautiously questioning of this, although the fact that the heroine works for a covert US military agency does tend to muddy the message.

It is also hard to know what to make of the final image on the planes taking off to start the Vietnam War – are we meant to find a correlation between the war with the demons and US foreign policy in Southeast Asia in the coming decade? It is not clear what this Vietnam War coda represents on a symbolic level. It is a political point that seems akin to Edward D. Wood Jr’s ending Bride of the Monster (1955) on an atomic bomb blast unrelated to anything else just because his backer wanted to make a message. The film is also peculiarly bilingual, with the characters voices vying between both Japanese and English.

The film was later given a feature-length live-action English-language remake Blood: The Last Vampire (2009).

Director Hiroyuki Kitakubo had previously directed the A Tale of Two Robots Chapter 3: Foreign Invasion episode of the anime anthology Robot Carnival (1987) and made his feature-length debut as Katsuhiro Otomo’s replacement on Roujin Z (1991).