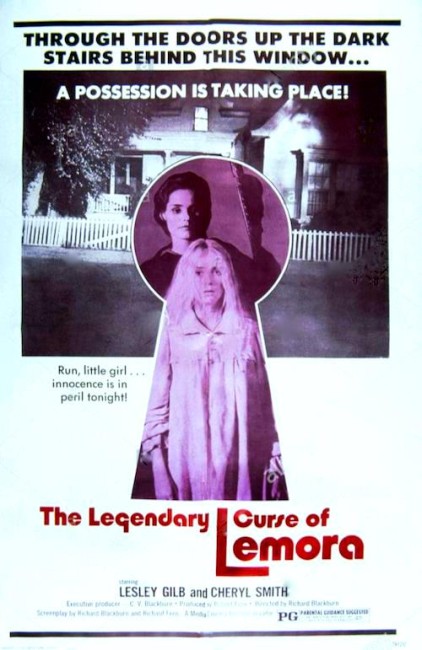 aka The Legendary Curse of Lemora; Lemora the Lady Dracula

Lila Lee is innocent daughter of the gangster Alvin Lee. Lila receives a note from Lemora, asking her to come in secret to meet her father. Lila catches a bus to a remote town in the countryside. Along the way, zombie creatures attack the bus and devour the driver. Lila comes around in the home of Lemora. Lemora tends and befriends Lila, but Lila comes to see that Lemora is a vampire and is planning to seduce her and drink her blood.

Lemora: A Child’s Tale of the Supernatural is an obscure effort from the 1970s that didn’t get much notice when it initially came out but has since gained a minor cult reputation. Things are confused by the fact that the film exists under several different titles, as well as several different cuts that have variously removed and restored sexual content – the original theatrical release ran to 80 minutes, the dvd release in 2004 restored this to 85 minutes but the uncut version is reputed to run to 133 minutes, which means there is nearly a half-hour of the film that remains unseen by the general public.

Lemora has an undeniably haunted atmosphere at times. Director Richard Blackburn creates something uncanny during Cheryl Smith’s journey with she being the only person aboard the antiquated bus, the filthy driver (Hy Pyke) giving her warnings about where she is travelling to, and an almost hallucinatory scene where zombie-like creatures suddenly come running out of the woods as the bus passes. The driver is then forced to stop and change the tire whereupon he is attacked by the zombies, which start to smash in through the windows as Cheryl Smith manages to get the bus into gear and freewheel it down to the bottom of the hill, only to crash into a tree. Richard Blackburn has clearly drawn more than a touch or two of inspiration from the then-recent cult hit of Night of the Living Dead (1968) during these scenes.

On the minus side, when we arrive at Lemora’s place, the pace of the film slows down. There is nothing subsequently that has the same dream-like hallucinatoriness of the scenes with the attack on the bus. A good deal of the latter part of the film involves lots of skulking around various sheds, buildings and woods in the dark. However, not much happens during these scenes.

Lemora clearly falls into the 1970s fad for lesbian vampire films that came out following the success of Hammer’s Karnstein trilogy – The Vampire Lovers (1970), Lust for a Vampire (1971) and Twins of Evil (1971). There were a spate of European spinoffs from these with the likes of Vampyros Lesbos (1970), Daughters of Darkness (1971) and The Blood-Spattered Bride (1972). Lemora offers a uniquely different approach to these others. In most of the films, the vampire is a voluptuous or socially sophisticated woman who is intent on seducing (and also occasionally drinking the blood) of other young women or frustrated wives.

At quite different contrast, Lemora is cast as a gloomy Gothic woman who occasionally shows some sophisticated allure, but also seems to enjoy living in a decaying Southern antebellum mansion. Into the midst of this comes Lila who is of shining purity and virtuousness – she is even introduced singing solo in the church choir. This is something that serves to plunge the lesbian vampire into a Southern Baptist dialectic (even if the film was shot in California) where the battle is one between Christian virtue and the festering shadows of The South. The film does reach an interesting point at the end where it suggest that we have been completely wrong in seeing Lila as an innocent Christian girl and that she has in fact been seducing all around her, although this aspect is not explored any more than that.

On the minus side, the version of the film seen here appears to have had much of the lesbian seduction cut from it. All there seems to be is a scene where Lesley Gilb helps Cheryl Smith have a bath, where there seems to be something seductive going on beneath the seemingly innocent words that Gilb says. Indeed, much of the film operates on a dual level where Richard Blackburn shoots what is happening in an indirect way without quite coming out and saying anything and where what is happening is only ever suggested.

Nobody involved ever seem to go onto do much again. Director/writer Richard Blackburn went onto co-write Paul Bartel’s Eating Raoul (1982) but nothing other than directing an episode of Tales from the Darkside (1983-6) and animation voice work. Lead actress Cheryl Smith, aka Rainbeaux Smith, appeared in small parts in a handful of exploitation films, including Caged Heat (1974), The Phantom of the Paradise (1974), Massacre at Central High (1976), The Incredible Melting Man (1977) and Laserblast (1978), was Cinderella in the adult Cinderella (1977), and lead singer with the girl band The Runaways, before her death of a heroin overdose in 2002.