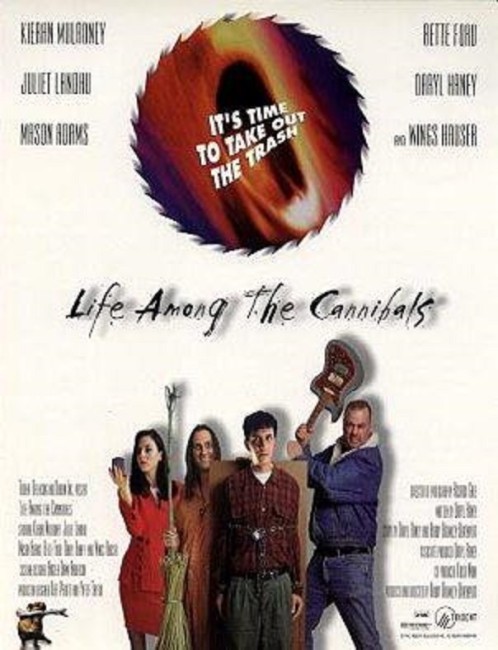 Jasper James has come to Los Angeles to pursue a career as a musician. In the meantime, he is working as an assistant to former tv star Vince Vincent, who has become an alcoholic after an accident dislodged the plastic surgery on his chin. When Jasper criticises the meal his girlfriend Rachel makes for him as being slightly overcooked, she turns psychotic. Jasper moves out and rents a large old house he finds going cheaply. After moving in, he comes to believe that his strange neighbour Troy may be killing people. He breaks into Troy’s house in search of evidence. However, when he finds a videotape of Troy torturing and dismembering a bruiser that Rachel sent to beat him up, Jasper decides to keep quiet. After Rachel humiliates him on a tv show, Jasper then makes plans to manipulate Troy into eliminating her.

Life Among the Cannibals sits halfway between extremes. It is sort of a wannabe Coen Brothers film – maybe the Coens channelling The ‘Burbs (1989)? – but made without any of the Coen’s skill and dark, minatory bite. It is more a Coen Brothers film as though made by a hack like Jim Wynorski or Fred Olen Ray.

The film has a pitch of surreal, black comedic bizarreness – the psychotic ex-girlfriend (Juliet Landau): the alcoholic ex-tv action star (Wings Hauser) with a botched plastic surgery problem; the threatening cops who insist on coming to visit Kieran Mulroney but then prove friendly and join in a poker game; the eccentric aging landlords . Howeer, presented without much skill, this dissolves into less a tone of menacing cruelty than it does raucous farce. There is certainly the initial weirdness that there is to any good indie black comedy – the feeling that one has no idea what is going to happen from one moment to the next – but Bromley-Davenport’s unsubtle tone soon tires. Juliet Landau (Martin Landau’s daughter) gives a very over-the-top performance. It should be noted that, despite the title, there are no cannibals in the film.

Director/producer Harry Bromley Davenport has also made Xtro (1982), Xtro II: The Second Encounter (1991) and Xtro 3: Watch the Skies (1993), although none of these have anything to do with each other. Bromley Davenport has made a handful of other films, including the children’s film Waking Up Horton/The Adventures of Young Brave (1998) about the returned spirit of an Indian medicine man, Mockingbird Don’t Sing (2001), the true story of an adult woman who was treated like an animal, and the ghost story Darkness Visible/Haunted Echoes (2008).