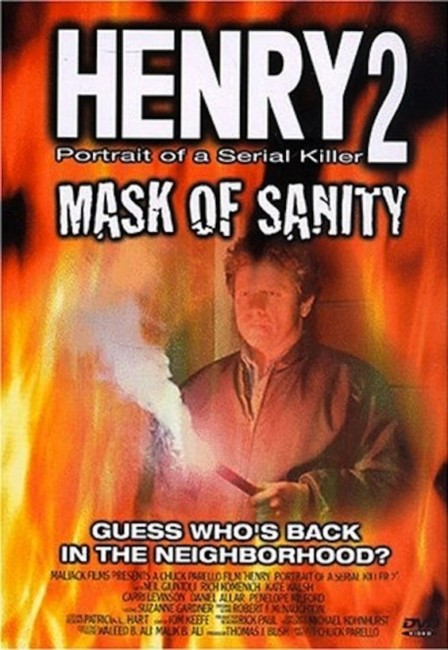 Henry is now living at a homeless shelter but then obtains a job with a portable toilet company. Henry’s co-worker Kai offers for him to come and stay in the spare room at his place, along with Kai’s wife Cricket and Cricket’s socially awkward niece Louisa. Henry discovers that Kai is running an operation where he burns down buildings so that the owners can obtain insurance money. Kai invites Henry to help him. On one operation, they find two runaway youths in a building they are going to torch and Henry cold-bloodedly kills them both. Henry then starts to draw Kai into his enjoyment of casual murder in which Kai proves a willing partner.

Henry: Portrait of a Serial Killer Part II was greeted with a host of scathing reviews when it came out. Chuck Parello tries to approximate John McNaughton’s raw violence but fails to come anywhere near the disturbing quality that the original held. In the first few minutes, Parello throws in a rape scene between two guys in a homeless shelter but this, while it feels like it should have shock value, is not convincingly presented and seems forced in the attempt to shock us. Other scenes like the confrontation between Rick Komenich and his neighbours seems far too banal – as opposed to the rawness with which John McNaughton would have directed the scene, Chuck Parello’s handling seems far too composed, consisting merely of measured reaction shots between the actors.

The film does pick up somewhat with the introduction of the torch element. Here Parello starts to take Henry into an interestingly new direction. And to be fair to Chuck Parello, there is the odd scene that does seem to touch upon something of John McNaughton’s Henry – like the snapping of the squeegee derelict’s neck, which has a moderate brutality, although still lacks the rawness and blankness of the original. During the latter half when the character tensions emerge, the film at least settles in with some passable effect. On its own, Henry: Portrait of a Serial Killer Part II might have been an okay film but as a follow-up to Henry: Portrait of a Serial Killer it comes as a big disappointment.

A large part of the Henry Part II‘s failure comes in Chuck Parello having recast the title role with Neil Giuntoli. In Neil Giuntoli’s Henry, there is little of the sullen and brooding violence that came in Michael Rooker’s performance in the original. There are a couple of moments where Giuntoli manages some of the grim monologues that Rooker did so memorably. Mostly though, the surprisingly short Giuntoli comes across as far too cleancut. He is more like a college kid who at most seems unhappy about life than the dangerously violent killer that we saw in Michael Rooker’s performance.

With the pairing of Neil Giuntoli and Rick Komenich, Chuck Parello tries to replicate the relationship between Henry and Otis in the original. However, the two actors have a different dynamic, Rick Kommenich being a much stronger personality than Tom Towles’ Otis. Tracy Arnold’s Becky has been replaced by two different women – the much more assured Kate Walsh as Rick Komenich’s wife and Carri Levinson as the shy, socially introverted Louisa who becomes fixated on Henry and unbalanced after he rejects her. Both Rick Komenich and Kate Walsh, later a regular on Grey’s Anatomy (2005– ) and the lead in its spinoff Private Practice (2007-13), give strong performances.

It is also interesting to contrast the social backdrops of the two films. Henry was set in urban Chicago; on the other hand, Henry: Portrait of a Serial Killer Part II is set against the backdrop of small backwater towns. Henry‘s setting was an urban anonymity, Henry Part II‘s setting is of American blue collar nowhere towns where homelessness is rife and where the working grit their teeth in unpitying labouring jobs and the major pastime seems to be drinking beer. The start of the film sees Henry in a homeless shelter, while much of his violence seems to target the homeless and urban underclass – kids squatting in empty buildings, squeegee derelicts. Here Henry: Portrait of a Serial Killer Part II seems to suggest something of the socially dissolute Nowheresville USA world of River’s Edge (1986) where violence seemed a reaction against a hopeless future. Chuck Parello seems to be making the comment that outside the borderlines of middle-class society, the psychological norms that the rest of America operate by have broken down and the world of the disenfranchised is the perfect hunting ground for someone like Henry.

Chuck Parello would later go onto direct two films based on the lives of real world serial killers with the banal Ed Gein (2000) and the excellent The Hillside Strangler (2004).