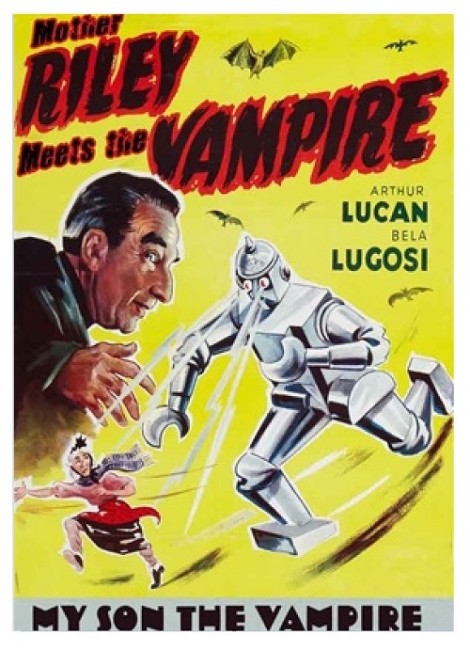 British police are searching for Van Housen, a criminal who likes to call himself The Vampire and insists that he is the incarnation of an infamous blood-drinking ancestor. The Vampire is believed responsible the abduction of a number of women, his most recent victim being Julia Loretti, the daughter of the owner of a South American uranium mine. Van Housen wants to conquer the world with an army of robots. He has Mark 1, the prototype of his robot, delivered to his country mansion. However, this gets mixed up with a delivery being made to London shopkeeper Mrs Riley. After realising the mistake, Van Housen remotely activates the robot and orders it to bring Mrs Riley to him. With she not understanding what is going on, Van Housen persuades Mrs Riley to stay on at the mansion as his cleaning lady. There she inadvertently stumbles into the midst of Van Housen’s plans to obtain the location of the uranium mine from Julia.

Mother Riley Meets the Vampire rapidly becomes a British equivalent of one of the Old Dark House comedies that were made by the Bowery Boys/East End Kids and others in Hollywood in the 1940s. These were essentially lowbrow knockabout comedies set around an old mansion. Several of these East Side Kids comedies also featured Bela Lugosi as a sinister figure – see the likes of Spooks Run Wild (1941) and Ghosts on the Loose (1943). Here Lugosi has been imported to England and is essentially typecast as himself. When we are first introduced to him, Lugosi gets out of a coffin – why we are never sure – and he insists on calling himself The Vampire throughout – even though his activities are otherwise mundane and non-vampiric. This is no doubt to capitalise on association with Bela Lugosi’s signature role of Dracula (1931) than something that has any place in the film’s script – indeed, without him calling himself The Vampire, the film’s title Mother Riley Meets the Vampire is meaningless.

Most of Mother Riley Meets the Vampire is pitched down at the idiotic knockabout physical clonks that were typical for the era in England – the interminable Carry On films being the apotheosis of this. It is filled with cliche figures from this type of comedy – the shrieking Cockney charwoman, the pompous upper-class twits, characters with buzzsaw-voiced Cockney accents and dim-witted coppers on the beat.

The film seems to lack any real story – it moves the action to Bela Lugosi’s country mansion/laboratory early in the show and thereafter seems at a loss of what to do and spends the rest of the time engaged in endless runnings around the house. These descend to cliche elements of the Old Dark House genre with a venture down into the cobwebbed tunnels with revolving doors, hidden panels and faces peeping out from behind the eyes of portraits. The film climaxes in a frenetic slapstick chase sequence at undercranked speeds where Arthur Lucan is outfitted with a silly vehicle for no other reason than this sort of film requires one.

Beyond all of that, the goings-on in the film make little sense. Why is Bela Lugosi’s professor abducting women? At one point, Judith Furse tells David Hurst “It is better you do not know, Mugsy. It might upset your delicate mental balance.” And appropriately enough, we never do find out – not that the rest of Mother Riley Meets the Vampire does anything to restore our delicate mental balance either. Equally, we never find out why Bela Lugosi is obsessed with drinking blood or believes that he is a vampire. Or for that matter why Lugosi wants to keep Mother Riley in his house on the pretence of hiring her as a maid. All of these things are raised and then promptly forgotten as though they don’t matter.

Director John Gilling gained a minor name for his subsequent work with Hammer and other studios during the Anglo-horror cycle but does little of any distinguishment here. John Gilling’s other genre films include:- the sf film The Gamma People (1956), the Burke and Hare film The Flesh and the Fiends/Mania (1960), the psycho-thrillers The Shadow of the Cat (1961) and Panic (1963), the alien visitor film The Night Caller (1965), the trilogy of The Plague of the Zombies (1966), The Reptile (1966) and The Mummy’s Shroud (1967) for Hammer, and The Cross of the Devil (1975). Gilling also wrote the scripts for the haunted house film House of Darkness (1947), the Burke and Hare film The Greed of William Hart (1948), the psychic thriller The Man from Yesterday (1949), the Jack the Ripper film Room to Let (1950), Hammer’s The Gorgon (1964) and the Joan Crawford turkey Trog (1970).