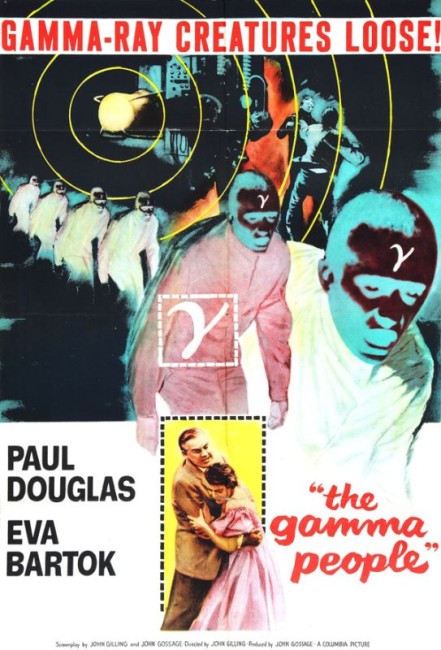 American journalist Mike Wilson and his British compatriot Howard Meade are travelling by train to cover a music festival in Stuttgart. However, their train carriage becomes uncoupled and coasts down an abandoned branchline into the Soviet republic of Gudavia. The country has cut off contact with the outside world and their arrival is a sensation among the locals. At first imprisoned, they are then made guests at the inn on the orders of Dr Boronski. They meet Boronski, a former Western biologist with radical ideas about creating a genetic master people who disappeared a few years earlier. From his castle laboratory over the town, Boronski has been conducting experiments using gamma radiation that will make children into geniuses, while the rejects from his experiments have been turned into a zombified army.

The Gamma People was one of the films from British director John Gilling (1912-84). Gilling had been making assorted thrillers since the mid-1940s, as well as writing the screenplays for other films. A few years after this, he began work in the Anglo-horror cycle of the 1960s and 70s where he is mostly remembered for two Hammer films, The Plague of the Zombies (1966) and The Reptile (1966). (See below for John Gilling’s other genre films).

I had seen The Gamma People reviewed in several science-fiction cinema guides and made a note to track it down. Seen it ends up disappointing somewhat on what one’s expectation led me to believe. The talk of using radiation to create a race of super-children makes it seem more of a science-fiction film than it is. The element is there and does push The Gamma People over into science-fiction territory but it is also a soft case to be made.

I think I was expecting something more akin to The Damned (1963), which feels like a far more confident version of what The Gamma People held the kernel of being. Here the ideas are wrapped up in what is predominantly a spy thriller. There is very little focus on the experiments, a few scenes with the children and zombie-like rejects from the experiments. However, there is never much done to make Walter Rilla’s Boronski seem like a mad scientist.

The Gamma People feels like it wants to be a Communist threat film but seems awfully tentative about doing so. Most American films of this era seem certain of the dire threat posed by Communism. The Gamma People takes place in a Soviet republic but in actuality it seems more like a forgotten town in the backwater of the German Alps. You might contrast it to other films of the era that ventured behind the Iron Curtain such as Topaz (1966) and The Chairman (1969), which were fearful of discovery and arrest, whereas this at most features a puffed-up comic police commissar, while it seems that the orders around the town are being called by the mad scientist rather than secret police or central politburo. The middle of the film often gets taken over by comic set-pieces with Paul Douglas chasing annoying kid Michael Caridia around the town to get photos and negatives back. It is a film set behind the Iron Curtain but where the Communist threat surprisingly enough seems non-existent or at best provincial in nature.

The happenings in the film are often given a more comedic focus. Paul Douglas was an American actor imported for the occasion (as was the case with several other British genre films of the era). Big beefy Douglas is not exactly a POV character that draws sympathy to him (today at least) – he seems to act before he ever listens to what is going on and makes almost no attempt to understand the culture and situation around the town.

As his British counterpart, Leslie Phillips went onto a long career that ranges from the Carry On to the Harry Potter films. Phillips makes what today seems a bizarre character – one is hesitant about engaging in sexual stereotypes but he is played with a flamboyant effeminacy that today would almost certainly mandatorily label him as gay.