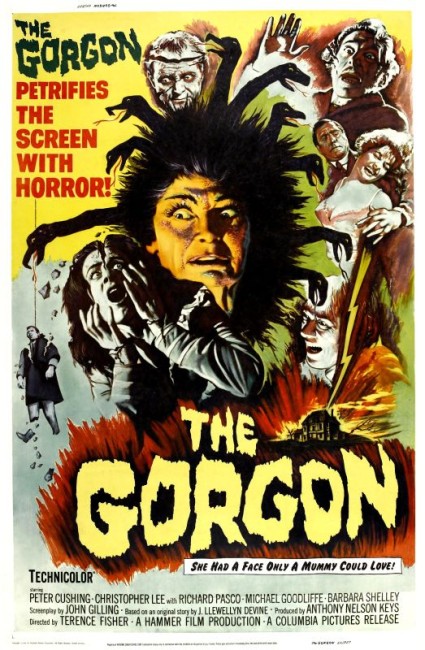 Jules Heitz, a professor of literature at Heidelberg University, arrives in the village of Vandorf to investigate the circumstances of the death of his son and his son’s girlfriend. He becomes suspicious when the local doctor Namaroff refuses to show him the bodies. In the ruined Castle Borski, Heitz discovers the living gorgon but is turned to stone by its gaze. His superior Karl Meister arrives to continue the investigation. Meister comes to believe that the gorgon has taken human form as one of the townspeople and only emerges when the moon is full.

The Gorgon is one of the most neglected and underrated of the classics from England’s Hammer Films. It was made at a time when Hammer were basking in the initial success that came with The Curse of Frankenstein (1957) and Dracula/The Horror of Dracula (1958). After remaking various other classic horror stories, they started to look for new, original avenues of horror and tried with mixed success during this period to create a new pantheon of monsters, including here trying to make a monster out of the gorgon from Greek myth.

A good deal has been put into The Gorgon. Director Terence Fisher, the lynchpin of Hammer’s success, is on top form and creates a film of unexpected beauty. The sets, particularly the leaf-strewn interiors of the castle, have a sumptuous elegance. (One may notice that Peter Cushing’s laboratory is also the one from the same year’s The Evil of Frankenstein (1964), slightly redressed). Some scenes like the appearance of the Gorgon to Richard Pasco, her unearthly face reflected in the shimmering garden pool, and as she pursues him about the garden, seen only in glimpses, have an eerie grandeur.

The most striking image in the film is one shot where Barbara Shelley appears to Richard Pasco in the castle ruins – she seen standing in a coat with a fur hood (the coat being a deliberate symbolic tipping of the hand as to her real identity) while around her a castle of Grecian splendour lies in ruins, strewn with autumnal leaves, and behind is a painted backdrop of the night sky. It is an image that appears almost as though out of a classical painting in the extraordinary beauty and richness of its colours. The climax is also effective, despite the unconvincing manifestation of the snake-headed gorgon and the even less convincing severed snake heads.

There is a well-structured script that shuffles a strong hand of surprise twists, unlike the straight line most Hammer scripts tended to go in. What also makes The Gorgon fascinating is the number of things it has going on in it beneath the surface. There is the triangle between Richard Pasco, Barbara Shelley and Peter Cushing, which is conducted with some subtlety. Even the casting of Peter Cushing and Christopher Lee is a deliberate reversal of the roles the two usually played in Hammer films – Lee this time plays the commanding straight-arrow savant and Cushing the suspicious doctor – which sets up some unusual resonances.

Many of the recurrent themes that preoccupied Hammer reappear here – particularly the battle between superstition and reason, wherein the forces of reason become the forces of repression battling an evil that threatens everyday society. Never again did Anglo-Horror conduct as potent a version of the feminine monstrous as the one they do here.