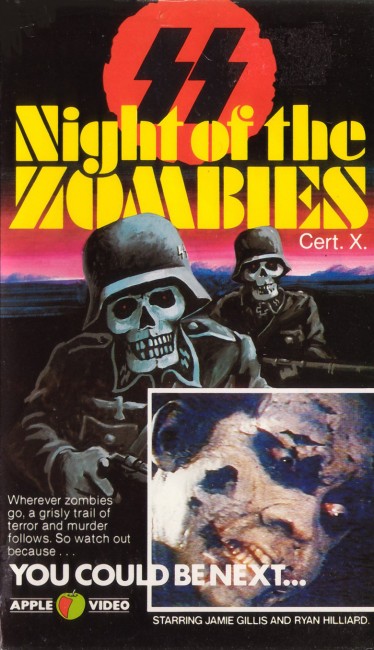 aka The Chilling; Gamma 693; Night of the Wehrmacht Zombies

CIA agent Nick Monroe is sent into the Bavarian mountains to find an expedition from the US War Graves Division that went missing while searching for evidence of a troop of American soldiers who vanished there at the end of World War II. He is accompanied by a chemical weapons expert who has been sent to locate canisters of Gamma 693, an experimental gas designed to heal the wounded, that the German soldiers were carrying. There they discover the horrible secret – that the soldiers are alive. However, due to taking the Gamma 693, they have been turned into zombies that are either dependent on more gas or having to devour human flesh to stay alive.

In the 1980s, Nazis made a comeback in zombie films. This period offered up Night of the Zombies, the quite decent Shock Waves (1977), as well as a couple of cheap European entries with Jesus Franco’s Oasis of the Zombies (1981) and Jean Rollin’s Zombies’ Lake (1981). A few years later, the Nazi zombie film was revived on substantially better budgets with Outpost (2007) and Dead Snow (2009), both of which have produced sequels, as well as War of the Dead (2011) and Bunker of the Dead (2015).

The lack of budget clearly shows up – the set for the CIA director’s office, for instance, appears to be a hotel ballroom – one can see chairs stacked up at the side of the office and the desk is simply a dining table with a cloth draped over it. The skeletons that the zombies are eventually reduced to are all anatomical skeletons borrowed from a med lab – one can see the mark where the skull is sliced open. Although the film apparently had enough of a budget to be able to afford to go on location in West Germany.

The first half of Night of the Zombies is a dull trail of spy work through the streets of Munich in a plot that is difficult to follow. Eventually the scenes with the zombies prove mildly worthwhile. There is an incongruous scene where the zombies sit down and start talking about their leave to Paris and joking about which side is meant to be killing who tonight. The revelation of who and what they are and who Proud is, plus the ambiguous ending that suggests Jamie Gillis may have become a zombie too, are reasonably well done. It is clearly an attempt to do something different with the zombie film and, as such, is an idea that almost transcends the thorough tawdriness of the material at hand.