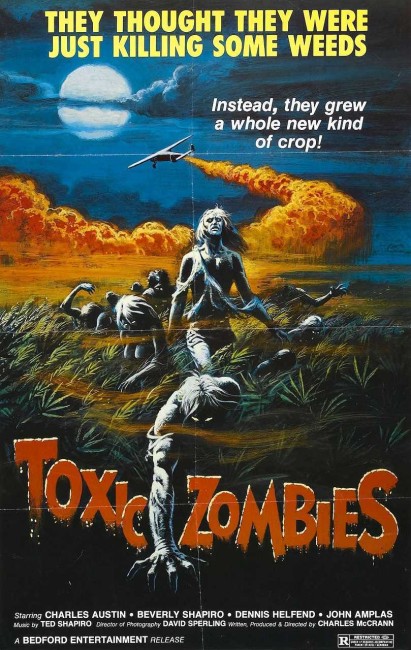 A group of hippies are harvesting a crop of marijuana they have grown in a remote area of the backwoods. They kill two FBI agents who find the site. When the agents fail to report in, their superior Agent Briggs orders the area crop-dusted with the untested herbicide Dromax. FBI field agent Tom Cole is told to stay away from the area but defies orders to go fishing nearby with his wife Polly. When the herbicide is inhaled by the hippies, it turns them into zombies. Those uninfected flee as the zombies begin attacking everybody in the area.

Bloodeaters is an obscure zombie film. The film saw sporadic theatrical release in the day and can be found in a variety of different titles, including Toxic Zombies and Forest of Fear, while nowadays copyright appears to have lapsed and it is freely available on YouTube.

Bloodeaters/Toxic Zombies was the one and only film ever directed Charles McCrann, a Princeton graduate who became a lawyer. McCrann was later the vice president of a financial services firm and was one of the victims of 9/11 attacks on the Twin Towers where his company’s offices were located. McCrann can also be seen on screen in the film under the pseudonym Charles Austin – he plays the lead role of the FBI agent who goes fishing in the area.

You get the strong impression that Charles McCrann was influenced by George Romero. Romero had created the zombie film with Night of the Living Dead (1968) and returned ten years later to follow it up Dawn of the Dead (1978), which placed a higher emphasis on gore and splatter. Dawn of the Dead in turn created a second wave of zombie films throughout the 1980s. The Romero influence becomes obvious here in that McCrann casts John Amplas as one of the FBI agents. Amplas was the Romero associate who played the title role in Romero’s Martin (1976) but more crucially was the zombie who got a screwdriver in the ear in Dawn of the Dead.

Bloodeaters/Toxic Zombies also ends up being one of the dreariest of the early 80s spate of zombie films. Charles McCrann has no real directorial style. His camera set-ups are indifferently placed. The pacing of the film is dull and everything looks cheap. Indeed, this is probably the tattiest English-language entry among the 1980s zombie boom – for a more cheap-looking zombie film you’d have to look at some of the Euro entries of the era like Oasis of the Zombies (1981) or the Italian-made films. (For an overview of the genre see Zombie Films).

The idea of hippies turned into zombies goes back to I Drink Your Blood (1971), which had hippies being fed meat pies filled with rabies, while the idea played out in the later Bong of the Dead (2011). The main problem with ‘Bloodeaters is that the zombies are never much of a threat. Their attacks are indifferently staged – the zombies only occasionally stumble out of the woods at people but McCrann never builds these scenes into anything where you feel like people are at siege or fighting for their lives. There is some occasional amateurish-looking gore but applied with nowhere near the enthusiasm with which Romero served it up in Dawn of the Dead or the gusto with which the Italians did in their Romero imitators.