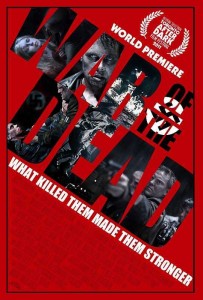 Finland, 1941 during the midst of World War II. American soldiers led by Captain Martin Stone have been sent to accompany Finnish soldiers on a mission to destroy a Nazi bunker on the Russian border. As they arrive, much of the unit is wiped out by enemy fire. The survivors then discover that the Nazi experiments have created an army of zombies.

The Nazi zombie film is a sub-genre that has turned up with persistent regularity since the 1970s. The fad was kicked off by Shock Waves (1977) and in the next few years we had the low-budget likes of Night of the Zombies (1981), Oasis of the Zombies (1981) and Zombies Lake (1981). The genre underwent a revival in the late 2000s with Outpost (2007) and Dead Snow (2009), both of which have produced sequels, even as a Found Footage film shot in First Person Shooter perspective with Bunker of the Dead (2015).

War of the Dead was a directorial debut from Finnish director Marko Makilaakso. Beyond this, Makilaakso has quite a body of work as a director of commercials and music video. Makilaakso shot the film in 2007 but financing collapsed part way through and it was never completed until 2011 after Mikilaaso raised completion funds via a crowdsourcing campaign. Makilaakso returned to genre material several years later with It Came from the Desert (2017).

The methods whereby the film was made and produced may feel like fan filmmaking but to Marko Makilaakso’s credit the result up on screen look professional and well-polished. The action scenes are assured in their set-ups, the locations, costumes and vehicles look convincing. There is not even any real evidence of low-budget corner-cutting – you could not tell the difference from a regular Hollywood film if you did not know anything about the making of the film. The film has even imported a mildly well-known name, British actor Andrew Tiernan (who plays with a broad American accent – why the production could not have imported an actual American actor to play the part rather than get a British actor to fake it is a good question).

You might compare Marko Makilaakso to fellow Finnish director Timo Vuorensola, another amateur filmmaker who has obtained a big budget (and has a preoccupation with Nazis). While Vuorensola’s films – Iron Sky (2012) and Iron Sky: The Coming Race (2019) – look exactly like amateur films that have gained enormous special effects budgets, Makilaakso displays all his competence down at the directorial and production level, whereas Vuorensola topples over into broad slapstick.

On the other hand, War of the Dead remains just another zombie film, of which the 2010s are piled with a vast number more than there should be. The creative vein of the genre feels dredged out and everything just keeps repeating the same moves. And with War of the Dead, Marko Makilaakso does nothing different to everything else that is out there.

The other issue is the war film aspect. Marko Makilaakso creates much in the way of gunfire and running around the snowy woods. On the other hand, there is a repetitiveness to it – all that seems to happen is that people run, shoot and fight zombies and there is never anything else to the plot. It often feels as though scenes could have been assembled in any order and it made little difference. I never particularly felt the characters were engaged in a brutal to-the-death battle for survival or that they were struggling to complete an objective. Indeed, in the early sections before much of the troupe gets wiped out, it is often difficult to individually differentiate the characters one from another amid all the shooting. You suspect that what War of the Dead should have been was a videogame as the constant shooting and running would have been perfect for the type of combat scenarios that games specialise in.