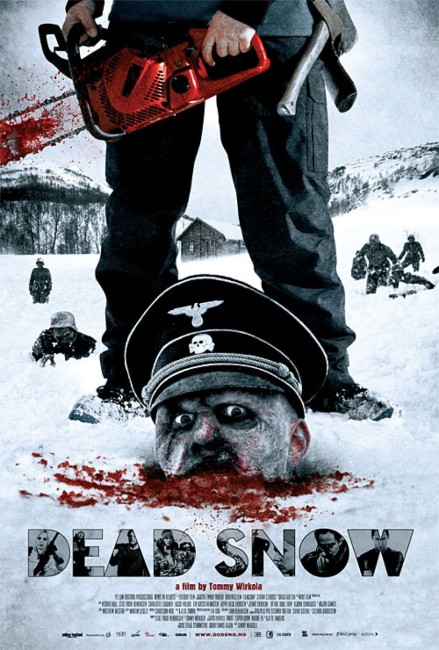 A group of med students travel up to a remote cabin in the mountains near Oksfjord in Norway. A mystery man comes by the cabin and asks for a drink. Over this he tells them how during World War II sadistic Nazi troops were driven out by the locals and hid in these mountains with stolen valuables. As the group settle in for the night, they find a box containing jewellery and gold coins. Soon after they are attacked by the Nazi soldiers who have risen from the snows as zombies.

Zombie films have become big in the 00s all over again. The way was led by the hits of 28 Days Later (2002), the remake of Dawn of the Dead (2004) and the affectionate parody of Shaun of the Dead (2004). These opened the gateways to a horde of imitators, which have consisted of either gore-drenched reproduction of the George Romero basics or works that placed tongue-in-cheek and/or conflated the zombie basics with something wacky. If these zombie films draw from George Romero circa Dawn of the Dead (1978), then the Norwegian-made Dead Snow is a reworking of a peculiar subset of Romero imitators that specialised in Nazi zombies – see the likes of Shock Waves (1977), Oasis of the Zombies (1981), Zombies Lake (1981) and Night of the Zombies (1981). A couple of years before this, there had been the reasonably effective British-made venture into the Nazi zombie genre with Outpost (2007), which subsequently spun out several sequels, War of the Dead (2011) and Bunker of the Dead (2015).

I was anticipating Dead Snow. It had built up a reasonable internet buzz, being greeted by phrases like “gore-drenched,” “tongue planted in cheek” and called a witty parody of the zombie movie and its conventions. The Nazi zombie image is always a resonant one – even when it has been conducted badly as in the abovementioned 1980s efforts. Certainly, as the film kicks in with Tommy Wirkola’s camera sweeping across vast fjord and mountainous landscapes, Dead Snow has an expansive look that seems to have a better budget than all of the aforementioned Nazi zombie films put together.

In the opening scenes, Tommy Wirkola seems determined to tick off his horror movie credentials – a character wears a T-shirt from Peter Jackson’s Braindead (1992), while the situation is compared to horror movies where characters head into the wilderness out of cellphone coverage, which then tracks off into a debate about whether The Evil Dead II (1987) can be seen as a film in its own right or is just a remake of The Evil Dead (1981). (Although what got me about the debate was how all of the films cited – Friday the 13th (1980), The Evil Dead films and April Fool’s Day (1986) – were made well before the widespread usage of cellular networks, which surely negates such a question).

For all its promise and build-up, Dead Snow emerges unevenly. Tommy Wirkola does nothing particularly interesting with the basic premise – all that he gives us is a Nazi zombie film, no more, no less. In that this is a second-generation Nazi zombie film, one expected something more than that. Wirkola does attempt to add a layer of irony and parody in the abovementioned genre in-references. However, this ends almost as soon as the zombies arrive and the horror movie nerd – who seems to be being set up akin to Jamie Kennedy’s character in the Scream movies – is one of the first characters to be slaughtered.

The film reaches a point near the end where Wirkola clearly places his tongue in cheek in the scenes where Vegar Hoel has to chop his arm off and then starts a fire to cauterise the wound to avoid zombie infection, only for the zombie to reappear and bite into his legs. However, this is a lurking sense of humour that Tommy Wirkola never seems to push either for biting parody or for belly laughs in the same way that his clear models like Braindead and the Evil Dead films do.

Certainly, Dead Snow is extremely gory and Tommy Wirkola does not fail to live up to expectation in that department. There are numerous scenes of characters having their intestines spilled, even one character hanging from the side of a cliff by her intestines, and a number of entertaining means of despatch.

Ultimately though, Dead Snow never offers too much that is different to the zombie basics. There seem an ample number of scenes that Wirkola could have built out into strong and harrowing suspense but these often seem hurried in an effort to get to the splattery punch line. The characters seem a singularly uninteresting bunch who fade into a blandly indistinguishable sameness.