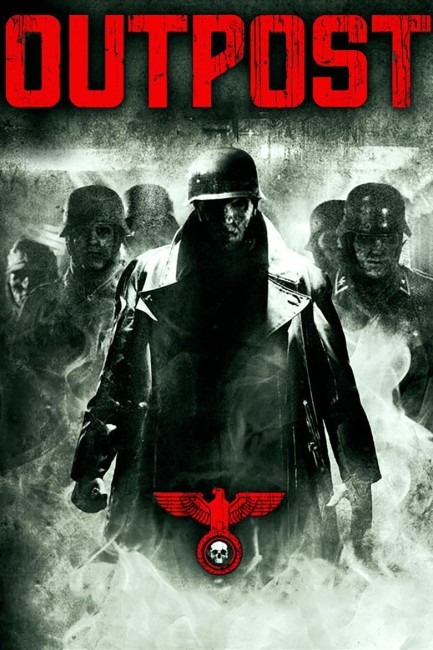 A group of mercenaries are hired by Hunt to travel into an Eastern European war zone being fought over between government troops and insurgents. On a quest for what they were initially told was minerals, Hunt leads them to an old Nazi bunker. Inside, he finds and reactivates equipment built by the Nazis that he claims manipulates the Einsteinian Unified Field. This however serves to bring back to life a troop of Nazi soldiers that were experimented on and have been turned into zombies.

Outpost was a modestly made British horror film that gained some reasonable word of mouth around the world. It was a directorial debut for young British filmmaker Steve Barker.

Nazis hold a fascination in B horror territory, something that goes all the way back to the likes of The Flesh Eaters (1964) and They Saved Hitler’s Brain (1964). It was however the US-made Shock Waves (1977) that created the memorable image of a troupe of Nazi zombies. The idea was quickly copied by the B-budgeted likes of Oasis of the Zombies (1981), Zombies Lake (1981) and Night of the Zombies (1981), and was revived in more recent years in the Norwegian Dead Snow (2009) and sequels, War of the Dead (2011) and Bunker of the Dead (2015).

The Nazi B movie saw a revival during the mid-1980s with The Keep (1983) about Nazis in a fortress facing a great supernatural evil and this idea has been copied in subsequent films such as The Bunker (2001) and The Devil’s Rock (2011). Outpost wields the Nazi zombie theme to the basics of The Keep – the idea of soldiers venturing into a military bunker/fortress where they stir up and end up fighting off a buried evil. Although perhaps even more so, what Outpost ends up resembling is a film like Dog Soldiers (2002) and several others that copied the theme of a unit of soldiers fighting a supernatural menace.

Outpost does nothing particularly original; it simply stirs these ideas into a solid and tightly constructed effort. The venture into the bunker comes filled with taut suspense. Barker tautly draws the tension out as we start to discover what is going on and pulls some grisly despatches when the zombies come to life. The show works as a lean, well-oiled horror vehicle.

Like Dog Soldiers, Steve Barker has clearly had someone with military training advising him and does an impressive job of making the soldiers look like a tight and well-rehearsed fighting unit. As the leader of the group, Ray Stevenson is impressively tough and tight-lipped.

Einstein’s Unified Field Theory, which was also employed as raison d’etre in The Philadelphia Experiment (1984), is rehashed as a perfectly serviceable piece of handwavium to explain everything that is going on.

Steve Barker went on to make a sequel with Outpost: Black Sun (2012). This was followed by a third film, the prequel Outpost: Rise of the Spetsnaz (2013), which was handled by others.

Outside of his involvement with the abovementioned Outpost sequels, Steve Barker also made the zombie film The Rezort (2015).