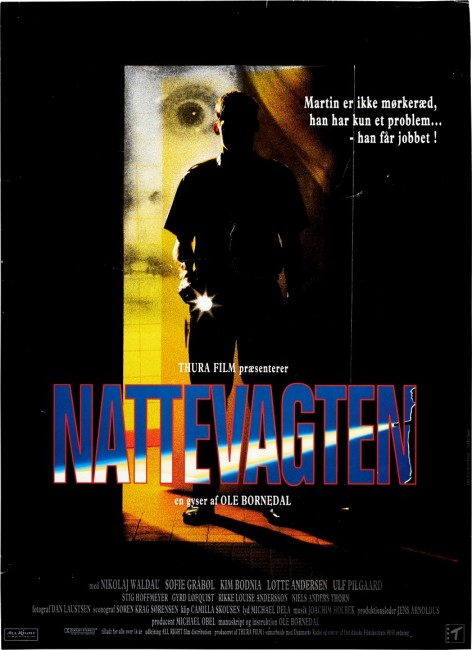 University student Martin Bork accepts a job as nightwatchman at a mortuary. He soon finds being alone with the corpses somewhat unnerving. At the same time, Martin’s good friend Jens challenges him to a competition – each can suggest doing something outrageous to the other and that one that chickens out first has to get married. However, when Jens sets him up with the teenage prostitute Joyce and plays games with her, Martin thinks the game is going too far. At the same time, a serial killer is plaguing the city and scalping women. Someone appears to be moving and sexually interfering with the victim’s bodies after they are brought to the morgue. Martin is not sure if it is Jens playing games or the serial killer. As both Joyce and Martin’s girlfriend Kalinka get wound into the games, Martin comes to realize that the serial killer is attempting to have him blamed for the crimes.

Nightwatch was a respectable international festival and arthouse hit when it came out. It announced the presence of Danish director Ole Bornedal. Bornedal had first appeared with a tv movie that had the intriguingly upfront title of Masturbator (1993) and became a sensation following Nightwatch. Subsequently, Borndeal has not quite fulfilled the promise of Nightwatch. Other than going to America to direct the English-language remake of Nightwatch, his other work has been undistinguished – a passable tv-made horror film Deep Water (1999); the critically divided period drama I Am Dina (2002); The Substitute (2007) about an alien schoolteacher; the identity mix-up thriller Just Another Love Story (2007); the black comedy Small Time Killers (2017); and a dull venture to the US mainstream with The Possession (2012), although he did return to form with the savage Deliver Us From Evil (2009).

There is a great deal of fun to Nightwatch. Ole Bornedal creates a great opening. He sets up the cocksure, incredibly handsome hero Nicholaj Coster Waldau and then proceeds to progressively wear his confidence down – from the introduction to the job by his creepy geriatric predecessor suggesting that he get a radio to deal with the silence, then learning he has to cross a room of dead bodies in order to check the key that has been improbably located there to stories luridly told about a former necrophile colleague and how he will get bad breath, while his concerns about the alarm or what happens if the door shuts are offhandedly dismissed: “Don’t worry – that’ll never happen.”

On the first night on the job, Ole Bornedal gets right inside Waldau’s fear at being left alone there – the scene opens with a song playing on the soundtrack, which suddenly fades into echoing silence as the lights go off with Waldau left having to cross the morgue on his own to check the key. Borndeal maintains the film with a superbly tight series of twists and black comic loops – Kim Bodnja as the out-of-control best friend and their dares, the games with the hooker, even the detective’s seemingly irrelevant request for a sperm sample.

Nightwatch is a film that has been entirely contrived as a series of sharp reversals and nagging uncertainties and twists. It is contrived but the twists and turns that Ole Bornedal puts Nicholaj Coster Waldau and the audience through are superb. There is a remarkably tensely sustained climax with the killer having Nicholaj Coster Waldau and girlfriend Sofie Gråbøl tied up and about to kill them with Kim Bodnja is handcuffed up and facing the choice of whether to sever his own hand with a knife to get free to save them or not.

Steven Soderbergh brought Ole Bornedal to America to direct an English-language remake Nightwatch (1998) for Dimension Films, starring Ewan MacGregor in the Nicholaj Coster Waldau role, Patricia Arquette as the girlfriend and Nick Nolte as the detective. Although plagued by troubled distribution, this is also worthwhile. Ole Bornedal follows the original exceedingly closely, sometimes even replicating scenes shot-for-shot, although the American version cleans the scabrous undertone of the original up somewhat. Ole Bornedal does also have the benefit of Steven Soderbergh co-writing the script with him.