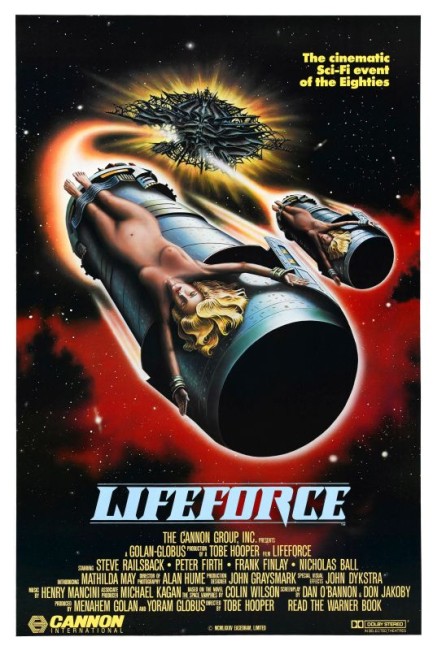 The Anglo-American space shuttle Churchill rendezvouses with Halley’s Comet. The crew are amazed to find a two-mile long spaceship in the head of the comet. Inside the spaceship are hundreds of humanoid bodies in suspended animation. However, the Churchill’s return mission goes wrong and only the three bodies brought back from the spaceship survive. Examiners are startled when these bodies return to life and turn on humans, sucking out their lifeforces to leave the victims withered, desiccated corpses. Impervious to bullets, the aliens walk out into the streets to claim more victims. The victims then return to life, infected with a desperate need to devour lifeforce too lest they disintegrate into dust. The outbreak reaches nightmare proportions and London is placed under military quarantine. Meanwhile, the Churchill’s commander Tom Carlsen returns to Earth in an escape pod. He has developed a strange psychic link with the female alien and sets out to hunt her down as she passes through a succession of host bodies.

Lifeforce is a film that squarely divides opinion. It was a box-office flop at the time it came out and was roundly trashed by critics. A 1985 end of year reviewers’ poll in Sight and Sound magazine saw Lifeforce placed in both one critic’s Top 10 and listed as another critic’s worst film of the year. Audiences since divide between either tossing Lifeforce into Golden Turkey status and those who see a flawed brilliance in it. Those who proclaim the unsung merits of the film often cite Mathilda May’s naked body as a substantial reason.

Lifeforce was based on a novel The Space Vampires (1976) by British criminology and occult writer Colin Wilson. The film was mounted by producers Menahem Golan and Yoram Globus, who in the 1980s were responsible for numerous cheap action and martial arts films usually featuring Chuck Norris or Charles Bronson, as well as several awful Italian-made fantasy films such as Hercules (1983), The Seven Magnificent Gladiators (1985) and The Barbarians (1987). For a brief time, Golan-Globus signed a three-picture deal with Tobe Hooper. Hooper was then riding on the cult acclaim of The Texas Chain Saw Massacre (1974) and the big-budget breakthrough success of the Steven Spielberg-produced haunted house film Poltergeist (1982).

Golan and Globus sank the biggest budget they ever afforded a film into Lifeforce – a then substantial $25 million. They clearly saw Lifeforce as being a film exploiting the same sf/horror niche as Alien (1979). To such wit, they hired Dan O’Bannon, then a hot genre name as a result of Alien on script, as well as John Dykstra, the man behind the visual effects on Star Wars (1977).

Instead, Lifeforce ended up being a big flop. In fact, Lifeforce and Tobe Hooper’s other two big-budget productions for Cannon, the remake of Invaders from Mars (1986) and The Texas Chainsaw Massacre 2 (1986), ended up almost single-handedly sinking Cannon’s finances and forced Golan and Globus to declare bankruptcy a couple of years later. Following his dalliance with Cannon, Tobe Hooper’s career slid down through the 1990s to much dreary direct-to-video hackwork and tv pilots. (See below for Tobe Hooper’s other films).

I kind of liked Lifeforce. If nothing else, it is a conceptually extraordinarily ambitious film that bites off far more than it is ever capable of coherently presenting. The sheer profusion of ideas that it wields bewildered most audiences but these actually prove to be its pleasure. It comes across as a dazzling conceptual blend of metaphysical whodunnit – sort of a supernatural variation on John Carpenter’s The Thing (1982) – an ingenious highbrow science-fiction reworking of classical vampire mythology and a big-budget apocalyptic effects horror show.

Lifeforce can even sort of be construed as a science-fictional reworking of Bram Stoker’s Dracula (1897) – note parallels between Carlsen’s journey into the comet and Jonathan Harker’s opening journey to Castle Dracula in Stoker, and the later scenes using hypnosis of a victim to track the vampire. Dan O’Bannon and co-writer Don Jakoby also appear to be consciously making reference to Nigel Kneale – the images of the unearthed alien artifact and particularly London under influence of alien energies recalls much of Quatermass and the Pit/Five Million Years to Earth (1967). Certainly, you can guarantee that Lifeforce‘s conceptual juggle of ideas would have made Nigel Kneale green with envy.

Hooper, Dan O’Bannon and Don Jakoby miscue a number of times – there are more than a few inconsistencies in the script and a confusing ending. The psychic bond between Steve Railsback’s commander and female vampire Mathilda May is not made clear. The actors seem confused by the proceedings, in particular Steve Railsback who gives a wooden performance. The best of all is French model Mathilda May who, as mentioned, spends the entire film spectacularly undressed and whose entire role is unspeaking and limited to looking enigmatically mysterious.

Hooper does impress as the conflict takes on more and more massively scaled proportions – this is one of the few vampire films to take into account the fact that the spread of vampirism must be exponential. The images of London under attack are impressively mounted. Lifeforce is certainly not a film that lets its pretensions get away with it – it has that O’Bannon-esque sense of fatalistic black humour – not even the British Prime Minister is allowed to get above his station and is shown furtively vampirising his secretary behind a filing cabinet. John Dykstra’s visual effects and Nick Maley’s makeup effects are excellent.