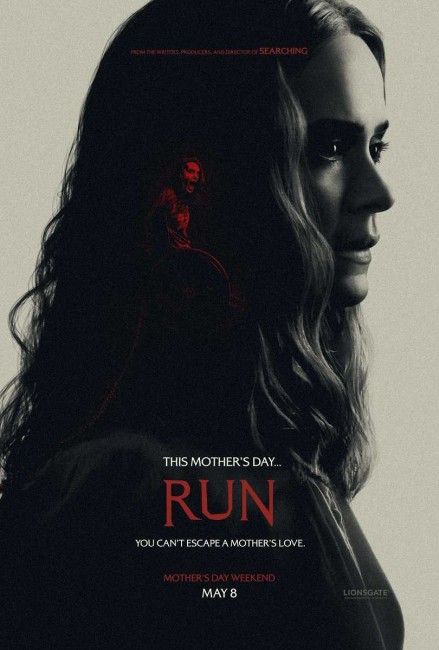 Seventeen year-old Chloe Sherman grows up with her mother Diane in the rural town of Pasco, Washington. Chloe has multiple health issues that have had her confined to a wheelchair. She has been home-schooled by her mother but is looking forward to receiving her university acceptance any day. Chloe then discovers by accident that the pills she is being given come from a bottle that has her mother’s name on them but her mother insists she is mistaken. After questioning the pharmacist, she finds that the pills are intended for animals and will cause paralysis in humans. Believing that her mother has sinister intent in store, Chloe attempts to make an escape despite being in the wheelchair. When her mother becomes aware that Chloe knows, she attempts to imprison her.

Run. – both the opening and end credits write the title with a full stop after it – was the second film from Aneesh Chaganty, an American-born director of parents who had emigrated from India. Chaganty had previously made Searching (2018), a thriller that was entirely shot on various iPhones, webcams and camcorders in which John Cho searches for his missing daughter.

Among the demands for greater diversity on screens that have gone out in the last couple of years, there has also been a call for the portrayal of people with real disabilities on screen. To this extent, the film casts Kiera Allen, a 22 year-old actress who has been in a wheelchair for several years and had previously appeared on stage (although not on film).

Run. is written around this very disability – a girl in the wheelchair who believes her mother is up to no good and of her attempts to find out the truth and escape. It is in essence an Imprisonment Thriller but one where the impairment of the central character becomes the locus of imprisonment in itself ie. this is a film that wouldn’t work it if were cast with a fully mobile actor.

Aneesh Chaganty generates reasonable paranoia out of Kiera Allen’s increasing discoveries that her mother is up to sinister purpose and may even have entirely fabricated her illnesses. Sarah Paulson, a mainstay of American Horror Story (2011- ) and various Ryan Murphy tv shows, does the evil mother role well.

The most brutal suspense comes in the middle of the film when Kiera Allen discovers she has been locked in her room by her mother and contrives an escape by winching herself out along the roof and around the side of the house to break in through another window, only to then find that she cannot get down the stairs because her mother has disabled the electrics of her chair lift and has to throw her wheelchair down the stairs and then tumble down herself.