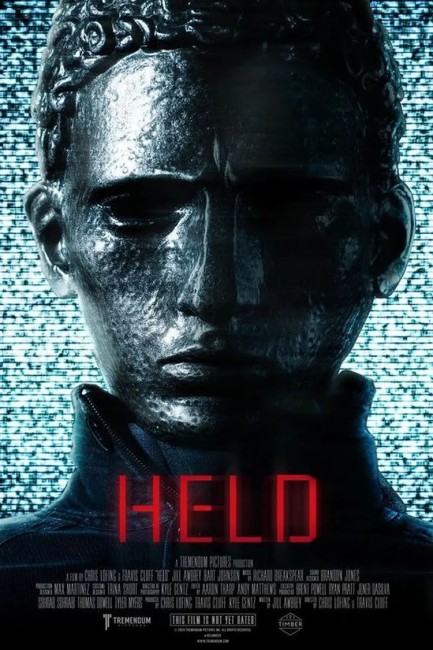 Emma Barrett heads to a luxury home in the countryside that she and her husband Henry have rented for their wedding anniversary. He joins her shortly after. They wake in the morning to find they are locked into the house. A voice tells them they are being watched on cameras and must do everything they are told. When they do not, they experience intense pain from devices that have been implanted behind their ears while they slept. The mysterious voice directs them to start behaving as though they were in a regular marriage at the same time as exposing the secrets they hide.

The directing duo of Travis Cluff and Chris Lofing first appeared with the Found Footage film The Gallows (2015) for Blumhouse. Since then the two made the requisite sequel The Gallows Act II (2019), as well as produced the desert island horror film Prey (2019) for Blumhouse and Behind You (2020). The interesting thing about Held is that the script comes from its lead actress Jill Awbrey. Awbrey is a complete unknown who came out of nowhere with Held. Prior to this, she had only appeared in four short films, most of which she had written/produced and occasionally directed herself.

Held is an Imprisonment Thriller. This is a genre that goes all the way back to works like The Collector (1965) and The Fanatic/Die, Die, My Darling (1965) and centres around individuals who are held captive for one or other reason. The films then ride a rollercoaster of tension in following the captive’s hopes for escape, seeing these thwarted and so on.

Held is an Imprisonment Thriller that certainly comes with a novelty premise – married couple are imprisoned in a luxury house and forced to enact a traditional marriage by a disembodied voice, at the same time as this serves to bring out hidden secrets in their marriage. I was reminded somewhat of the British Await Further Instructions (2018) in which a family is trapped inside their house and receive instructions from their tv set, which proceeds to push them to extremes.

With an interesting premise set up, Cluff and Lofing generate okay tension, although there is never anything that holds you on the edge of the seat. What disappoints is that the film never particularly rides the rollercoaster of twists and tension that most of the other Imprisonment Thrillers do. There are a couple of scenes where the couple try to break out through the crawlspace but that is about it.

What killed the film for me was an improbable twist ending. [PLOT SPOILERS]. Here Jill Awbrey makes the discovery that the entire house is a set-up created by a Secret Society that runs a commercial operation where they promise to reunite couples in a traditional marriage (presumably by torturing one or other of the parties into submission) and that Jill’s husband has signed up for it.

To me, this seems an absurd and extreme method of marriage counselling. The reality is that people do not do well when under psychological duress – while they may comply with what they are made to do when there is no other option, most seek to break free and escape at the earliest opportunity. It feels as though what we have a script that may express Jill Awbrey’s feminist feelings about toxic marriages/relationship but when examined in terms of reverse logic and psychological, the plausibility of the scenario seems far-fetched.