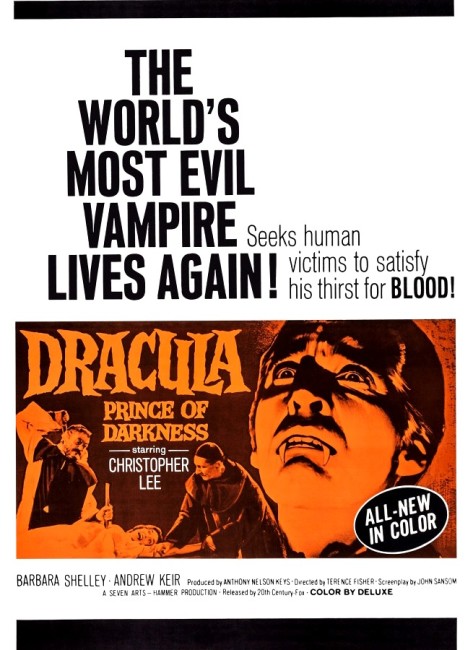 Two English couples holidaying in Transylvania are abandoned on the roadside after their coach breaks down. They are picked up by a driverless black coach and taken to Castle Dracula where they are granted hospitality by Dracula’s manservant. During the night, one of the men is attacked and gutted by Dracula’s manservant and his blood used to revive Dracula. Two of the group manage to flee the castle. In the village below, they join a local priest in standing up to destroy Dracula.

Dracula – Prince of Darkness was the third of Hammer’s Dracula films. Unlike the first sequel The Brides of Dracula (1960), Prince of Darkness brings back Christopher Lee who had refused to return to the series until he had established himself as a serious actor first.

The Brides of Dracula worked well despite the absence of Christopher Lee but Prince of Darkness achieves somewhat less successfully despite Lee’s return. It is a film that never coheres or gets fired up despite a great deal of potential to do so. A large part of the problem is Christopher Lee who, while he returns, gets no dialogue (although Lee claims this was his own choice because the dialogue he was given was so awful). Reduced to merely hissing and dilating his red contact lenses, this has the effect of making Lee much more animalistic – something that Lee conveys most effectively. However, the net result is that the central threat in the film is like a tiger in a cage, prowling and roaring, but never getting to pounce.

Certainly, many of the other elements come together well. The opening of the film – warnings to avoid the castle; villagers refusing to acknowledge its existence even though it sits in front of their eyes; travellers abandoned in the middle of nowhere and then the appearance of a mysterious black coaches harnessed to horses that have wills of their own; and the castle, which is conversely shown to be welcoming with dinner laid out and a fire stoked up, even luggage placed in their respective rooms – builds an increasing sense of unease.

The tension finally erupts in a shock sequence where Charles Tingwell is stabbed and his body is hoisted upside down over the catafalque containing Dracula’s ashes and the throat slit to spill his blood, which brings the ashes to life. It is a conceptually remarkable sequence – one that created considerable controversy at the time, blasphemous inversions of The Crucifixion being seen in it and all – although today seems tame.

Thereafter, Dracula – Prince of Darkness becomes more a series of set-pieces, loosely connected by the overall plot of Dracula trying to seduce Suzan Farmer while husband Francis Matthews sets out to rescue her. There are a number of good sequences interspersed throughout – notably the climax where Dracula runs out onto the ice and Andrew Keir shoots into it around him, causing it to crack and Christopher Lee to be swallowed up by the running water (although the sequence is betrayed by cramped sets – the ice-pack being only several yards square. It is a problem shared in other parts of the film too – the castle corridor where most of the skulking takes part is about twenty feet in length and contains only two doors). The film is also happy to swipe the Renfield character out of Bram Stoker – calling him Ludwig – with Thorley Walters giving an amusingly doddery performance in the role.

The most remarkable sequence in the film is the scene where Barbara Shelley is held down on a table, hissing and writhing, as a stake is hammered into her heart by the dispassionate priesthood. It is perhaps the most potent image of sexual repression in all of British horror cinema. Indeed, Dracula – Prince of Darkness, more than any of the Hammer Draculas, embodies the recurrent image of sexual repression threatening to emerge to tear Victorian society apart and its dispassionate elimination by men of reason. The travellers are deliberately set up as representatives of English genteel in order to be torn apart – the strongest image of this polarity is the turning of the prim, uptight and anxious Barbara Shelley into a voluptuous vampire, begging Francis Matthews “Give us a kiss.” The sexual overtones in the scene where Christopher Lee causes Suzan Farmer to kneel and drink from the cut he opens with his fingernail in his chest are incredibly vivid.