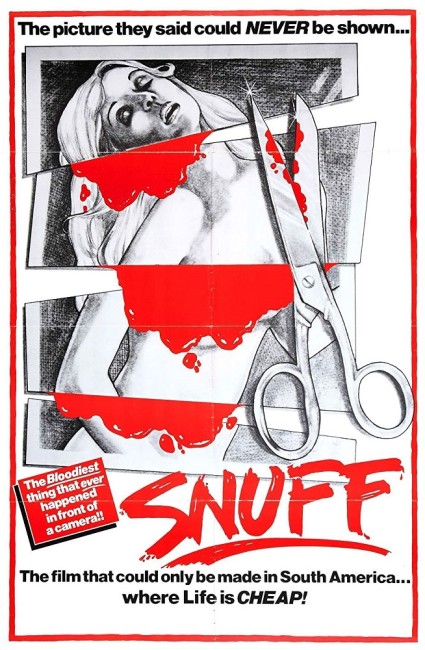 In Argentina, the cult leader Satan has four drug-dealing female bikers as his lovers/acolytes. He pushes each of them towards submission to him, cruelty towards each other and acts of random violence and murder of other people. At the same time, actress Terri London arrives in Buenos Aires with her director boyfriend Max Marsh but immediately heads off to meet with handsome German playboy Horst Frank that she has been seeing. However, Horst’s household has been infiltrated by one of Satan’s acolytes and they have their sights set on Terri.

Snuff was a film that caused an enormous degree of controversy when it came out in 1976. It purported to be the first genuine Snuff Movie – one that depicts on-screen scenes of murder. Although what became apparent was that this was a publicity scam. The producers picked up a film entitled The Slaughter, which had been originally shot around 1971 by husband and wife directors Roberta and Michael Findlay but was regarded as too poorly made to be released. To this the producers added about five minutes of footage where they faked the killing of an actress on the set at the end (the scene is discussed in detail below) and claimed that this was real snuff movie footage. They even went to the extent of releasing the film with no credits to further the impression. They then created a bunch of protests from fictitious moral decency groups and arranged for hired actors to conduct protests outside the theatres that were screening Snuff.

The results propelled a film that would otherwise been a completely forgotten grindhouse release at best into the arena of infamy. In fact, this succeeded too well and host of countries leapt upon the supposed censorship outrage that had been manufactured and banned Snuff. (See Censorship Controversies). The film finally received a dvd release in 2003 with a dvd cover that was rather amusingly mocked up to look like a brown paper bag.

The bulk of the film, excepting the last couple of minutes, are comprised of scenes that were shot by the Findlays as The Slaughter. The Findlays give the impression that they started shooting The Slaughter without any kind of script. Scenes seem randomly thrown together without much connection between them. There is never any sense that the things that are happening seem to be going anywhere.

The film opens on various scenes of girl bikers arriving in the middle of nowhere, finding one of their group (Ana Carro) has absconded with their drugs whereupon they chase her. A few minutes later, we see them holding the girl down and torturing her by twisting a knife between her toes (even though the shooting of the scene clearly shows that nothing much is happening to hurt the actress). These scenes announce about all that we can see of Snuff’s quality – bad acting, vacant dialogue and crude camera set-ups, although the film is at least reasonably well photographed for the era.

There are various random killing scenes – a very unconvincing scene where one of the biker chicks enters an airport bathroom and throws a knife at a businessman and then slits his throat; where the cultists attack and kill the owner of a garage/convenience store. There is a scene towards the end where Clao Villaneuva is tied to a tree, stripped, whipped and a knife gouged into his body – although this is a ridiculously tame sequence where we never see the knife contacting his body.

During these scenes, the Findlays clearly seem to be making a film that capitalises on the notoriety of the Manson Family killings. There is an interesting element where Enrique Larratelli’s cult leader Satan seems to be invoking the girls to debase themselves in order to submit to him – we even see a scene where he commands one of them to bow down as he has sex, but this is tedious (especially considering the Findlays reputation as porn filmmakers) as all we get is closeups that go on for several minutes of the actress’s face as something is done to her off-camera, although we never find out what.

All of this is interspersed with scenes of a starlet (Mirtha Massa) arriving in Argentina, her abandoning her middle-aged director/boyfriend (Aldo Mayo) to take up with a German playboy (Clao Villaneuva). The affair is deadly dull. Many of these scenes are padded out with quite a bit of footage that the Findlays have shot of what looks like the Rio carnival (even though the film is meant to be set in Argentina). Only occasionally do they remember to get back to the activities of the cultists.

And then there is the infamous faked snuff scene at the end. We suddenly go from Mirtha Massey being dragged away to be tortured to where the film breaks the fourth wall and pulls back to show the film crew filming the scene. One of the members of the production crew persuades an actress to do a love scene and starts making out with her on a bed as the crew films it. He then starts cutting her arms, snips her fingers off with a pair of pliers, uses a buzzsaw to cut off her hand at the wrist and then cuts open her stomach and pulls out and starts playing with her intestines as she lies there twitching. It is obvious this has been inserted as the camerawork becomes handheld and quite different to what we have seen earlier. Not to mention the fact that all the other gore scenes have been quite tame and unconvincing in comparison. There’s something quite nastily sordid about such a scene. Especially in that producers have pushed something to this extreme not for the purpose, of making a dramatic film but creating a scam to sell a film. There has also been the argument made that this turns Snuff into the first Found Footage Film.

The snuff scenes were shot by Simon Nutchem who went on to direct several other films including the horror film Silent Madness (1994) and Savage Dawn (1985) about bikers terrorising a small town.