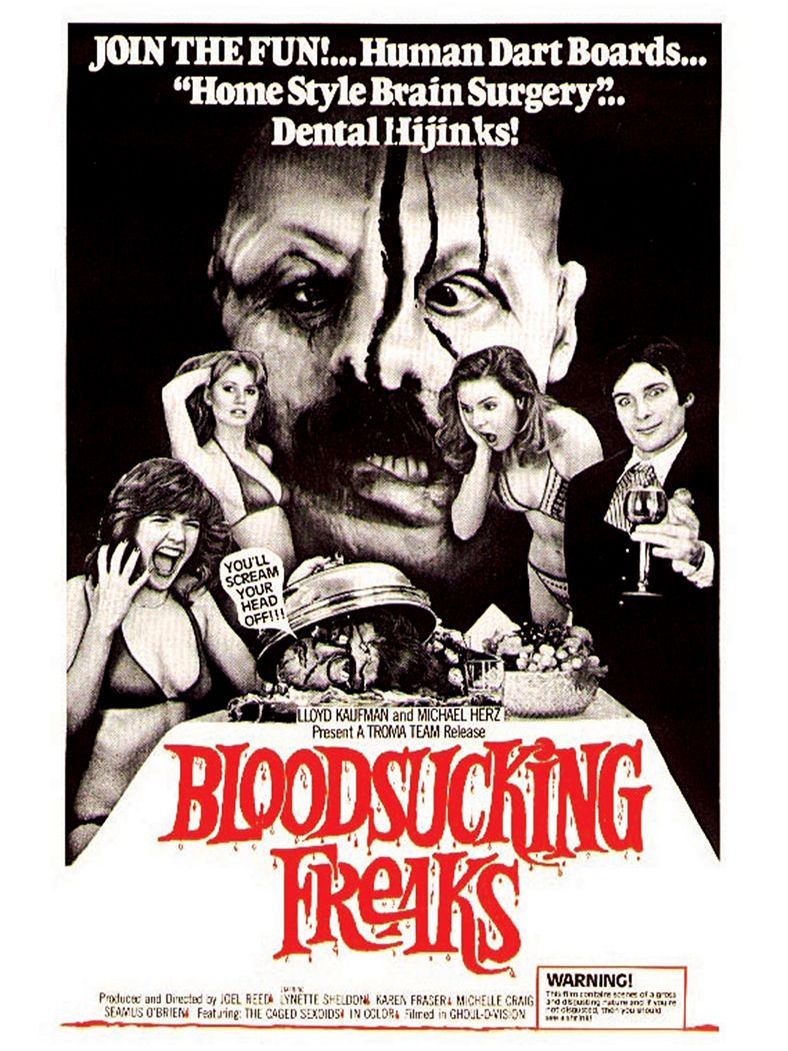 aka The Incredible Torture Show

In New York’s Soho district, the stage magician Sardu runs the Theater of the Macabre, which specialises in acts where women are tortured and dismembered. The audiences dismiss it as fakery but the gore is real. Behind the scenes, Sardu and his dwarf assistant Ralphus torture and mutilate women for their own pleasure, as well as sell girls they have abducted into slavery. When the critic Cresey Sielow contemptuously dismisses the show, Sardu has him abducted and tortured. At the same time, Sardu also abducts the ballerina Natasha de Natalie and determines to break her will in order to make her agree to perform in his new show.

Blood Sucking Freaks is a film that has developed a considerable notoriety. It was originally made in 1976 where it was intended as no more than a grindhouse exploitation film – and indeed did little business outside of New York City. However, in 1981, it was picked up for wider release by the newly formed Troma Films. The film attracted some controversy first when Troma tried to release it under the wilfully contrived title The Incredible Torture Show and US newspapers refused to advertise it because of the acronym. Troma then released the film under the title Blood Sucking Freaks and attracted even more controversy when it was targeted by the feminist group Women Against Pornography. Censors in almost every part of the world demanded cuts, which naturally caused the film’s reputation to soar. Troma finally released a ‘Director’s Cut’ in 1999.

The spirit of Herschell Gordon Lewis’s cheap splatter films hangs over Blood Sucking Freaks – in particular, Lewis’s The Wizard of Gore (1970), which also features a stage magician conducting a Grand Guignol theatre where he blurs the line between reality and illusion as to whether the audiences are really seeing people being gorily mutilated. In the lead role here, Seamus O’Brien is probably a much better actor than Ray Sager was as Lewis’s magician. (There is even one quite good performance in the film from Dan Fauci as a corrupt cop). The gore in Blood Sucking Freaks is also aimed at a much higher degree of realism than is the case in Lewis’s films where it is always intendedly unrealistic. Blood Sucking Freaks also shares with Hershcell Gordon Lewis’s films a painful cheapness – it looks as though it has been shot entirely in basements.

It pays in watching horror cinema, particularly horror exploitation cinema such as this, not to have too highly pronounced a sense of moral outrage. That said, Blood Sucking Freaks manages to be one of the most vile films one has ever set down to watch. The film is nothing more than a catalogue of tortures against women. In the opening scene alone we see:– a naked girl having her thumbs placed in a thumbscrew and then a clamp twisted into her head; another naked woman being whipped and forced to crawl across a stage before her hand is cut off at the wrist with a hacksaw; and then the dwarf assistant (Luis De Jesus) gouging out and devouring a third woman’s eyeball.

Elsewhere, we get such charming images as a bound woman being given electric shocks to her nipples; a woman stretched apart on an X crucifix; and a game of backgammon between Seamus O’Brien and Luis De Jesus with severed fingers used as chips. There is the ingenious moment where a woman is placed in a guillotine and the rope holding the blade is placed in her teeth, where she is then caned but is unable to cry out lest she drop the rope and decapitate herself.

The one scene that gained Blood Sucking Freaks its notoriety when it came out is the scene where a depraved doctor (Ernie Pysher) forcibly pulls all of one woman’s teeth out, whereupon we then see him moving towards her face unzipping his fly; and then in the next shot we see him cutting her hair, shaving her head and then putting a power drill to her bare skull, drilling a hole and planting a straw in to suck her brains out.

All of this is standard Herschell Gordon Lewis fare but director Joel M. Reed seems to take it even further than Lewis ever did. Lewis’s films, barely defensible as they are, seem at best fueled by a desire to outrage and shock and where Lewis’s tongue often seems planted in his cheek; Blood Sucking Freaks by contrast seems fueled by an overriding misogyny. There is an uncomfortably sweaty sordidness to it – in watching the film, you are left with a disturbing feeling like you have strayed into a private den and are watching one person work out their uncensored sexual fantasies. Beyond the display of extreme acts of gore, Joel M. Reed seems to delight in the degradation of women – showing the dwarf horsie-riding them around the basement; women forced to kneel naked and be used as dinnertables; a woman with her butt painted with a bullseye in a game of darts; and the scene where Seamus O’Brien commands the dwarf to take a woman away: “Put her to use in the toilets – her mouth will make a most interesting urinal.”

The film lacks even a basic credibility – it is impossible to believe that somebody would be able to get away with abducting and killing so many people and that the police would not notice, or that after staging a live splatter show the police or health authorities would not in any way investigate to see whether the gore was real.

Director Joel M. Reed made a number of other exploitation films. His other genre entries include the horror anthology Blood Bath (1976); the Nazi zombie film Night of the Zombies (1981); and the softcore spy film G.I. Executioner/Dragon Lady (1984).