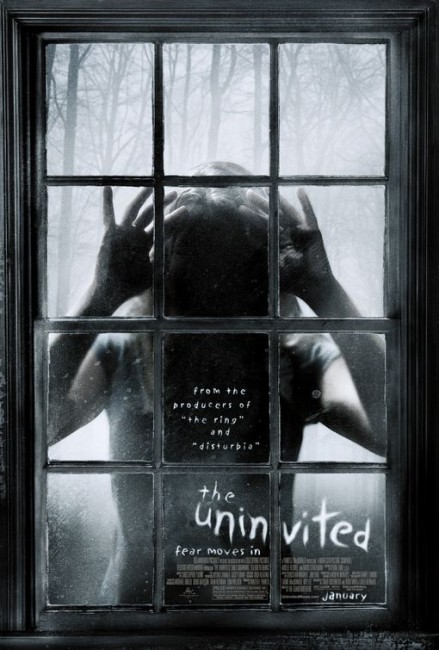 Teenager Anna Ivers is released from a psychiatric institution where she has placed following the death of her mother in a fire. She returns home to New Haven, Maine with her father and rejoins her older teenager sister Alex. Upon returning, Anna discovers that her mother’s nurse Rachael Summers has moved into the house as her father’s girlfriend. Neither Anna nor Alex trusts Rachael. A local boy Matt tries to tell Anna something about what happened on the night of the fire but he is then found drowned in the lake. Anna thinks that what he was trying to tell her is that Rachael started the fire. As she is spooked by ghostly apparitions, Anna tries to get people to believe that Rachael is dangerous and that she is now trying to kill both her and Alex.

The Uninvited is based on the South Korean film A Tale of Two Sisters (2003). This was a ghost story that had moments of undeniably haunted atmosphere but fell apart when it came to its big surprise twist ending, which had clearly been borrowed from The Sixth Sense (1999) and only emerged as contrived and confusing. The Uninvited comes from The Guard Brothers, Charles and Thomas, two British-born siblings who had previously only made three short films.

There are a number of essential differences between A Tale of Two Sisters and The Uninvited. Perhaps the most noticeable is that the relationship between the two girls is different. The point-of-view sister is maybe a couple of years older, however the other sister has been markedly changed. In the original, she was a younger sister, maybe around the age of 8-10; here she has been bumped up to the mid-teens and made into an older sister in the form of Arielle Kebbel. The other major change that comes is that the performance of Elizabeth Banks as the father’s new wife (who becomes just a girlfriend here) has been weakened. The performance that Yeom Jeong-a gave as the stepmother in the original was alarmingly disturbed. Here the character and Elizabeth Banks’s performance have become standard Hollywood thriller femme fatale casting call and there is none of the alarming madness there was in Yeom’s performance in the original.

The one thing The Guard Brothers do is remove much of the haunted atmosphere of the original. In fact, with the emphasis put on the evil stepmother’s plotting, they seem hard pressed to keep treating the film like the ghost story that the original was. There is the feeling here (once the twists are apparent) that what we now have is a standard psycho-thriller that is being twisted out of shape to appear as though it was a ghost story. They have to throw in lame dream sequences with the corpse of Emily Browning’s mother or of Jesse Moss appearing in bed with a twisted back. However, dream sequences like this almost always exist only as an attempt to pump up atmosphere when none exists elsewhere.

Unfortunately, that is the measure of The Uninvited – where the eerie atmosphere of the original has been evened out and turned into a generic modern Hollywood horror film by the numbers where the shocks are processed, where everything is focused around good-looking youth casts and nothing is too scary for the pre-teen audiences. In its Hollywood remake, A Tale of Two Sisters is now only another look-alike modern teen horror film that fades into a bunch of others without any distinguishing notability.

[PLOT SPOILERS] The one plus point about The Uninvited is that the twist ending, which has been changed slightly, is a good deal clearer here than it was in A Tale of Two Sisters. It certainly works effectively when it does arrive (in so far as one does not ask too much about the credibility of it) and is almost in danger of enlivening an otherwise flaccid film. Like their clear source of inspiration The Sixth Sense, A Tale of Two Sisters and The Uninvited are films that tweak with the audience’s point-of-view. Their big surprise hinges on twist endings where the assumptions we made about the central character are abruptly reversed. Both films when you look at them in terms of reverse logic become incredibly contrived in terms of the considerable twists of contrivance that they undergo – both The Sixth Sense and The Uninvited, for instance, give us characters having normal everyday conversations with other people before revealing at the end that the characters were not doing so at all, something that has been contrived solely for the purpose of pulling the wool over our eyes. The Uninvited reminds of High Tension (2003), which likewise had a big contrived twist ending that revealed the killings to be being conducted by a split personality that existed inside the heroine’s head.

The performances from the girls are not too bad. Emily Browning does nicely in the central role. The part is simply one of being a sweetly innocent teenage girl, before our expectations are turned on their head, and she plays this acceptably. Arielle Kebbel, who also went through the Asian horror remake thing once before with The Grudge 2 (2006), comes across with an engagingly lively rebellious sparkle. Elizabeth Banks, who one has admired elsewhere, is unfortunately cast in a role that comes by cliche the entire way.