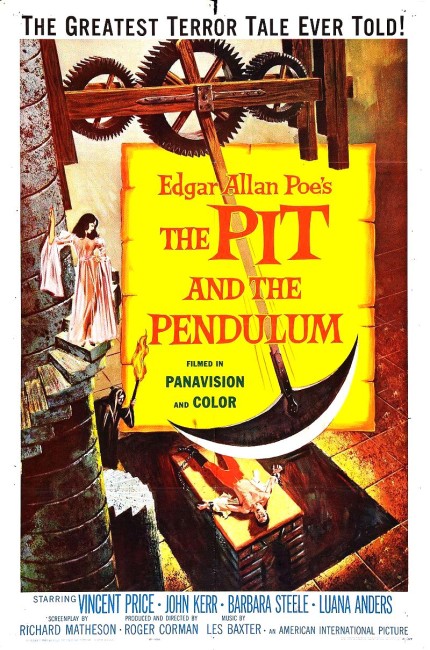 Spain in the year 1546. Upon the news of his sister Elizabeth’s death, Francis Barnard goes to pay respects to her husband, nobleman Nicholas Medina. Once there, Francis decides to stay on, dissatisfied with Medina’s lack of explanations about what happened to Elizabeth. As a child, Medina watched his grandfather, a member of the Spanish Inquisition, torture his mother and uncle to death. He is verging on madness, believing that he buried Elizabeth while she was still alive. Things happen to suggest that Elizabeth may still be alive and/or haunting the castle. Francis must decide whether the hauntings are real or the result of Medina’s tormented mind. When the ghost of Elizabeth reappears, Medina snaps and goes over the edge. Believing that he is now his grandfather, Medina imprisons Francis in a bladed pendulum torture device.

Pit and the Pendulum was the second of Roger Corman’s Edgar Allan Poe adaptations, following The House of Usher (1960). (See below for Roger Corman’s other Edgar Allan Poe titles and films). Corman has reunited most of the creative team behind The House of Usher, including Vincent Price, screenwriter Richard Matheson, photographer Floyd Crosby, production designer Daniel Haller and musician Les Baxter. This time he has also recruited Barbara Steele, who made a striking appearance as the reincarnated witch in Mario Bava’s Black Sunday (1960) around the same time that The House of Usher came out.

Along with The Masque of the Red Death (1964), Pit and the Pendulum is usually the fan favourite among Roger Corman’s Edgar Allan Poe films. However, it does feel overshadowed by the success of The House of Usher, as though Corman and Richard Matheson felt like they were under pressure to make another Usher. The plot draws heavily draws upon The House of Usher – again an ordinary man travels to Vincent Price’s foreboding house in search of a woman who is close to him and has to force his way into the household against the unwelcome he encounters; the house and sanity of its owner is interwound and clearly crumbling; there is talk of the physical presence of the house where the depravities of the past have created a physical evil that affects the inhabitants/descendants in the present day; Vincent Price is cast as a tormented character crushed by the weight of his fears; and there is another premature burial plot. (Not that this is any different from the rest of the films in the Poe series – at times, it seemed as though Roger Corman and Richard Matheson merely shuffled around the themes and gave the characters different names).

Notedly in contrast to the film here, the Edgar Allan Poe short story The Pit and the Pendulum (1850) is a mood piece in which the unnamed narrator finds himself in a cell after sentence by The Inquisition where he is slowly tortured by a descending bladed pendulum. The story consists of little more than the narrator’s fear and terror as the blade scrapes closer to his body over a matter of days. There is little background to the original story, no explanation of how the narrator came to be there, while the end of the story delivers an abrupt deus ex machina salvation that occurs in a single paragraph.

All the rest of the plot that takes place in the film has been invented by Richard Matheson. To such extent, the title of the film feels like a cheat – all that corresponds to the short story has been crammed into about the last twenty minutes of the film; and even there it is largely removed from much of the slim context that Poe gave in the story. There is no torturer in the original, just the narrator being tortured in the cell as the pendulum descends. Much of the story also takes place with the cell in total darkness, which has necessarily been changed here due to the uncinematic problems that this presents.

The Poe story is a masterpiece in terms of conjuring fear, terror and impending dread. Most of the film adaptations of The Pit and the Pendulum make it solely about a unique torture instrument and fail to discover any of the internal psychological torment that is the essence of the story. In fact, the big story twist in Pit and the Pendulum feels as though Corman and Matheson were attempting to graft Poe onto a Les Diaboliques (1955)-styled psycho-thriller. The plot of Les Diaboliques with its elaborately staged contrivations to drive someone mad was just starting to be imitated by the likes of William Castle and Hammer Films. However, incorporated here, such a plot sits somewhat at odds with Poe’s brooding, tortured mood.

On the directorial front, Roger Corman drums up a good deal of thunderous atmosphere. The sets are expectedly lush – the doom-laden labyrinthine house interiors and the massive dungeon are good, the colour and set dressings are so drenched in midnight blue that the colour almost seems to be running down the screen. Despite this, Pit and the Pendulum is often slow moving – it takes three-quarters of the running time before it fully gets going.

Nevertheless, when Corman finally plays his hand in the last quarter, the film works well – Barbara Steele’s emergence from the tomb and pursuit of Vincent Price is good. The pendulum makes for a good climax and the darkly ironic final shot holds a sting. Barbara Steele is certainly an interesting casting choice, her Romantic looks and alabaster beauty hide a nice otherworldly chill – unfortunately, Roger Corman fails to make substantial use of her here in the way that the Italian directors who turned her into a cult figure during the 1960s managed to.