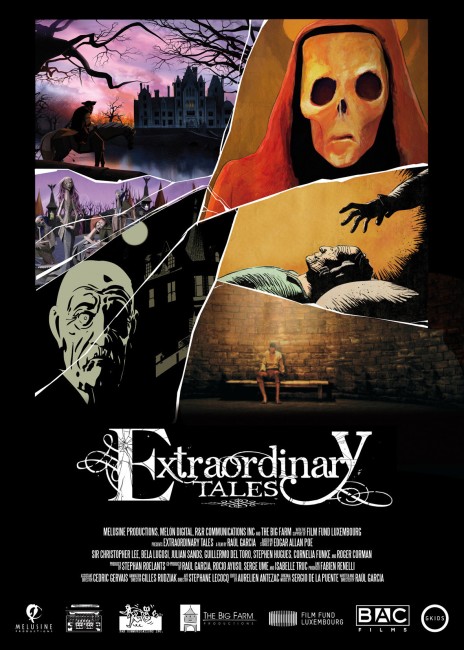 Director/Screenplay – Raul Garcia, Based on the Short Stories The Facts in the Case of M. Valdemar, The Fall of the House of Usher, The Masque of the Red Death, The Pit and the Pendulum and The Tell-Tale Heart by Edgar Allan Poe, Producer – Stephan Roelants, Music – Sergio de la Puente, Animation Supervisor – Gilles Rudziak, Art Direction – Stephane Lecocq. Production Company – Melusine Productions/Melon Digital/R&R Communications/The Big Farm.

Stephen Hughes (The Raven), Cornelia Funke (Death). The Fall of the House of Usher:– Christopher Lee (Narrator). The Tell-Tale Heart:– Bela Lugosi (Narrator). The Facts in the Case of M. Valdemar:– Julian Sands. The Pit and the Pendulum:– Guillermo Del Toro (Narrator). The Masque of the Red Death:– Roger Corman (Prince Prospero).

In a graveyard, the spirit of Edgar Allan Poe in the form of a raven confronts a figure of Death who asks him to reflect on his legacy. The Fall of the House of Usher:– A traveller comes to the large gloomy house of his boyhood friend Roderick Usher and observes Usher’s fraying mental condition brought on by an over-heightening of the senses. Roderick’s sister Madeline dies and is placed in the crypt only for them to then realise they have buried her alive. The Tell-Tale Heart:– A man plots the killing of the old man he tends, obsessed by the man’s hideously deformed eye. He places the body under the floorboards only to afterwards be haunted by the sound of the man’s heart beating. The Facts in the Case of M. Valdemar:– A mesmerist persuades the aging M. Valdemar to allow himself to be hypnotised in the hour before his death. After he expires, Valdemar’s spirit lies imprisoned in his dead body in great torment. The Pit and the Pendulum:– A man is sentenced to imprisonment in the pit by the Spanish Inquisition. Lying in the darkness, he is tormented by a pendulum with a giant blade that slowly swings down towards him. The Masque of the Red Death:– As plague ravages the land, a group of aristocrats gather in a castle only to find that the Red Death walks in their midst.

Edgar Allan Poe (1809-49) has a long history on film. The IMDB lists over 300 films going all the way back to 1908 – although more than a reasonable number of these are short films. In that Moria does not review short films, the problem with those that remain is that Poe – whose stories rarely run to more than a dozen pages – works best at short length than feature-film length. The most well-known Poe adaptations are those produced by Roger Corman in the 1960s usually starring Vincent Price beginning with The House of Usher (1960) – see for others – but here the original stories, which often concern unnamed narrators and have almost no backstory, are considerably padded with other plot material.

Either that or, as many modern updatings do, will retain a single scene from the story and invent something completely different around it. The most faithful Poe adaptations have tended to be those that come in anthology packages, as Extraordinary Tales offers, with the likes of Corman’s Tales of Terror (1962) and Tales of Mystery and Imagination/Spirits of the Dead (1968). (We shall quickly draw our gaze over Two Evil Eyes (1990) and try to ignore it).

Since the 1980s, the Spanish-born Raul Garcia has worked as an animator in the US on films such as Who Framed Roger Rabbit? (1988) and The Land Before Time (1988) and at Disney on Aladdin (1992), The Lion King (1994), Pocahontas (1995), The Hunchback of Notre Dame (1996), Hercules (1997) and Tarzan (1999), among others. Garcia had only directed one feature film before this with the Spanish-made The Missing Lynx (2008). Garcia has been working on these Poe adaptations for more than a decade, while several individual episodes in the film have been released as shorts at various festivals.

Raul Garcia’s approach to adapting Edgar Allan Poe is a simple but effective one. He animates the stories – an approach I do not believe has been taken before unless you count Jan Svankmajer’s Claymation shorts of the 1960s. More crucially, he tells each of the stories at short length and tells the story as written – in almost every case, the story has not been adapted so much as it has one of the various actors conducting an audio reading of it, which the animation is then used to in effect illustrate. Thus what we are getting are the stories told as they should be as opposed to their being padded them out.

As his narrators, Garcia has employed the services of a number of actors and directors who have long been associated with Poe adaptations and horror. There is Roger Corman who directed seven Poe films in the 1960s who voices Prospero in The Masque of the Red Death – which is fitting in that Corman’s version of The Masque of the Red Death (1964) is usually regarded as his best Poe adaptation; there is horror legend Christopher Lee in his penultimate film appearance before his death in 2015, who had previously appeared in the loosely Poe-based The Torture Chamber of Dr Sadism (1967) and The Oblong Box (1969), as well as hosted the tv series Tales of Mystery and Imagination (1995); Julian Sands, an actor who has appeared in a great many horror films, although no Poe adaptations unless you want to count his playing a vampire who was pursued by Poe in Tale of a Vampire (1992). There is also Guillermo Del Toro, director of Hellboy (2004), Pan’s Labyrinth (2006), Crimson Peak (2015) et al who has not yet made a Poe adaptation but has an estimable genre association.

Perhaps the most fascinating name to voice one of the segments is Bela Lugosi who had appeared in several Poe films – Murders in the Rue Morgue (1932), The Black Cat (1934) and The Raven (1935). While Lugosi’s name is prominently touted by the production, it may well serve to remember that Lugosi died in 1956, sixty years before Extraordinary Tales came out. What we have is an audio recording made by Lugosi in 1947 of him narrating The Tell-Tale Heart, which had long been thought lost. (The segment is co-produced by Lugosi’s son Bela G. Lugosi who fought a long legal battle with Universal to retain copyright over the marketing of his father’s image).

The first segment is The Fall of the House of Usher, which benefits greatly from Christopher Lee’s basso voice. Garcia is stuck with how to render the overwhelming melancholia of the original story while not stooping to copycatting the Gothic mood so vividly established by Corman. Thus what we get is The Fall of the House of Usher rendered as stylised CGI, a slightly more rounded version of the papercut animation we have in the wraparound scenes or perhaps a more cartoony version of the characters in Tim Burton’s Corpse Bride (2005). It is interesting seeing the story’s Gothic mood depicted in this manner – the narrator peculiarly comes out looking like Gru from Despicable Me (2010). The story, being the longest of those adapted, is slightly truncated – Madeleine’s return from the grave is a relatively minor affair here, for instance.

The finest of the stories is The Tell-Tale Heart. As acknowledged on the segment’s credits, Garcia has adopted the style of Uruguayan-born comic-book artist Alberto Brecchia. This entire piece is rendered in stark high-contrast patterns of black and white and giant stylised looming shadows. The nearest equivalent you might point to is the striking visuals employed on Sin City (2005) or even more so the fifth segment of the animated horror anthology Fears(s) in the Dark (2007). There is also Bela Lugosi who comes to us through a crackly audio recording, which does not appear to have been digitally cleaned up. It is the unmistakeable heavily-accented tones of Lugosi – you can almost imagine him hunched over, grinning evilly as he imbues every syllable with venom. Lugosi also learned English phonetically and the way he delivers the dialogue, placing emphasis on even the prepositions and transition words, makes the piece seem uniquely alien.

The Facts in the Case of M. Valdemar does an about face in terms of style where here Raul Garcia has designed everything akin to the look of a 1950s comic-book – you keep being reminded of the big colour panels for some of the EC Comics – while the narrator is even made to resemble the likeness of Vincent Price. The segment works effectively with Sands doing a fine job of evoking the sepulchrally haunted tones of Valdemar and the pure dread of the story.

The Pit and the Pendulum is one of the lesser segments. Here Garcia drops the hand-drawn effect we get in The Tell-Tale Heart and M. Valdemar and returns to computer animation. Unfortunately, this is lesser computer animation and the segment comes out resembling the medium-resolution graphics of an early 2000s computer game. The Pit and the Pendulum is probably the most starkly effective of Edgar Allan Poe’s stories and exists as a single piece of psychological torment as the narrator sits imprisoned in darkness. Unfortunately, the rounded computer graphic animation seems a far way from capturing the psychological mood. Guillermo Del Toro’s narration also ends up on the milquetoast side – I mean, is his polite, slightly accented voice really one that suggests a narrator in mortal terror?

The Masque of the Red Death largely eschews narration, apart from Roger Corman delivering only a couple of lines as Prospero. The scenes are computer animated but in a more painterly style than The Pit and the Pendulum. The episode here tends to the slight.

The film is also framed by a series of wraparound where a raven (representing the spirit of Poe) flies about a graveyard talking to a female Death, voiced by none other than German children’s author Cornelia Funke, probably best known here for the adaptation of Inkheart (2008). The animation is made to give the impression that the figures are paper cutouts. These sections are probably also something that the film could have done without – the voice of Poe comes across more as a character from children’s animation and the introspections that make up the bulk of the dialogue seem gloomily narcissistic.