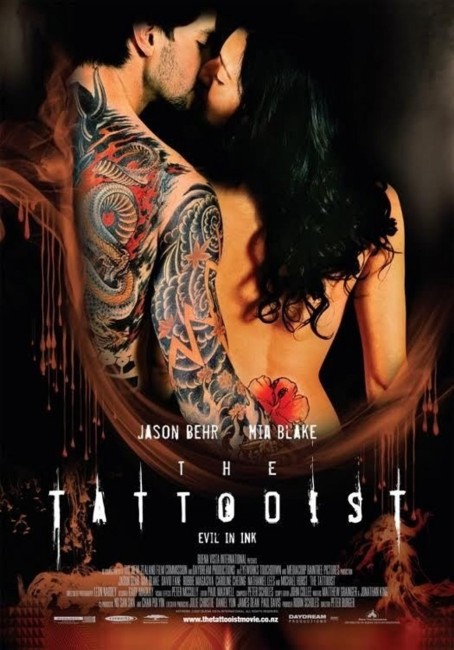 American Jake Sawyer is a tattooist who claims to create tattoos that have healing power, even though he himself does not believe this. At a tattooing exhibition, he meets the lovely Sina and follows her to a tent where traditional Samoan cultural tattooing is on display. He steals a Samoan tattooing tool before he leaves but cuts himself on it outside the building. On inspiration, he catches a flight to Auckland, New Zealand, where he takes a tattooing job with an old friend. Meeting up with Sina, he is drawn into the local Samoan culture where tattoos are regarded as having a power and cultural significance. He becomes involved with Sina and she invites Jake to give her a tattoo. Jake is then horrified to discover that that tattoos he gives grow all over their owner’s bodies and kill them. He comes to realise that an evil spirit is working through him, killing those that he tattoos. Realising that Sina will become the next victim, he races to find a way to stop the menace.

The Tattooist is an entrant into the small and occasionally burgeoning genre of the New Zealand horror film. The film has largely been backed by the Touchdown production company of Julie Christie, known for making a bucketload of NZ tv gameshows. Director Peter Burger is a newcomer who has shot a handful of episodes of local television dramas, while the script comes from Jonathan King, who made his directorial debut a few months earlier with the splatter comedy Black Sheep (2006) and subsequently went onto make Under the Mountain (2009).

The theme of tattooing has had some fascination in horror and genre cinema before. There has been the odd idea of the animate tattoo used occasionally as a gimmick in films like Ninja Scroll (1993) and Elektra (2005). There have been horror treatments such as The X Files episode Never Again (1997), which had Rodney Rowland possessed and driven to kill by a tattoo of Betty Boop, and a similar plot in the subsequent Canadian film Comforting Skin (2011). There was also the uniqueness of the narrative frame in The Illustrated Man (1969) where Rod Steiger’s tattoos come to life to tell stories. There have been a number of films dealing with the dark fascination surrounding tattoos such as the erotic psycho-thriller Tattoo (1981), the German Tattoo (2002) about the killing of people for their tattoos and Perfect Skin (2018) where a woman is imprisoned and her skin used as a canvas by a tattoo artist. Serial killers have also been depicted as tattooed to suggest perverse threat in films like Strangeland (1998) and Red Dragon (2002).

That said, The Tattooist emerges as surely the tamest film to ever venture into the subject of tattooing. Peter Burger’s direction is almost completely lacking in any atmosphere or suspense. Any other director in the horror genre would have lowered the lighting levels and aimed to create a brooding mood surrounding Jason Behr as he sets out on his quest. Almost every horror film will foreshadow its threat in some way – but until the death of the kid in the pool halfway through, there is never a suggestion of any horror element to the film. The most The Tattooist comes towards doing so is about half-a-dozen shots where we think we see shadows or reflections flitting about – and I defy a single person in any audience to emerge having been made to jump by any of these.

Jason Behr’s quest is exceedingly vague – you are not sure if he decides to pack up and head halfway around the world to Auckland because he sees a hot-looking girl as part of a Samoan cultural tattooing exhibition and decides to go after saying no more than half-a-dozen words to her, or that he is in pursuit of more cool designs for his work, or is possibly motivated by desire to return the tattooing tool he stole – all of which are suggested but none ever made clear.

Modern tattooing has been co-opted by a crowd that uses it to either symbolise an individualism – sort of a “it’s my body and I can make it say what the fuck I want” – or by the BDSM, fetish and body-piercing crowd who use it to celebrate a freakishness and kinkiness. However, none of that is present in The Tattooist – Michael Hurst plays a Cockney tattooist with all-over tattoos and the right attitude, while John Bach turns up as an old school tattooed biker, but the rest of the cast seem like no more than the teens/twentysomethings that appear in modern packaged Hollywood horror films.

The other aspect is the use of Samoan ritual tattooing, which the filmmakers appear to have gone out of their way to make culturally correct. To this extent, they received the blessing of the New Zealand Samoan community with cast members and crew even being invited to receive tattoos that symbolically made them a part of local Samoan families. However, while we have no doubt that the details shown are culturally authentic, there is little that we ever learn about Samoan culture and tattooing practices throughout – all that we have is a generic horror film that has written itself around a cultural practice as a novelty gimmick.

The Tattooist is disappointingly predictable on every level. It surely fails the 10-15 minute test that I usually offer any film I watch on tv that I don’t have to write about – if there is nothing of interest that captures one’s attention during that time, I will switch and watch something else. (Indeed, The Tattooist surely even fails a 30 minute test by this rule of thumb). Rather than taking the time to explore any of the rich Samoan cultural background, writers Matthew Grainger and Jonathan King only recycle horror cliches. The hero is another variant on the Man who Dabbles in Forbidden Matters and Unwittingly Unleashes Things They Shouldn’t. There is the cliche borrowed from modern J-horror films like Ring (1998) and Ju-on: The Grudge (2003) of the malevolent crime from the past that has leaked into the present and is killing everyone it touches in its need to be expiated.

The tattooing, makeup effects and visual effects are all performed at a level of accomplished professionalism. There is a nifty scene where we see that John Bach’s tattoo has grown to cover the whole of his body. I also liked the effect that we momentarily see at the climax with Mia Blake crawling across the floor of the shed in pain while in her reflection in a broken mirror we see as a black demon sits atop her back madly tapping away with a tattooing tool.

However, The Tattooist feels like a film that has been made by a committee who have a market-researched idea about what a modern horror film is meant to be – the demographic it is aimed at, the need to import a US actor to appeal to American audiences, the exact censorship level things can be taken to so as not to affect US sales. What The Tattooist crucially feels it needs was someone in the creative process who had the balls to push it out on an edge – in terms of going for horror scenes that were not so safe, that were not the conveyor-belt processed novelty deaths we get at timed intervals in the modern teen horror film.

The film also fails to explore any of Jason Behr’s character obsessions – his willingness to travel halfway around the world for a girl he has barely met, the script’s apparent sanctioning of morally dubious actions like his willingness to conduct a scam offering tattoos that offer cures but do not in reality. He is a passive hero that drifts through the film and seems to have no insight or questioning of these imperatives that the writers have provided him with. Certainly, Jason Behr, whose expressions never travels beyond handsome and vaguely brooding throughout, offers no help here.