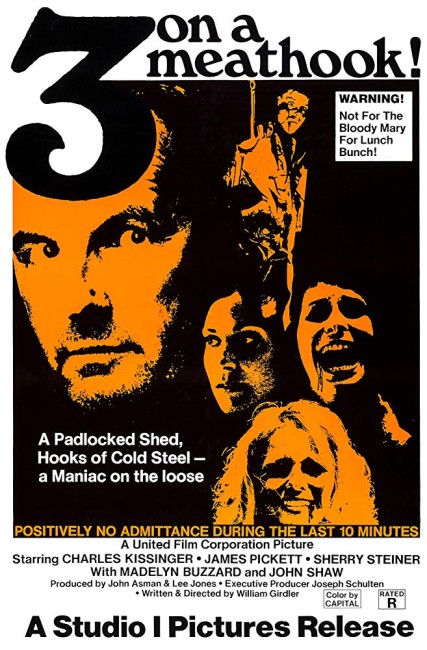 Four girls are on a trip up to the lake when their car breaks down. Billy Townsend comes by and offers to let them stay at his farmhouse for the night. Billy’s Pa disapproves but Billy insists. That night someone kills all of the girls. In the morning, Billy is told by his Pa that he, Billy, was the one who did it, even though Billy has no memory of doing anything. Pa sends Billy away to the city while he cleans up. Billy gets drunk in a bar where he meets Sherry who takes him back to her place. The two realise an attraction, Sherry then accepts Billy’s offer to come up to the farm next weekend and bring her friend Becky.

William Girdler was a minor horror director of the 1970s who made several bad films and one fairly good one. Girdler first appeared with the occult film Asylum of Satan (1972), then made Three on a Meathook. This was followed the exorcism film Abby (1974) and the animals attack films Grizzly (1976) and Day of the Animals (1977). His own moment of greatness was The Manitou (1978) about a reincarnated Native American medicine man. Girdler’s career ended in 1978 when he was killed in a helicopter crash while location scouting for his next film.

If there ever was a genre that modern people called grindhouse (as opposed to a modern label that is thrown at a diverse group of films from the era), Three on a Meathook is a perfect example of it. The title is a great illustration of the lurid sensationalism with which films of this period – usually destined for drive-in theatres as opposed to so-called grindhouses – were sold. To justify the title, we actually do get one brief scene at the end where we see three bodies strung up on meathooks in a shed. The pedant in one does want to point out that this is strictly inaccurate the title should surely be ‘Three Bodies on Meathooks’ as opposed to ‘Three on a Meathook’, which suggests all three are pinned together on the same meathook. Most likely the title was intended as a parody of the classic morality drama Three on a Match (1932).

Three on a Meathook was William Girdler’s second film, released only a few months after Asylum of Satan, so that may well explain a good deal about its technical shortcomings and lack of production polish. The only problem with that assumption is that Girdler never much improved over his career (with the exception of The Manitou). The scenes killing the first four girls that take place shortly into the film are filmed with a crudity. Although there is one novel shot where the camera takes the place of the killer and we see from a first-person viewpoint as the victim is attacked with a hammer and their head pinned to a wall while the severed body falls to the floor.

Thereafter the film drags its feet in a bad way. Girdler spends a lot of time following James Pickett as he goes to town – there are even long scenes where he sits in a bar during which the house band plays an entire song. This is followed by the romance between Pickett and Sherry Steiner, which comes with montage scenes where Girdler tries to get lyrical and shows the two of them swinging on swings and frolicking through a field as friend Madelyn Buzzard keeps jumping up from the grass to surprise them.

The film reaches a twist ending that I can say I saw coming within the first half-hour of the film. [PLOT SPOILERS] Here it is revealed that Pa was the killer all along and had been doing so to feed Billy’s mother whom he keeps locked up in the cellar. This does lead to some improbable notions – that Pa could keep Ma hidden inside the house undetected by James Pickett for years and that she is infected with some kind of medical condition that forces her to be cannibalistic (one cannot help but think that this must require the killing of an awful lot of people somewhere along the line. Either that or she has been kept on a starvation diet).