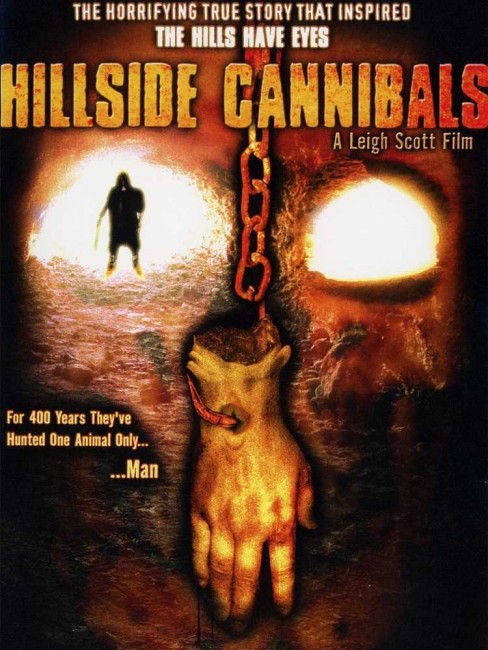 A group of friends go out into the desert. There they are attacked by a degenerate in-bred family of cannibals that live in a cave. Linda makes an escape and tries to get help in order to return and rescue her boyfriend.

The Asylum is a company that has had some success in recent years specialising in low-budget films that come out mimicking the titles of big-budget, high-profile releases in the hopes that people won’t look too closely or notice the difference. It is a strategy they call ‘mockbusters’ and has produced titles such as Snakes on a Train (2006), Transmorphers (2007), Allan Quatermain and the Temple of Skulls (2008), The Day the Earth Stopped (2008), The 18 Year Old Virgin (2009), Paranormal Entity (2009), Battle of Los Angeles (2011), Abraham Lincoln vs. Zombies (2012), Age of the Hobbits (2012), among others. (For a more detailed overview see Mockbusters).

Hillside Cannibals was one of The Asylum’s earliest mockbusters – they had only started making them eight months earlier with their public domain version of War of the Worlds (2005) – although in the eight months between that and Hillside Cannibals , they had already released five other mockbusters. In this case, Hillside Cannibals was intended as a mockbuster version of Alexandre Aja’s The Hills Have Eyes (2006) and was released eighteen days after Aja’s film went into general US release. Aja’s film in return was a remake of Wes Craven’s The Hills Have Eyes (1977).

I have a love/hate affair with the films of Leigh Scott (see below for a full list of these). Most of them are fairly terrible but there is the odd gem that is halfway reasonable – in particular Exorcism: The Possession of Gail Bowers (2005) and Transmorphers (2007), while Frankenstein Reborn (2005) was passable. I have to unequivocally say that Hillside Cannibals is not one of these.

Scott has borrowed the basics of The Hills Have Eyes and has a group of teens in the desert and a crazed in-bred family who all seems to live within the same single canyon and cave. Most of the characters are so blankly written you cannot tell them apart. Although at least, Scott does call the patriarch (which he himself plays) Sawney thus tying to the legend of Sawney Bean, the head of a cannibal clan that lived in a cave in 16th Century Scotland, which apparently served as inspiration to Wes Craven for the original The Hills Have Eyes.

All that we get are a series of scenes set around the same cave and arroyo where a group of filthy degenerates putter around and communicate in grunts in between the faceless teens being chained up and escaping. This dialogueless grunting occurs for long minutes at a time without anything significant happening. Scenes go on and on without the drama actually going anywhere. There is occasionally some cheap gore.