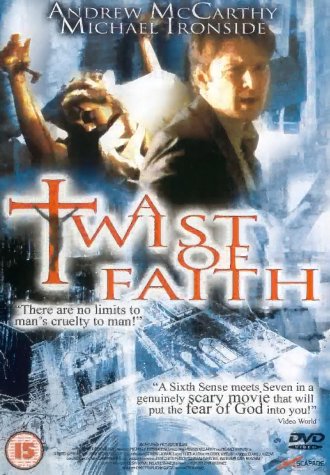 Police detective Henry Smith investigates the murder of a priest who has been nailed to the cross in his own church. This appears to be the activities of serial killer. Soon other bodies turn up, including a murdered prostitute and a murdered sportsman. Each killing has a link to Catholicism in some way. As he investigates further, the atheist Smith is given to question issues of faith.

Of all these Catholic films, A Twist of Faith is surely the slightest. The film wields its Catholic themes onto a serial killer plot. It clearly has ambitions of being another Se7en (1995), substituting Catholic issues of faith for Se7en‘s Seven Deadly Sins motif. In particular, the credits sequence is closely modelled after the similar credits sequence in Se7en but using Catholic iconography.

That said, A Twist of Faith is a routine police procedural that emerges as nothing more than a made-for-tv movie. The story lacks the essential obsessive darkness at its core that Se7en had, while visually it is bland. Crucially, the thriller aspect never holds one compulsively gripped with its twists and turns or in trying to piece together the identity of the killer, which is an unsurprising revelation. The film picks up slightly towards the end when the killer starts playing games with Andrew McCarthy, although this aspect is also cliché.

A Twist of Faith is however a surprisingly devout Catholic film. There is a nicely made contrast at the end during the revelation of the killer’s identity between their trying to defy God and Andrew McCarthy’s atheist detective coming to discover faith. The film fades out on Andrew McCarthy giving his daughter a rosary.

Though Canadian made, A Twist of Faith does the usual thing of pretending to be set in America. Imported in the lead role has been Andrew McCarthy. Since cresting in the mid-1980s as one of the so-called Brat Pack – along with Emilio Estevez, Ally Sheedy, Rob Lowe, Molly Ringwald and Judd Nelson – Andrew McCarthy vanished into obscurity as an adult actor, although he did subsequently return to give a fine performance in the tv series Kingdom Hospital (2004). Here he tries to act and look the part of the tough, hard-boiled detective, but seems far too boyish and fails to convince.