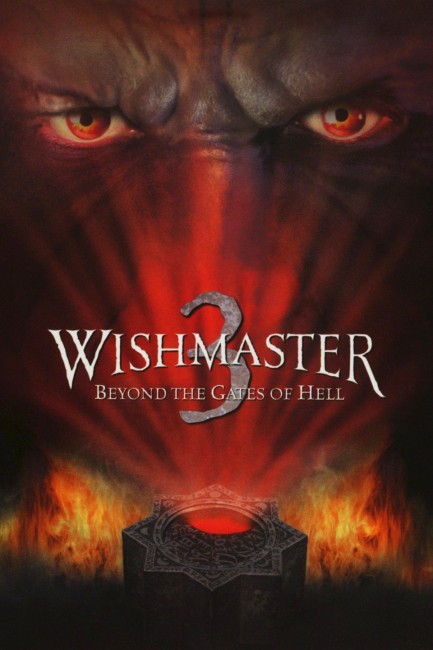 Bright young classics student Diana Collins opens an artefact that contains a red stone and unwittingly unleashes The Djinn. The djinn possesses the body of her professor Barash. Using Barash’s body, it sets about to find Diana in order to make her wish the three wishes it needs her to in order to unleash the rest of its kind. However, she refuses to do so and so the djinn sets out to kill each of her friends, using the wishes it offers them in order to force her hand.

Wishmaster 3: Beyond the Gates of Hell was the third of the films in the Wishmaster franchise. This had begun with the theatrically released Wishmaster (1997) directed by makeup effects man Robert Kurtzman and starring Andrew Divoff in the title role. The series continued with the video-released Wishmaster 2: Evil Never Dies (1999). Wishmaster 3 and the subsequent Wishmaster 4: The Prophecy Fulfilled (2002) were both low-budget video releases shot back-to-back in Canada with John Novak as the djinn and released twelve months apart. The two were made by Canadian director Chris Angel who had previously directed The Fear: Resurrection/The Fear: Halloween Night (1999) and the serial killer thriller A Twist of Faith (1999) but has subsequently disappeared from screens.

Chris Angel’s Wishmaster’s 3 and 4 were the utter dreg ends of the Wishmaster series. Of these, Wishmaster 3 is certainly the worst entry in the whole series. The selling point of the other Wishmaster films was always the novelty ways we would see the djinn turn the wishes around on the wisher. The dazzling makeup effects that director Robert Kurtzman’s effects workshop K.N.B. EFX Group provided for the first Wishmaster have been replaced by cheap work from Sota FX that leaves the novelty despatches severely lacking.

The wishes themselves are incredibly insipid where the film seems too lazy to even make a nominal effort to tie them to what the wisher wishes – Jason Connery desires two women to be in love with him but instead all that happens is that the djinn kills him; a secretary wishes that all her files “would go up in flame” but instead it is she that does; Louisette Geiss wishes she could hide and so for some reason the Wishmaster squeezes her down into the cage of a white lab rat.

Moreover, the Wishmaster’s quest is lame – he is merely setting out to find who Diana is and has to go on a quest around the campus killing her friends to find her identity. The silliest part about Wishmaster 3 though is almost anything involving the angel Michael who emerges as a left-field plot element, appearing from out of a stained glass window to possess Tobias Mehler and then engages in a wrestling match with the djinn, wielding a sword and throwing around pews. There is an equally arbitrary wrap up of the plot where AJ. Cook’s heroine saves the day by jumping from the roof and impaling herself on the angel’s sword.

Clearly, Andrew Divoff had no interest in coming back to repeat his role and so the Chris Angel Wishmaster films came up with the ingenious solution of having John Novak’s djinn steal somebody else’s face to wear in each film. In this instance, he becomes Jason Connery. Jason is the son of Sean Connery who peaked in the 1980s playing the second incarnation of tv’s Robin of Sherwood (1983-6) but has since faded away to a string of B movie roles.