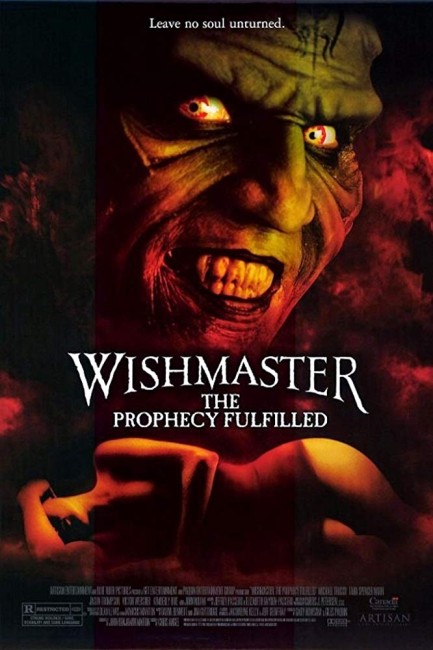 Lisa Burnley’s boyfriend Sam Layton has had his legs paralysed in an accident. Sam is now embittered and spends much time drinking, which has strained their relationship. Their attorney Stephen Verdel has been processing a lawsuit on their behalf. Verdel now tells Lisa that he is attracted to her and presents her with an ornamented box as gift. She accidentally drops the box, causing a red gemstone to fall out from inside. After she leaves, the djinn emerges from the gemstone. It grants Verdel a wish, which it then uses to kill him and steal his body. As Verdel, the djinn sets about trying to get Lisa to make the three wishes it needs in order to allow its kind to roam free on Earth. For the first two, Lisa wishes that the legal case could be settled and that Sam could regain the use of his legs. However, when the djinn, all the while trying to seduce Lisa away from Sam, pushes her to make the third wish, she wishes that she could love him for his true self. Having made the third wish, the djinn is now placed in the difficult position of being unable to grant it until she discovers that she can love his true form.

Wishmaster: The Prophecy Fulfilled was the fourth and so far last of the Wishmaster films. The series began with Wishmaster (1997) directed by makeup effects man Robert Kurtzman. Wishmaster was principally a vehicle for Kurtzman’s outlandish makeup effects and came predicated on the idea of turning the genie/djinn notion, usually used in fantasy films, into a horror concept wherein the djinn (Andrew Divoff) uses each wish it offers to kill the wisher in bizarre ways. There was a sequel, Wishmaster 2: Evil Never Dies (1999), which also featured Andrew Divoff as the djinn.

This was by followed by two further sequels, Wishmaster 3: Beyond the Gates of Hell/Wishmaster III: Devilstone (2001) and Wishmaster: The Prophecy Fulfilled here, both of which were shot back-to-back on the cheap in Canada by director Chris Angel featuring John Novak as the djinn. Both of these get around the absence of Andrew Divoff with a clever device that has the djinn stealing the face of another person to wear throughout.

While Robert Kurtzman’s effects work gave an imaginative kick to an otherwise formulaic plot in the first Wishmaster, by the time of Wishmaster: The Prophecy Fulfilled, the series has become cheap and tatty. Kurtzman’s outlandish creations have been replaced by cheesy makeup effects produced by a discount studio – a particularly unconvincing set-piece with businessman (played by screenwriter John Benjamin Martin) ripping out his own tongue, slicing off his nose and jabbing a knife into his cheek; and especially the climactic scenes with djinns popping through the walls of a collapsing house.

For that matter, the wishes offered up in Wishmaster: The Prophecy Fulfilled have been conceived with little imagination. When Kimberly Huie wishes that she could be “fucked to death”, all that happens is we see her suspended halfway up a wall. Some of these are ridiculous – like where barman Ernesto Griffith wishes that he could be a pimple on a stripper’s ass. The film’s single novel idea – although one that is only dealt with in unimaginative ways – is where the prime wisher makes a wish that she could love the djinn “for who he truly is” and we then see with sporadic amusement images of the djinn in love.

More so than it is a Wishmaster film, The Prophecy Fulfilled often feels like it is about a troubled relationship where the woman is drawn off into having a potential affair. The actors in the roles of the troubled couple – Tara Spencer-Nairn and Jason Thompson – are blandly cast. These are parts that seem more well-suited to a couple in their thirties, not people around the average age of 22. On the other hand, Michael Trucco, later a regular on tv’s Battlestar Galactica (2003-9), is well cast in the part of the Wishmaster-possessed lawyer where he does a fine job of appearing smooth, charming and totally ruthless.

Director Chris Angel is better known in the industry as an editor – these days he works as an editor for dvd extras. Outside of these two Wishmaster entries, he made two other genre films as director with The Fear: Resurrection (1999) and the Catholic serial killer film A Twist of Faith/Beyond Redemption (1999). With the exception of the non-genre comedy This is Not a Test (2008), Angel has yet to direct any other films.