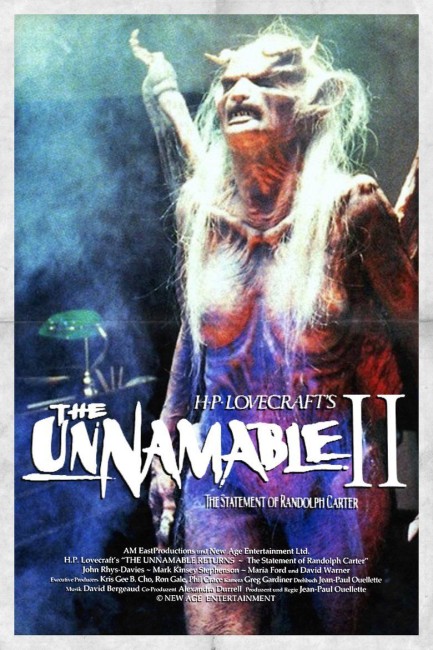 aka The Unnamable Returns

After the massacre at the Winthrop mansion, Randolph Carter returns with his professor to investigate the tunnels beneath the house. They find the demon-possessed Alyda Winthrop and inject her with insulin, which fools the demon into believing something is wrong with her body and exiting. Carter is then faced with having to take care of a 200-year-old girl who is innocent in the ways of the 20th Century. At the same time, Carter also finds himself falling in love with Alyda. However, the demon follows them back to Carter’s dormitory, killing all in its way, as it tries to reunite with Alyda.

Jean-Paul Ouellette had minor success with the low-budget H.P. Lovecraft adaptation The Unnamable (1988). While The Unnamable was not a particularly great film, it was obviously enough of a success for someone to give Ouellette a bigger budget to make Unnamable II: The Statement of Randolph Carter.

With The Statement of Randolph Carter, Jean-Paul Oullette has only been given a B-minus budget, although enough for him to hire one of the lesser Hollywood effects firms to create some okay creature effects and to hire a couple of name stars – David Warner, who has a single scene in an eminently forgettable role as the university dean, and John Rhys-Davies, who adds some much needed dignity to the show before being killed off about a third of the way in.

The rest of The Unnamable II is not very good. It has a potentially interesting idea wherein a demon is exorcised from a woman and spends the rest of the time trying to reunite with her. However, Jean-Paul Ouellette fails to understand matters like plot and this only proves to be a pretext to have the demon killing off various people. The creature effects are the best thing about the film.

With its corny dialogue and portentous seriousness, the exercise sits just below the threshold of becoming outrightly laughable. The film drags in quantum physics to try to justify what is going on and makes a thorough mangle of it – “It’s Quantum Physics,” says someone as Be All explanation at one point. “But that’s only a theory.” The bugged-out intensity of Mark Kinsey Stephenson (the only returnee from Unnamable I)’s preppy performance is rather funny – you keep thinking that in the real world someone like this who projected such wimpish body language yet acted so assertively and kept ordering people around would soon get a rude awakening. So far nobody has given Jean-Paul Oullette money to make another film.