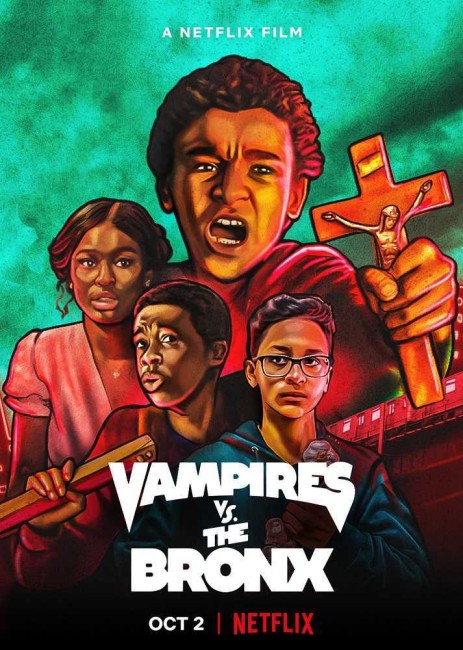 Miguel Martinez, Bobby Carter and Luis Acosta are three best friends growing up in The Bronx. Miguel notices that real estate around the area is being bought up by Murnau Properties where local residents are being offered sizeable settlements to relocate. Miguel is pursued by the gangbanger Slim when he sees a mystery figure appear, attack Slim and then drink his blood while floating up into the air. The group realise they are dealing with vampires. They discover that Murnau Properties is a front for the vampires who are buying up properties so that they can build a nest and colonise The Bronx. The boys are ridiculed when they try to alert people. The boys have stolen an all-important key from the vampires. The vampires then employ the gangbangers to hurry up the process of removing people while eliminating the boys.

Vampires vs. The Bronx was a feature-length directorial debut for Oz Rodriguez who had previously made a whole heap of comedy shorts in between directing episodes of various comedy tv shows, in particular for Saturday Night Live (1975- ).

Vampires vs. The Bronx is essentially an American version of Attack the Block (2011). That film’s invading aliens have been substituted by invading vampires but there is the same essential plot of a group of youths in a poor neighbourhood defending the block against an outside threat, in so doing uniting the disparate forces of the neighbourhood to fight the menace.

The film adapts these essentials in ways that are unique to its title locale. It has the feel of having been made by people who really lived in the Bronx all their lives (although a quick search reveals that director Oz Rodriguez grew up in California and his co-writer Blaise Hemingway in Massachusetts). It is set among the principally Black and Latino racial melting pot of the neighbourhood, amid the central fixtures of the area including neighbourhood bodegas, churches, gangs, drug dealers and street festivals. (The film does have the dubious caricature where the only white people we see are the vampires and their familiar).

Vampires vs. The Bronx doesn’t do anything to attempt to reinvent the Vampire Film as a number of efforts in the post-Twilight (2008) era have done with highly creative results – see the likes of Stake Land (2010), A Girl Walks Alone at Night (2014) and The Transfiguration (2016). It does do what seems to be the requisite thing for a number of vampire films of the 2000s and beyond and makes a good many in-references to the genre’s history. The vampire real estate company is called Murnau Properties after F.W. Murnau, the director of what is considered the first vampire film Nosferatu (1922), while the logo for the company is a relief of the known existing portrait of Vlad the Impaler. Furthermore, Shea Whigham’s character is named Polidori after John Polidori, Lord Byron’s physician, who wrote the first ever vampire story The Vampyre (1819). Gregory Diaz IV is also seen sitting reading Stephen King’s Salem’s Lot (1977). Perhaps the most amusing scene is where the boys watch Blade (1998) trying to get inspiration for hunting the vampires.

I enjoyed Vampires vs. The Bronx. It is fun, gets great mileage out of its milieu and characters and generates a rousing tale of kids employing their ingenuity to take on the big evil, all with generous amounts of humour, threat and struggle for the kids to be taken seriously. Rather than any of Hollywood’s often painfully awkward efforts to grapple with diversity, this is simply a story about a group of people in a neighbourhood telling their own story and adapting familiar genre tropes to give them their own unique colour and spin.