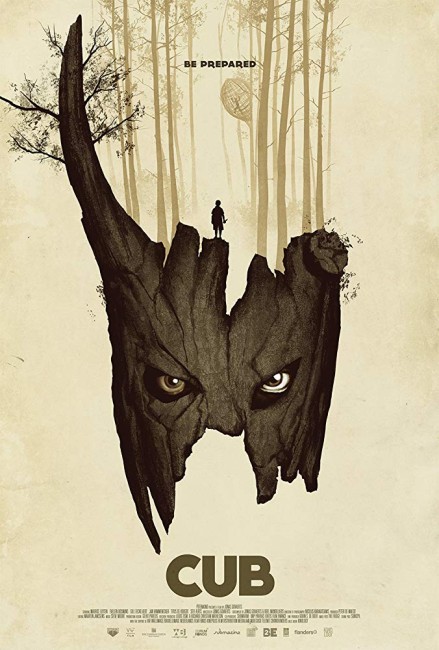 A troupe of Boy Scout leave Antwerp and head out into the nearby woods on a camping expedition. Arriving at the campsite they have rented, they find two aggressive French layabouts there and leave after a scuffle breaks out between them and one of the troupe leaders. They drive deeper into the woods and set up camp not far from an abandoned factory. The leaders have teased the boys with the story of the woods being haunted by a werewolf named Kai. As young Sam ventures off on his own, he encounters a feral boy and believes that this is Kai. He cautiously befriends Kai, however Kai and the hunter who acts as his father figure have set traps to kill the scouts.

Welp/Cub was a debut feature film from Belgian director Jonas Govaerts. Govaerts was previously a guitarist with the Belgian band The Hickey Underworld but left due to hearing loss. In the meantime, Govaerts had directed a number of horror short films and made his full-length debut here. Welp is the Dutch word for Cub but for some reason it is more commonly referred to in English by the Dutch name.

Welp/Cub is essentially a Belgian Backwoods Brutality film, named after the genre that includes films such as Deliverance (1972), The Last House on the Left (1972) and The Texas Chain Saw Massacre (1974), featuring people from the city running afoul and being tortured/killed by people in the backwoods who live in a state of near-barbarism. Belgium has previously produced an entry in the genre with Fabrice du Welz’s supremely weird The Ordeal (2003).

Certainly, Jonas Govaerts spins things in ways that are completely different to what you expect of the Backwoods Brutality genre. The appearances of the child covered in mud and wearing a horned mask with one of the horns broken (who is listed on the credits only as Kai, the name given to the mythical werewolf that the scout leaders make up to scare the boys) is unearthly. It makes you think of something like fellow Fabrice du Welz’s Vinyan (2008). The child is sometimes accompanied by an adult companion, a seeming hunter. No explanation is ever offered for who these figures are, although the ranger we meet early on does hint that the closure of the nearby factory has caused some of the locals to go wild.

When the film emerges into full horror in its latter third, Jonas Govaerts delivers some solid and effective punches – Evelin Bosmans caught in a trap in a tree; the hunter driving the truck over a tentful of the boys; and a particularly effective ending as Evelin Bosmans is held prisoner in the hunter’s lair and the two boys fight over her.