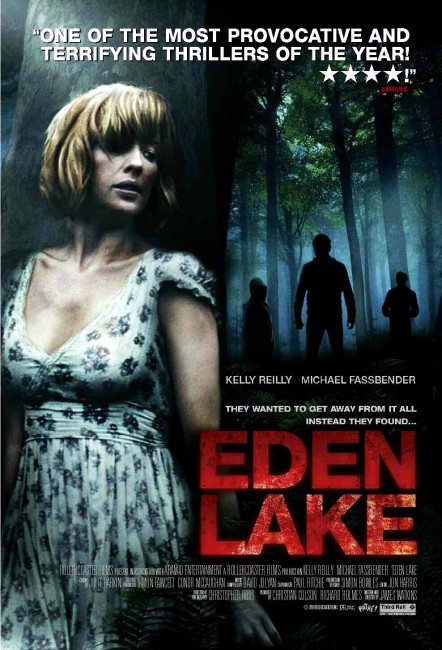 Steve takes his girlfriend Jenny away from the city for the weekend to go camping at his favourite spot at Eden Lake where he is intending to propose to her. On the beach, their peace and quiet is disturbed by a group of youths with a loud ghetto blaster. When Steve asks them to turn it down, they taunt and ridicule him. Afterwards, he finds that they have punctured his car tire. Returning to the beach the next day, Steve and Jenny come back from a swim to find that the youths have stolen their car. They come across the group but Steve’s confrontation with them ends in him accidentally stabbing the leader Brett’s dog. Brett swears vengeance and starts hunting the two of them through the woods. In trying to get away in the car, they crash and Steve is injured. He urges Jenny to run to the village but the next morning she finds the youths with Steve tied up where Brett makes them all take turns stabbing him with a knife. Spotted, the group begin pursuing her with the intent of killing her.

Eden Lake was one version that emerged from England to quite a reasonable degree of acclaim. It was a directorial debut for James Watkins who had previously written the scripts for a number of other horror films – My Little Eye (2002), Gone (2006) and The Descent Part 2 (2009). On the basis of Eden Lake, Watkins was subsequently hired to make the ghost story The Woman in Black (2012) for the revived Hammer Films.

The other fascinating face that Eden Lake features is Michael Fassbender as the leading male (although not the principal character of the film) before he went onto international A-list status and prominent roles in Inglourious Basterds (2009), A Dangerous Method (2011), Prometheus (2012), The Counselor (2013) and as the young Magneto in the X-Men films, among others.

One of the complaints you could make about the aforementioned European Backwoods Brutality films is that they come from countries where the idea of a hostile divide between city slickers and backwoods hillbillies is not as sharp a one as it is in a country of such large expanse as the United States. Eden Lake strains to make the case for England. As soon as Kelly Reilly and Michael Fassbender have left the confines of the city, they are surrounded by uncouth provincial characters everywhere they turn – children racing across their path on bicycles as they go to turn at the lights, another car rudely forcing its way into a parking spot ahead of them, the barman in the country pub ignoring Michael Fassbender, the mother who slaps her child in public, the sounds of raucous partying coming in through the window of their hotel room.

When we arrive at the lake (which is in actuality located only a few minutes from Pinewood Studio, which is thirty minutes from London, hardly the forgotten backwater of the UK the film paints it as), there is, not unlike the excellent Australian Nature’s Revenge film Long Weekend (1978), the constant imagery of the despoliation of nature by the uncaring locals – Kelly Reilly and Michael Fassbender’s idyll in the sun interrupted by a blaring ghetto blaster, the dog shitting in the sand or barking unleashed in Kelly Reilly’s face, the kids smashing the glass jars of the boy (James Gandhi) who collects bugs, and the surly taunts they give Michael Fassbender when he goes to ask them to turn the noise down.

Once he gets to the heart of the film, James Watkins gets his teeth into the audience and rarely lets up on the tension until right at the end. The characters are tight, well-played and certainly given much more roundedness than they are in the usual Backwoods Brutality film. Watkins gets a particularly gruelling tension out of the scene where ringleader Jack O’Connell browbeats all of the other kids into taking turns stabbing a bound Michael Fassbender.

The film reaches an unsettling end [PLOT SPOILERS]. Here Kelly Reilly makes it to the village only to discover that the people who take her in are the parents of ringleader Jack O’Connell. Then comes the disturbing moment where she realises that the brutal assault that she has undergone is suddenly being spun to show her as a murderer of one of the children. The end of the film and her eventual fate has nothing good to say about rural English life.