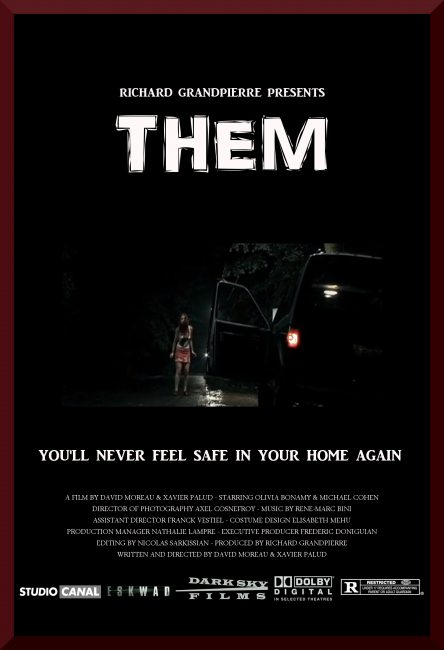 2002. Clementine Sauveur and Lucas Meclev are a French couple who are living in Snagov, Romania, where she is teaching French at a local college. One night they are woken by noises outside their home. Investigating, they are plunged into a nightmare where they are pursued and brutally assaulted by unseen attackers.

Them makes the claim to be based on a true story, although one has been unable to find any English-language sources that give details about the incident in question. One suspects that the filmmakers are doing something akin to what The Texas Chain Saw Massacre did, which claimed to be based on fact but had so little resemblance to actual incidents that it had to be considered an almost complete fiction. Even assuming that Them has some basis in fact it must surely be akin to Open Water (2003), which claimed to be based on the true life disappearance of a couple who were abandoned in a sea of sharks. In that both Open Water and Them tell the events that supposedly happened from the perspective of the couple that were killed – ie. failed to survive the events to tell their story – then the bulk of what happens in either film surely has to be entirely speculative. Them has a number of similarities to the Backwoods Brutality film The Evictors (1979) about a couple who rent a farmhouse in rural Louisiana and come under attack by mysterious strangers, which also claimed to be based on a true story.

Them does not concern itself too much with the true story label and just gets down to conducting a tense and effective scare show. The film does not even concern itself with supporting characters, background characterisation of the couple or explanations about why things are happening – anything other than a prologue where a Romanian mother and daughter (Adriana Moca and Maria Roman) are attacked on the roadside.

Them was shot on digital video and the camerawork is frequently handheld, which offers a degree of verite realism, getting in with the couple as they are pursued through the house and woods by their never-seen attackers. Directors David Moreau and Xavier Palud achieve a reasonable tension in these scenes. The actors playing the couple, Olivia Bonamy and Michael Cohen, play with a warm and naturalistic rapport.

There’s a kicker of a finale [PLOT SPOILERS] where Olivia Bonamy is pursued through the catacombs near the house and races through a tunnel towards the light only to find that escape is blocked by an impenetrable iron grille. The camera then cuts to the other side and pulls back to reveal her hand reaching out of a culvert on the side of a road. A vehicle comes past and when it has gone the hand has vanished. The final coda the film goes out on with the attackers emerging out of the forest and revealed to be children who then climb onto a waiting school bus and head off is also disturbing.

On the back of the success of Them, their debut feature, directors David Moreau and Xavier Palud, were employed to conduct the Hollywood remake of The Eye (2008), while Xavier Palud returned to France for the thriller The Blind Man (2012) and Moreau went on to make the Last People on Earth film Alone (2017).

Them should not be confused with the classic giant atomic ants film also entitled Them! (1954) or the alien invasion tv movie Them (1996).