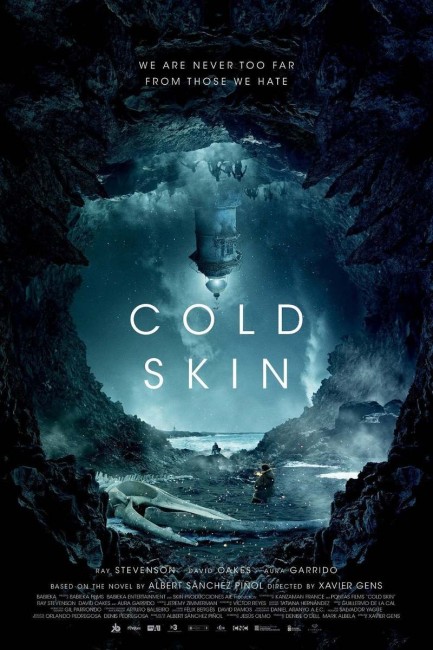 1914. A young man journeys to a remote island in the North Atlantic to take up a twelve-month long position where his duty is to record the weather patterns. The only other person on the island is the misanthropic lighthouse keeper Gruner. As the man settles into the house where he is quartered, he discovers that at night the house is surrounded by humanoid creatures that emerge from the sea and viciously try to break in. In his trying to fight them off, the house is burned down. Gruner grants him refuge at the lighthouse. There the man finds that Gruner keeps one of the female creatures as a pet, frequently abusing it, while also using it for his sexual needs. By night, the two men fight a fierce battle, killing the Toads, as Gruner calls them, as they attempt to scale the walls and break into the lighthouse.

French director Xavier Gens first emerged in 2007 with two films – the gore-drenched Backwoods Brutality effort Frontiers(s) (2007) and the English-language videogame adaptation Hitman (2007). He followed these with the sensational nuclear fallout shelter drama The Divide (2011), the X is for XXL segment of The ABCs of Death (2012) and the exorcism film The Crucifixion (2017). He has also produced Cell (2016).

Xavier Gens comes to Cold Skin with principally Spanish backing. The idea for the film and remote setting is immediately something unique. Although the film is based on a 2002 novel by Spanish-language author Alberto Sanchez Piñol, you are reminded of H.P. Lovecraft stories like Dagon (1917) and The Shadow Over Innsmouth (1931). The scenes with the people at siege in the lighthouse as swarms of creatures mass up from below and try to attack them reminded me a good deal of the climactic scenes of Hemoglobin/Bleeders (1996).

Of course the one film that you cannot help but draw association to is Guillermo Del Toro’s The Shape of Water (2017) – indeed, both Shape and Cold Skin were even released only a month apart. Both films feature the idea of humans engaged in sexual relationship with humanoid amphibians. That said, Del Toro takes a much more adventurous outlook and depicts the human-amphibian relationship as a romantic one and symbolically places the couple alongside a group of ethnic and sexual outsiders of the day as they defy mainstream convention.

In comparison, Cold Skin is much more conservative – hero David Oakes regards the notion of Ray Stevenson’s ruttings with the amphibian with disgust, although does express a distaste for Stevenson’s harsh treatment of the fish girl, while there is the slight but unfulfilled suggestion of attraction between Oakes and her in a couple of scenes. That said, both men stand firmly on the side of humanity and are engaged in a to the death battle to exterminate the creatures. If this played out as The Shape of Water, Sally Hawkins would be observing Michael Shannon having his way with the mercreature with distaste and then the two of them would settle their difference and pick up guns to kill off the rest of its species.

Xavier Gens can sometimes be hit and miss. I didn’t particularly care for either Hitman or The Crucifixion. On the other hand, he was really on the ball with the grim and psychologically torturous The Divide. I am happy to report that he seems to be back on game with Cold Skin. The whole film has been crafted as a work of bare isolation with only two speaking characters and confined to two building on a gnarled and desolate stretch of black rock – location shooting in Lanzarote and Iceland – for the duration. There is no particular explanation ever offered for who the amphibians are and where they came from apart from the general explain-all of ‘evolution’. The bulk of the film takes place during the nightly siege as the amphibians emerge from the ocean below and mount an assault on the lighthouse as the two men pick them off with guns and whatever weapons the two can improvise. The entirety of the film is built around the fierceness of their battle.

(Nominee for Best Director (Xavier Gens) at this site’s Best of 2017 Awards).