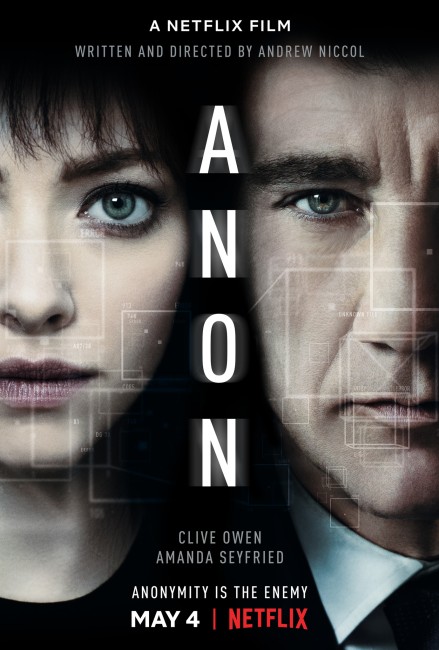 In the future, privacy is a concept of the past. Via implants in the eye, all memories are recorded and can be shared. Sal Frieland is a detective whose business is accessing and scanning people’s memories for evidence of various crimes. He is puzzled when he passes a girl in the street to find that she has no identity display. When he tries to share what he saw with a colleague later, he finds that the memory file of her has been erased. He is baffled during one case when he finds that a memory file he tries to access is listed as classified. In investigating, he is shocked to learn that a victim has been murdered where the killer was able to hack into the victim’s eyes and make them see themselves be killed through the killer’s eyes and that all trace of the killer has been erased. In investigating, there appears to be a string of identical murders. Baffled as to how to trace the killer, Sal decides the only way to do so is by creating an artificial set of memory records for himself as a broker and then advertising for a hacker to erase the memory of an indiscretion with a hooker. After some searching, he meets the girl from the street. By tracing her proxies afterwards, they are able to covertly observe through her eyes, although find that she is careful not to look at surroundings and give herself away. The only option is for Sal to apply for her services again, during the course of which he ends up in bed with her. However, in accessing his memories to create replacements for the erased time, she discovers that he is a detective. She flees and then begins to turn his life upside down, erasing his most precious memories and leaving him unable to tell whether what he is seeing is reality or illusion.

Andrew Niccol has become a director-writer whose cool and smartly intelligent work has pegged him as one of the names always worth watching out for. Niccol first appeared with the exceptional double slam of the dystopian future film Gattaca (1997) and the script for The Truman Show (1998). These showed the former New Zealander as a director-writer of enormous promise. This was not quite fulfilled in Niccol’s next directorial outing, the rather slight S1m0ne (2002) about a virtual Hollywood actress and the story for one of Steven Spielberg’s weakest films The Terminal (2004). However, Niccol sprang back to form with the non-genre Lord of War (2005), a darkly acerbic work about the arms trade, and a further dystopian future work In Time (2011), followed by the adaptation of Stephenie Meyer’s The Host (2013) about alien body snatchers and the non-genre Good Kill (2014) about modern drone warfare.

Andrew Niccol frequently likes to create ‘what if’ dystopias and futures – Gattaca comes with the premise of “what if there was a future where everybody was genetically perfected”, In Time with the concept of “what if there was a future where time literally is money?”. With Anon, Niccol spins out another ‘what if’ scenario imagining a future where our current world of mass surveillance by the NSA and internet companies like Google and Facebook is taken to a logical extreme and then postulates how hackers would work and someone could maintain total anonymity in such a world.

The world that Niccol creates is never more fascinating than in the opening scenes where we see Clive Owen walking through the streets. Here Niccol expands upon current ideas about augmented reality to imagine a world where Owen sees everybody walking about with personal id tags hovering over their heads, where commercial items come with little pop-ups offering detail and information and, somewhat akin to the world in Blade Runner (1982), advertising has been virtually superimposed over buildings.

We also see Clive Owen going about his job as a detective searching for the last memory records of a teen who has committed suicide by a father searching for his whereabouts or a rich woman (Niccol’s wife Rachel Roberts) who wants to check the memory records of the maid in her room she thinks stole her missing jewellery. And then come the fascinating scenes invisibly hacking into Amanda Seyfried’s optics and trying to get traces of where she is to arrest her only to realise that she is avoiding being tracked by never looking at her surroundings, or the scenes where Clive Owen creates a fake identity and she hacks in to delete and replace his memories. It adds up to one of the most fascinating and original depictions of a future that I have seen in a science-fiction film in some time.

You do have one or two likelihood questions about the world created. Nobody seems to use passwords to protect their memories and everybody’s data is on display for all to see. While the film does show some people wanting memories erased, it seems astonishingly easy for police and the hackers to access people’s heads. What would have helped is maybe a scene that indicated people had to get through privacy walls and/or obtain warrants to do so.

The other thing that left me confused was the differentiation between human memory and the visual backups that everyone has. Are these one and the same? When Clive Owen reacts with horror to the fact that Amanda Seyfried has deleted records of his son, does that also mean she has deleted his actual memories or just the visual images? If Amanda deletes his memory record of her, how is he able to say he wants to see her again or indeed recognise she is the same person he saw in the street? There seems some differentiation being made between memory and recording but the film fails to create a clear distinction between the two. The twist that comes near the end where [PLOT SPOILERS] Amanda Seyfred reveals she is not the killer needed more development and the revelation of the identity of the killer comes far too hurriedly. Otherwise though, this is exceptional writing.

All of Andrew Niccol’s science-fiction films have a unique almost homogenous design scheme – coolly disquiet interiors, men outfitted in 1950s suits and fedoras, slightly modified classic cars, muted and/or shadowless lighting schemes. Niccol uses the same here but the motif he puts on Anon is to create a world that exists almost entirely in desaturated greys – Clive Owen wears grey suits, the walls and halls of the police station are made of massive blocks of stone, the streets seem predominantly grey in their shadings. Clive Owen and the actors frequently shot dwarfed against bare spaces of walls, sitting at massive tables or outlined against windows looking out on the city.

(Winner in this site’s Top 10 Films of 2018 list. Winner for Best Original Screenplay, Nominee for Best Director (Andrew Niccol) and Best Cinematography at this site’s Best of 2018 Awards).