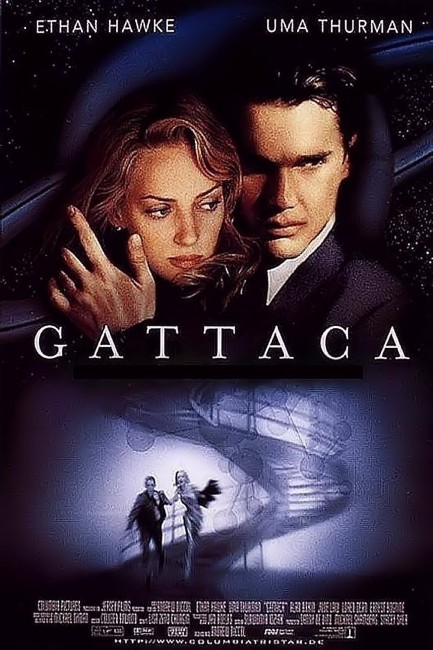 In the future, genetic engineering has allowed the elimination of hereditary impurities such as myopia, baldness and heart disease. Vincent Freeman is a rare child who has been born naturally and as such is condemned to a social underclass, never able to attain any position or job in society above the most menial labour. Driven by the dream of boarding a space mission, Vincent enlists in a black market scheme whereby he impersonates Jerome Morrow who is genetically acceptable but has been left crippled in an accident. Posing as Jerome, Vincent gets around the frequent genetic security tests by altering his appearance and using hidden urine and blood samples to pass by checks. He is accepted for training. However, a murder inside the space institute threatens Vincent’s ruse.

Gattaca‘s position on the genetic engineering debate is a conservative one. This is surely made clear from the poster for the film, which bears the legend “There is no gene for the human spirit”. In opting for such, Gattaca buys into the black-and-white straw arguments that the conservative side of the genetics debate has eked out for itself – that any of the potential gains to be made from genetic engineering – the elimination of inherited diseases – is outweighed by an elusive and undefined quality known as the human spirit. In any other name, the old credo: “If man was meant to fly he’d have been born with wings”.

In Gattaca‘s favour, it is not about the arguments for and against genetic engineering as much as it is a “What If?” portrait of a society where class position and status is based on one’s genes. Once the plot settles in, Gattaca turns out to be a surprisingly worthwhile film. The story is tight and wound into an impressive thriller. The dialogue is equally sharply polished – usually in dystopias you expect the script to merely offer up ideological speeches. Considerable ingenuity has been placed into thinking out how law enforcement might work in such a society based on genetic class and even more into thinking out the steps a criminal might have to go to get around such.

Director Andrew Niccol crafts it all with a cool, sophisticated elegance. Gattaca was made on a slim budget and Niccol creates an effectively futuristic vision simply by shooting modern building interiors in a shadowless light. All the colour has been washed out of the frame so that the film appears to be shot in a virtual sepia-tone. The effect creates a future that conveys a cool sophistication with a subtle air of disquiet.

Andrew Niccol is shaping up as a highly promising genre talent. He next went onto write the script for the excellent The Truman Show (1998) about a man who discovers his entire life is set up for tv cameras. Niccol’s second directorial outing was S1m0ne (2002), a comedy about a virtual Hollywood actress, although this failed to realise the possibilities Niccol showed in either Gattaca or The Truman Show. However, Niccol bounced back with his third directorial outing Lord of War (2005), a bitingly black comedy about the international arms trade. He has also made a similar dystopian film with the also excellent In Time (2011); the adaptation of Stephenie Meyer’s The Host (2013) about alien body snatchers; Good Kill (2014) about modern drone warfare; and Anon (2018) set in a mass-surveillance future.