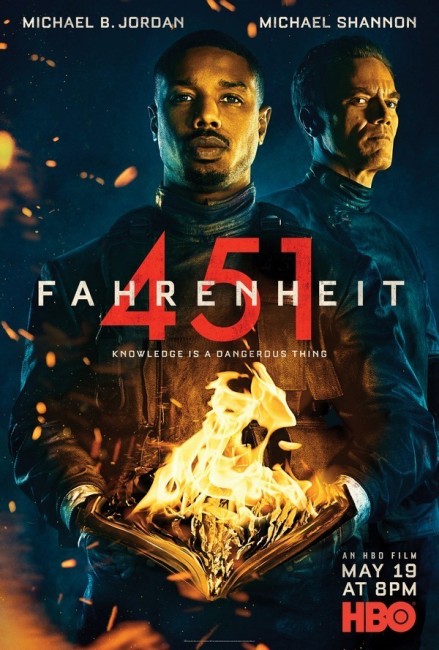 In the future, books have been banned because they spread ideas that lead to social unrest. A special police force known as The Firemen has been formed to root out caches of books and burn them. Their exploits are broadcast to tv audiences. Guy Montag is a Master Trooper with The Firemen in Connecticut who has a strong following on social media. During the course of his duty, Montag meets and is attracted to informant Clarisse McClellan who challenges him to read the books he burns. Montag takes a book and begins to read it in secrecy. Through Clarisse, he is drawn into the underground of The Eels, rebels who have decided to commit books to memory to preserve them.

Ray Bradbury (1920-2012) is one of great science-fiction writers – indeed, his work passed over into mainstream acclaim and he was considered one of the great American writers of the 20th Century. Bradbury produced classics novels like The Martian Chronicles (1950), Dandelion Wine (1957), Something Wicked This Way Comes (1963) and short story collections such as Dark Carnival (1947), The Illustrated Man (1951), The Golden Apples of the Sun (1953), The October Country (1955) and I Sing the Body Electric (1969), among many others. (See bottom of the page for Bradbury’s other films adaptations).

Fahrenheit 451 (1953) is another of Bradbury’s classic works and is often read in schools. In the book, Bradbury postulates a dystopian future where the government burns books. In later years, Bradbury spoke out against interpreting Fahrenheit 451 as a novel against government censorship and states that he intended the book as being about how television presented a death of the imagination and killed off the art of reading. (He was also less than happy when his title was appropriated for Fahrenheit 9/11 (2004) by Michael Moore). The book was adapted to the screen before by Francois Truffaut as Fahrenheit 451 (1966). This has both those who sing its praises and its share of detractors. I am happy to join the former and call it the splendid, well-made film it is – something that seems even more so when you place it up against this 2018 remake.

Fahrenheit 451 has been adapted to the stage, radio and into a comic-book, even a videogame. Since the 1990s, a remake has been planned with names like Mel Gibson and Frank Darabont associated as directors. The remake was finally came about as a film for HBO. The director was Ramin Bahrani, an American of Iranian parentage who had previously made the indie films Man Push Cart (2005), Chop Shop (2007), Goodbye Solo (2008), At Any Price (2013) and 99 Homes (2015). All of these are films that have played at film festivals and gained various prizes there. The sole fantastic work that Bahrani has been previously associated with is the eighteen-minute short film Plastic Bag (2009), which is narrated by a plastic bag as it blows about. Fahrenheit 451 is Bahrani’s first mainstream film.

Ramin Bahrani had one job – pay respect to one of the greatest science-fiction writers of the 20th Century. And I’ll cut him some slack – Bradbury, a writer who is dependent on delicate poetic turn of phrase and imagery, has proven difficult to adapt to film – see the below listed adaptations for examples. Bahrani’s job here was simply to give the plot that Bradbury told life. The one thing that adapting Bradbury does not require is for someone to substantially rewrite, modernise or find a contemporary idiom for the book. In other words the major requirement is not to assume that you, who has made half-a-dozen films all in the social realism categories but none in the science-fiction genre, knows better than one of the Top 10 Great Science-Fiction writers. But oh no, hubris gets its headway. And it is sad to watch this pitfall open up like a vast pothole in the road and Bahrani walk up to it like someone deciding “I wonder what’ll happen if I dive in here.”

In the opening scenes, we see that Ramin Bahrani has made an ill-fated attempt to rewrite Fahrenheit 451 for the modern era. The film starts well against a montage of various classic books being burned – we also see that copies of Beethoven scores, clips of the Moon Landing and Martin Luther King, and copies of Van Gogh and Girl with a Pearl Earring (1665) among the assorted literary works and maybe wonder if the filmmakers don’t know the difference between a painting, tv news and a book but this was still the point I was prepared to cut Ramin Bahrani some slack. However, it just becomes painful when we see that The Firemen’s attempts to make an outcall are filmed as part of a reality tv show – just like an episode of Cops (1989– ) – and then that Montag has social media followers and accrues a bunch of Likes with his actions. Ray Bradbury wrote a novel about how the burning of books represented the death of the imagination. Fahrenheit 451 is a work that has often been interpreted as being about censorship and I didn’t even have a problem if that was what Bahrani wanted to make a film about. But The Fireman’s burnings being livecast for Likes on social media – really?

Bahrani makes a point of setting the film in the contemporary US, having the action take place in Cleveland and pointed images of the US flag flying outside the firehouse as though to say “this is not the future but right now.” We get an aging Keir Dullea as an historian with a speech about how the internet killed journalism and in this we can see that Bahrani is making a muddled argument about how the internet has led to the death of real content in favour of clickbait headlines. During the scene, Michael Shannon also slips in a line about ‘fake history’ as a dig at the current buzzword of ‘fake news’ and the very real problem of facts being regarded as flexible in the drive for clickbait headlines. And in these moments, Fahrenheit 451 2018 almost makes its point – how the world that Ray Bradbury predicts could easily have come to pass from the contemporary one born of post-facts news reporting and the death of newspapers due to internet alternatives.

On the other hand, the very situating of Fahrenheit 451 in the modern internet era kills its premise. Bradbury was writing in 1953 when a book was a physical medium printed on paper. By 2018, the actual publishing of a book on paper has rapidly declined and you can easily obtain most texts in various e-reader formats. The glaring flaw that seems evident in such a world is if you burn all the paper books, how then do you prevent the mass distribution of the same texts in electronic format? Do you go around burning e-readers? The film is not unaware of this as we see a scene where Montag smashes a computer as it is uploading a large swathe of texts to the web and The Firemen later throw the computers on their fire. But surely Bahrani must be aware that that does not end the problem? I mean if a country as close as Canada still celebrates literacy (as the film implies) then it and other countries not run by book-burning autocracies must have a wide proliferation of online libraries so what is being done to stop the US populace simply going online and accessing e-texts? The film has no solution for such a question and basically ignores it.

And I won’t even get to the whole subplot about the Omnis. I reached the end of the film without a clue what the Omnis were – something The Firemen are greatly upset about, has to do with DNA and involves a bird but beyond that the film is utterly vague. Indeed, why exactly it even needed the Omnis subplot is a major scratch of the head. It also leads to the supreme letdown of the ending. The novel ends with The Book People as the last hope after the outbreak of nuclear war; the 1966 film ends with the haunting image of the Book People wandering in a snow-filled forest memorising their books. By contrast, the film here ends with the overwhelmingly anticlimactic image of Montag freeing a bird from a burning barn and releasing it to fly off to Canada.

I do credit Ramin Bahrani as there are times when Fahrenheit 451 almost works. He has the good fortune to have cast Michael Shannon in a bad guy role. I never much cared for Shannon as an actor but he seems to have suddenly found himself in villain roles recently – he also did superbly in The Shape of Water (2017) just before this. Here the film works whenever Shannon is allowed to be bad and Bahrani comes to the party giving him a series of well-written speeches justifying what he does and ruthlessly attacking all other viewpoints. The film as at its best when Bahrani gets Shannon and Michael B. Jordan on screen together, in particular a scene where Shannon forces Michael B. Jordan to read a book in front of his work colleagues as he sets each page alight.

Other Ray Bradbury screen adaptations are:– the aforementioned The Beast from 20,000 Fathoms (1953) from his short story The Foghorn; the alien invader classic It Came from Outer Space (1953) from his original screenplay; The Illustrated Man (1969) from his short story collection; the dreary tv mini-series The Martian Chronicles (1980) based on his classic book; the tv movie The Electric Grandmother (1980); the screenplay for the fine Something Wicked This Way Comes (1983) from his own novel; a Russian-made Bradbury anthology The Veldt (1987); his screenplay for the animated adaptation of the classic comic-strip Little Nemo: Adventures in Slumberland (1989); the tv anthology series The Ray Bradbury Theater (1986-92) where he adapted his own stories and hosted the series; the screenplay for the animated children’s film The Halloween Tree (1993); Stuart Gordon’s adaptation of The Wonderful Ice Cream Suit (1998) about a seemingly magical suit; and A Sound of Thunder (2005) based on Bradbury’s classic time travel story; Chrysalis (2008) where a man mutates into another lifeform